In today’s society drinking water from a plastic bottle has become the norm, but just a few decades ago this action was not the case. During the late 70’s a French company named Perrier introduced bottled water to America and convinced people of the fact that drinking water from a bottle would make people look cool, so they advertised a new fashion of consuming this precious liquid. Companies like Coca-Cola and Pepsico saw the opportunity to start a division of bottled water as an alternative to soda drinks, so this high revenue business started.

Turn in your highest-quality paper
Get a qualified writer to help you with
“ Advantages of Tap Water ”
Get high-quality paper
NEW! AI matching with writer

Bottled water sales skyrocketed during the 80’s and 90’s thanks to heavy advertising on TV, radio, and billboards which made people to believe that bottled water exceeded the quality of tap water. Tom Lauria, vice president of communications for the International Water Association, stated, “Once reserved for Perrier-sipping elitists, bottled water has become a drink of the masses.

15). According to Tom Lauria, in 1990, 2.2 billion total gallons of bottled water were sold worldwide. In 2007, it was 8.8 billion. In just the last year, wholesale dollar sales for bottled water grew 7.8%, to $11.7 billion in 2007, according to the bottled water trade group. Bottled water became very popular for different reasons; convenient to carry around, no need to wash the containers, and available almost anywhere. But, people must stop to think for a minute about the consequences and the impact caused to earth’s environment because of the choice made by so many people to drink water from a fancy plastic bottle instead of tap water, in most cases safer and less expensive.

Improper recycling of plastic bottles has caused devastating damage to the earth’s environment and fragile ecosystem. Only about 20 percent of all plastic bottles get recycled, the other 80 percent end up in landfills, river streams, and finally washing off in the oceans. For those bottles that finish in the landfills the process of biodegrading may take hundreds of years. “Plastic is a material that earth cannot digest. Every bit of plastic ever produced still exists and will be here with us for hundreds of years. Once in the environment, plastic breaks down into smaller and smaller particles that attract toxic chemicals, are ingested by wildlife on land and in the ocean, and contaminate our food chain” (Maqueda, par.1). Most people that drink bottled water ignore or do not care about the impact plastics cause to the ecosystem of earth. In fast pace cities around the world and especially in American, people have become a fast food mind-oriented type of consumers, always looking for convenience. One can see why people tend to drink bottled water instead of tap water; convenience, portability, and taste.

But nations all over the world can experience the cause and effect resulting from the irresponsibility of their citizens to take action in the recycling of plastic bottles. Some people may argue that recycling plastic bottles will not resolve the pollution problem around the planet, but it will reduce the damage to the environment considerably by drinking less bottled water and more tap water. People must stop and consider the effects caused to mother earth when drinking bottled water. Parents, teachers, and government urge others to learn to recycle; but the problem also lies on the companies that produce so much bottled water without strict government supervision on quality and environmental issues.

The cost of drinking bottled water exceeds tremendously the price of tap water. Unfortunately most people do not know that tap water may surpass the quality of bottled water. A person that drinks tap water can save more than $800 in a year and will help to reduce the amount of more than 200 plastic bottles in a lifetime period. In addition, this action in return will contribute to save oil used to make most plastic water bottles.

Marine life has changed drastically due to the ocean pollution called ocean garbage patches. Plastic bottles became the most common marine litter in many parts of the globe, which equals about 80 percent of all litter found in several seas and oceans. The oceans natural ecosystem will continue to degrade by the tremendous quantities of plastic debris dumped in them; which will endanger the health of sea animals and plants. People must a different approach when opting to drink bottled water; although bottled water has some advantages over tap water, the damage caused to earth will forever have an impact on future generations. Other issue arising from drinking bottled water may reflect on people’s health. Plastic bottles are made with polyethylene terephthalate (PET or PETE) known to cause cancer. “Since BPA has been linked to low sperm counts and an increased risk of breast and prostate cancer, scientists like vomSaal and Hunt suggest avoiding reusable bottles made from plastic.

They also raise serious concerns about the potential for other plastic chemicals to leach out of typical PET water bottles especially if they sit in the hot sun” (Knopper, par.23). Many scientists concerned with the impact on people’s health when drinking bottled water have researched and found pollutants in bottled water due to the leaching from the chemicals used in the manufacturing of plastic bottles. Customers purchase bottled water completely unaware of the facts how plastic can affect their health, because people do not take the time to research how bottled water is produced. Finally, the mining of water supplies in rural areas in the United States have conservationists working with communities for support in stopping bottling companies from using their natural resources. Companies like Nestle, Coca-Cola, and Pepsico have purchased the rights to extract water in many states where water is abundant; in defiant opposition of the people against the over mining of people’s water resources. Overall, drinking bottled water comes at a high price, affecting the environment, economy, and people’s health. The inhabitants of this world must become sociably responsible for protecting this fragile ecosystem and become more environmentally conscious. 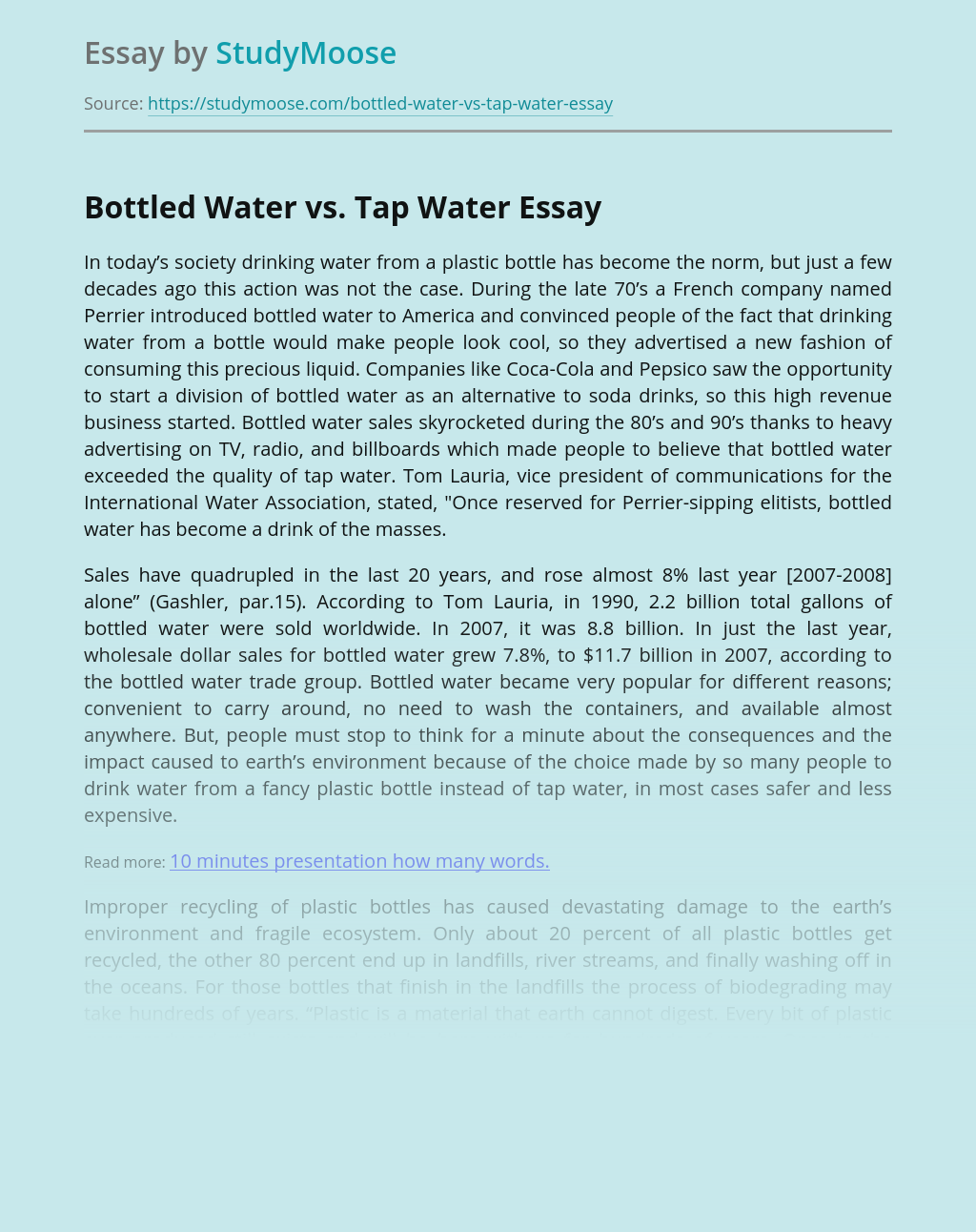 Turn in your highest-quality paper
Get a qualified writer to help you with
“ Advantages of Tap Water ”
Get high-quality paper
Helping students since 2015
Stay Safe, Stay Original