Advantages and Disadvantages of the HPV Vaccine in Adolescent Girls: An Ethical

Don't use plagiarized sources. Get your custom essay on
“ Advantages and Disadvantages of the HPV Vaccine in Adolescent Girls: An Ethical ”
Get custom paper
NEW! smart matching with writer

Out of the many types of HPV types, most end up causing warts on one of the above-mentioned areas, while a certain few are known to cause cervical cancer. Lockwood-Rayermann & McIntyre (2009) state that “[t]he most common oncogenic/high-risk virus types worldwide and in the United States are Types 16, 18, 31, 45, and 52; 11% of invasive cervical cancers in the United States are caused by Types 16 and 18 (55% by Type 16 and 22% by type 18).

HPV Types 31, 45, and 52 comprise another 8% of all cases.” Cervical cancer is usually not detected until it is quite advanced, which is why women should get screened for cervical cancer regularly. There is also another precaution women can take. The Food and Drug Administration approved the very first vaccine to prevent cervical cancer by the types of HPV that cause it in June of 2006 (Thomas, 2008). This vaccine, being new, and therein little is known about its long term effects, has caused ethical debates about the use of it, particularly in adolescent girls.

Thomas (2008) mentions that the CDC recommended, by a unanimous vote, that girls aged 11 to 12 years old receive this new HPV vaccine. This may seem young, but in order for the vaccine to be effective, it must be administered before a person has been exposed to HPV, which happens during sexual encounters. Since few girls are sexually active at this age, most of whom haven’t gone through puberty yet, this is an ideal age to have them be vaccinated (Thomas, 2008). Thomas (2008) also goes on to say that this vaccine has been administered to 11,000 girls around the world with no serious side effects. Their ages ranged from 9 to 26 years old.

This vaccine is given by a series of three shots over the course of six months and it’s important that they get all three to be effective, since little is known about the effectiveness of people who only receive one or two (2008). But is it ethical for a girl as young as nine years old to be receiving such an invasive procedure in order to avoid a sexually transmitted disease? After all, what nine year old is even thinking about sex and STDs? That is why this issue is one that is left for the parents to decide, and opinions are unsurprisingly mixed.

One of the main arguments against vaccinating young girls with the HPV vaccine is cost. Thomas (2008) lists the total cost of this vaccine, for all three shots, as around three hundred dollars, relatively inexpensive considering the detrimental consequences of contracting one of the types that are known to cause cancer. There is another issue to take into consideration, though, when accounting for the price of this vaccination; the effects for protection are only estimated to be four or five years (2008). If a young girl were to be vaccinated at nine years old, and again at ages twelve, sixteen, and twenty, you are looking at close to one thousand dollars in total.

How are parents with poor health insurance coverage or none at all supposed to protect their daughters for this virus that can cause cervical cancer? A parent can also anticipate losing a day’s pay to take their child to the doctor’s office or the clinic on three different occasions to receive all three shots. Because of the cost, and the limited duration of effectiveness, a lot of women decide not to get vaccinated and not to vaccinate their daughters, hoping that a better, longer lasting, and less expensive alternative will “arrive on the pharmaceutical market” at some point in the near future (2008).

Another popular argument against HPV vaccination is that some parents view it as a green light for their daughters to behave promiscuously (Thomas, 2008). Much like condom distribution at high schools, there are those that view HPV vaccination as another way to promote, and cause a rise in irresponsible sexual behavior (2008). Thomas (2008) goes on to describe a conservative political group called the Traditional Values Coalition and how they have publicly denounced the HPV vaccine and claim that genital warts, cervical cancer, etc. are not a national health concern, and “that HPV can be prevented through abstinence and marital fidelity.” This group attributes “monetary gain” by pharmaceutical companies as a motive for the mandate for HPV vaccination.

Like most every ethical or moral dilemma going on in this country, this issue rests in the parents’ religious and personal beliefs. Studies have shown that despite abstinence programs, teenagers still engage in sex, proving that something as insignificant as a vaccine is not going to encourage kids to have sex—they are having it anyway. Thomas (2008) cited a study that showed that 90% of teens are using condoms when they engage in sexual intercourse, but condoms alone cannot protect you from HPV, making the vaccine all that more important for young girls to receive. If a parents cannot set aside their religious and personal beliefs long enough to acknowledge that this vaccine has the potential to save their daughter’s life, then they may require a lot more than just education.

Each year 6.2 million new cases of HPV come about and currently, 20 million people in this country are infected with HPV. The vaccine that is available has the potential to save 70% of the people it would otherwise infect from cervical cancer in young women (Thomas, 2008). “In 2008, an estimated 11,070 women in the United States will be diagnosed with cervical cancer, and 3, 870 women will die from the disease” (Lockwood-Raverrmann &McIntyre, 2009). Lockwood-Raverrmann & McIntyre (2009) go on to explain that the prevalence of HPV in peaks in women in their early twenties, and also go on to say that even younger women, i.e. teenagers, are more susceptible to the virus. They describe one possible explanation for this is because in younger women, it “could be the changing histology of the cervix following the commencement of puberty.” They go to say that “during this period of time, large populations of cells are undergoing maturation and are more susceptible to the development of an HPV infection” (2009).

With all of this statistical data, it is confusing to think that some little girl’s parent’s are prepared to deprive her of a vaccine that could potentially save her life should the opportunity arise and she chooses to have sex. Again, said girl wouldn’t even have to have vaginal intercourse to contract Type 16 HPV, which would years later cause cervical cancer in which she could quite realistically die from. It is a frustrating and infuriating thought—that this girl could die because of her parent’s ignorance and/or their undyin

Advantages and Disadvantages of the HPV Vaccine in Adolescent Girls: An Ethical. (2016, Mar 07). Retrieved from https://studymoose.com/advantages-and-disadvantages-of-the-hpv-vaccine-in-adolescent-girls-an-ethical-essay 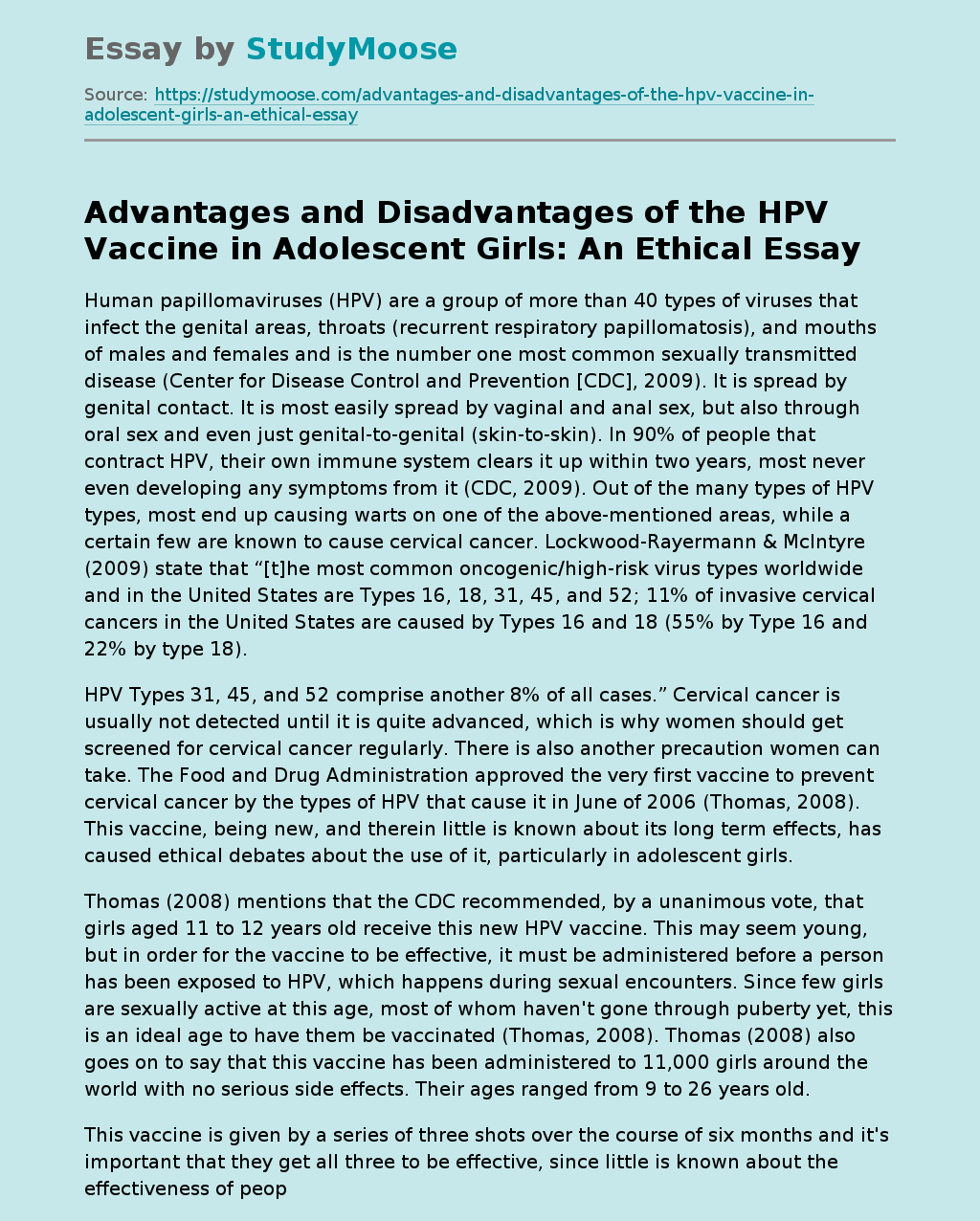