The following interview was conducted with the subject known as “George” who is in the middle adult stage of life. George is 48 years old and is an auto mechanic. He lives at home with this wife and two daughters in San Diego, California. George is in Erik Erikson’s seventh stage of psychosocial development which is the Generativity vs. Stagnation stage. In this stage, work and parenting are important factors that affect his life.

e., alcohol, caffeine, smoking); significant changes in sexuality from young adulthood; stage in menopause; sleep patterns; sexual dysfunction/satisfaction; are they above or below life expectancy; accidents

As a person grows in age, along comes physical changes and possible health problems. In George’s case, he appears to be very physically fit; however, I learned from the interview that he previously had some health issues that involved hospitalization which caused him to recently change his dietary habits.

George was at risk of having a series of colon cancers and constantly had excruciating stomach pains. After being hospitalized for three days, the results showed no positive signs of cancer but his doctor gave a strict diet and urged him to exercise more regularly. When asked about his current eating patterns and physical activities, George revealed that he makes an effort to eat more vegetables and fruits and has cut off on fried foods and carbohydrates. He also makes sure to take a walk to the park near his home with his wife every day after dinner.

George does not smoke but he does occasionally drink alcohol and caffeine. His alcohol and caffeine consumption is low which is why they do not have a significant impact on his health. He described that as he gets older; his sleeping patterns have been changing as well. He used to be able to stay up past midnight but now he gets tired very easily and must sleep before 10 P.M.

Cognitive Characteristics: Piaget’s sub-stage; changes in intellectual abilities; speed/accuracy of information processing (you can use a memory test); changes in creativity/learning

According to Piaget’s theory on the formal operations stage, adolescents should have the “capacity for flexible, reversible operations concerning abstract ideas and concepts, such as symbols, statements, and theories” (Rathus, 2013). Rathus also discusses that adolescents perform hypothetical thinking, which is when they systematically try out different possibilities in their minds to solve a problem. Formal operations give the adolescent skills of logical thought, deductive reasoning, and systematic planning to assist their problem-solving. In terms of Patrick’s hypothetical thinking from the interview, he seems to be on track with this level of thinking. For example, I asked him about what approach he takes when solving a problem and he said that he takes into account all of the different options he has and does everything one step at a time.

Piaget coined adolescent egocentrism as comprehending ideas of other people, but having difficulty sorting out those things that concern other people form the things that concern themselves (Rathus, 2013). I tested my subject’s cognitive development by giving him a preset list of 10 vocabulary words and asking him to define each word to the best of his ability. I gave him a minute to clearly define the word. He defined 8 out of 10 words correctly which shows that his cognitive skills are on the right path. Patrick admitted that he used to struggle with balancing school and sports and had to attend tutoring lessons to raise his grades. He now has a 3.6 GPA and is expecting to attend San Diego State University in the fall. His strongest subject is math and science.

According to Erik Erikson’s psychosocial development, adolescents go through the ego identity versus role diffusion stage where they are figuring out who they are as a person. Branching off of Erikson’s approach, James Marcia proposed four identity statuses that he believes represents a stage an individual is going through in seeking their identity: identity diffusion, identity foreclosure, identity moratorium, and identity achievement. Adolescents in high school usually move from the diffusion and foreclosure stage to the moratorium and achievement statuses (Bartoszuk & Pittman, 2010).

I also discussed the topic of stress with my subject and he revealed that school is his main source of stress, “I just applied to colleges last fall and finally received some acceptance letters last month. I have been stressing like crazy and thought I wouldn’t get into any schools!” Patrick appears to have a strong sense of self-concept and also high self-esteem. He described himself as “responsible, friendly, and competitive” and that having supportive friends and family have helped him maintain a good self-esteem. In regards to sexuality, Patrick said that he is interested in girls but does not have anything against homosexuality as he has friends who are gay and lesbian.

Social Characteristics: Typical interactions with others, with you; evolution of parent-child relationship; grandparenting; change in caring for parents; relationships with siblings/friends; widowhood

According to the textbook, adolescents are “heavily influenced both by parents and peers” (Rathus, 2013). When asked about his interactions and relationships with others, Patrick described his friends and family as the most important aspects of his life. He and his father used to play basketball together when he was younger which fueled his love for the sport. Although he is a part of the school’s basketball team, he does not consider himself to be a jock or popular. Aside from basketball, Patrick enjoys playing video games and is interested in computers. He described himself as an “average teenage boy who loves playing sports and all things electronics.” The relationship between his family members and friends were also further discussed in the interview. Patrick says that he has not have much time to spend with his family since high school started but his relationship with his parents has grown stronger as he grows older. Patrick and his sister are four years apart in age and have a very strong bond. They both play basketball which Patrick said has created a “friendly sibling rivalry.”

Patrick described that an average Sunday with his family consisted of going to church, having brunch, going to the beach and then renting a film from Redbox. Patrick thinks that his parents are “strict but flexible at the same time.” I asked him to elaborate more on this thought and he explained that they have high expectations for him in regards to his education and that “they told [him] that [he] needs to have a 3.5 GPA and above to participate in any sports” which motivates him to do well in school. His parents have helped him look into different universities and career path options but it is ultimately his decision on what he wants to do with his future. The textbook describes this type of parenting style as the authoritative style in which parents “know what they want their children to do but also respect their children and are warm toward them” (Rathus, 2013). This parenting style usually contributes to an adolescent’s sense of high self-esteem and independence.

The circle of friends that Patrick interact with share many similarities, they play the same sports and video games, and also like to listen to the same type of music. When asked what he and his friends do for fun after school or on the weekends, Patrick said that they usually go to one person’s house and just play a game of NBA 2K14 for a couple of hours or play a few games of basketball. He described his relationship with his friends as “chill and fun.” In regards to his dating life, Patrick’s relationships tend to be rather short; his longest relationship lasted for about six months. He shared that there is a girl who he is interested in and plans to ask her to the senior prom coming up in a few months. Patrick previously had a part-time job at a retail store but quit due to his grades dropping. It has been proven that “adolescents who work after school obtain lower grades” (Rathus, 2013).

According to Lawrence Kohlberg, adolescence is the period in life where individuals become capable of formal-operational thinking, allowing them to make decisions by using ethical principles (Rathus, 2013). Patrick defined a rule as a set of principles that should be strictly followed. I asked him why he thinks rules should be obeyed and to give an example of when it is okay to break a rule and his response was, “rules are made so that things will run smoothly” and “rules can be broken if it is necessary to save someone’s life.” Based on this response, Patrick is taking the perspective of stage 6 of Kohlberg’s postconventional level of moral development in which it is acceptable to break a rule/law in order to preserve a life regardless of the consequences this may bring.

I enjoyed doing this interview because it gave me a better understanding of how it would be to personally interact with another human being especially since I am interested in majoring in Human Development. It was quite intimidating and nerve-racking at first since I have never interviewed anyone before and I felt very inexperienced. By the middle of the interview, I felt less anxious and began getting the hang of it. After the interview, I realized that I should have asked more questions in regards to moral development. Overall, this was a great learning experience and I feel more confident for the next interview that I will have to conduct for the class. I look forward to using the skills I learned from this interview and applying it for future experiences.

Adulthood Interview. (2016, May 31). Retrieved from http://studymoose.com/adulthood-interview-essay 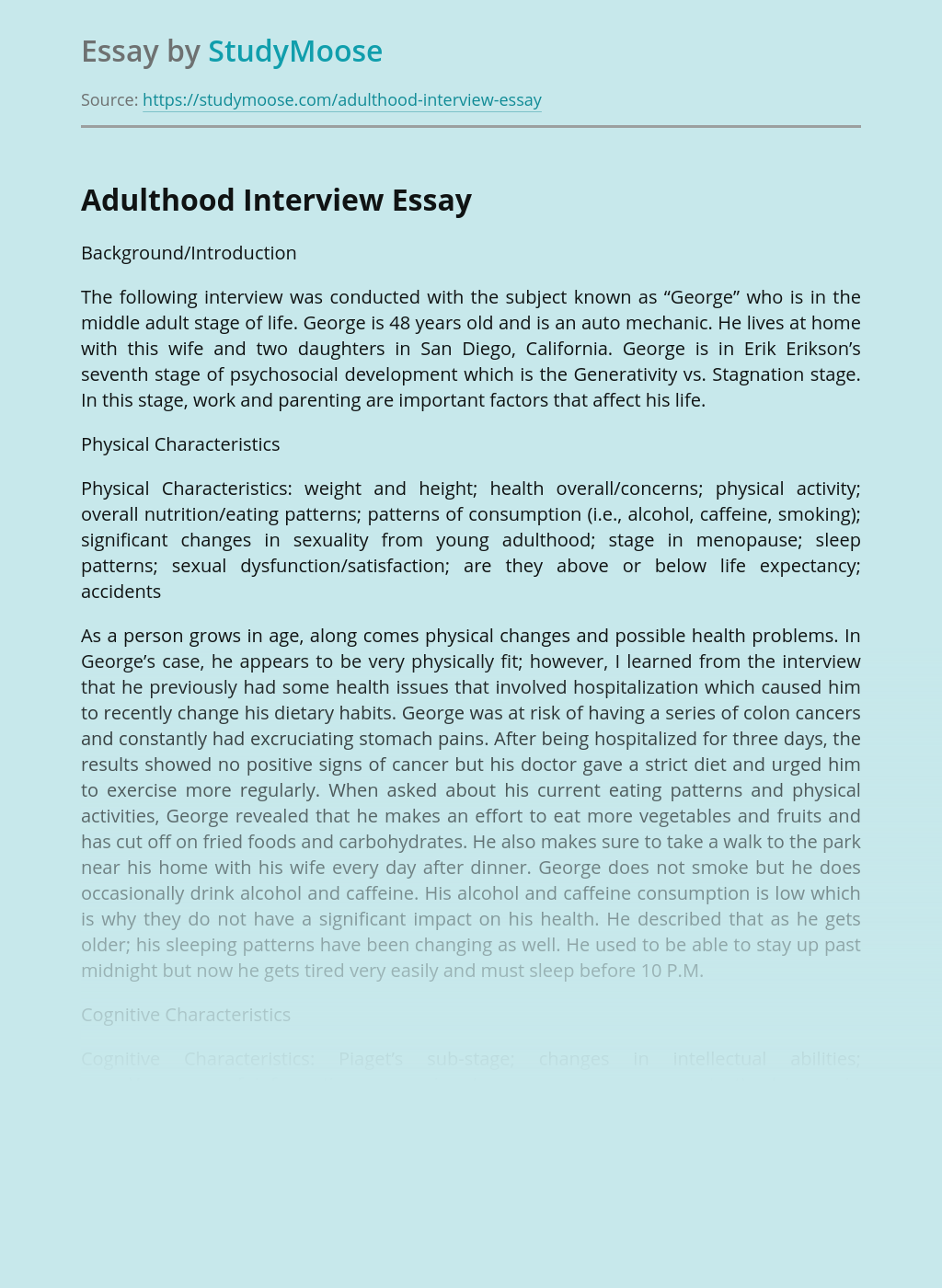