1. Cross the chasm: In general, Adobe made PostScript and PDF free to general users in order to spread out the influence. As these technologies were truly helpful and needed to the customers, gradually they became the de facto standards in the industries. By then, when the third party wanted to work with the users, they had to purchase the license; or for users who wanted more functions, they had to purchase full version of product. That was when Adobe started to make money.

More specifically, PostScript provided an interface between a computer program and an output device.

Adobe targeted the graphic art community and the publishing industries, where this product was highly needed. The PostScript page description language was introduced freely to software developers and then was licensed to the printer manufactures that wanted to print those documents. By a successful alliance with other firms, Adobe built a system of products, and thereafter more and more people started to use it.

And as PostScript became standard, the revenue of company grew dramatically. As for PDF, Adobe made it a universal format for users to convert electronic document into. As internet exploded, Adobe quickly switched their target to the internet users and made Acrobat Reader free to them.

This action helped intensely to spread PDF forms. With its easy accessibility and some alliance with AOL and several computer vendors, PDF became popular and widely used for posting and exchanging documents on Internet. And as people needed more functions like creating PDF, they could purchase the full Acrobat product.

That was when the sales started to grow up and the company started to make money.

Whole product strategy: Firstly Adobe created the PostScript technology to help user easily print out their document. In order to do so, they developed the page description language for programmers, and sold interpreter of language for printers, as well as sold fonts to end users as added value. As they built up the business, they also provided the technical support to solve problems and improve performance. Then they created PDF format which helped with the exchange of documents between users. Adding on to Acrobat Reader, they served charged features when users needed more functions, such as the ability to create PDF files, to smooth out the workflow of traditional print publishers, and to emphasize on Digital Rights Management.

2. There are several contents to compare the positions of Adobe and Microsoft in the eBook space. While most publishers were willing to accommodate both PDF and Microsoft Reader formats, Microsoft had some exclusive deals. However, Adobe had its strong historical relationships with publishers and a lot of print titles were already in PDF format. Though PDF format occupied the majority of smaller online eBook store, Amazon, who played the dominant position, favored Microsoft. As Adobe dominated the desktop readers, Microsoft obtained the market in PDAs.

Adobe was ahead of Microsoft in protecting digital rights management, yet Microsoft was good at making buzz to the public. Overall, the two companies were occupying different areas of the eBook space, and it is not easy to conclude who was in a stronger position. I think Adobe had very slight advantage for the reason that it had a historical position as a leading provider of technology and standards to the traditional publishing industry. However, Microsoft had already caught up and aggressively moved into the eBook space, especially the dominant position in Amazon eBook store made itself more favorable in the market. Adobe had to fight hard, or they could easily lose their position in the market.

3. In my opinion, Adobe should keep trying hard to make PDF a standard but at the same time to create a new standard in some related field, such as the digital rights management where there was strong need and not yet touched by anybody. They can make creating PDF free or reduced price. I do not think they can count on making money from it as other companies can easily make similar products free for users, and then they will lose their compatibility in the market. Instead, they should find out some other related fields and create another new standard to let others to follow. 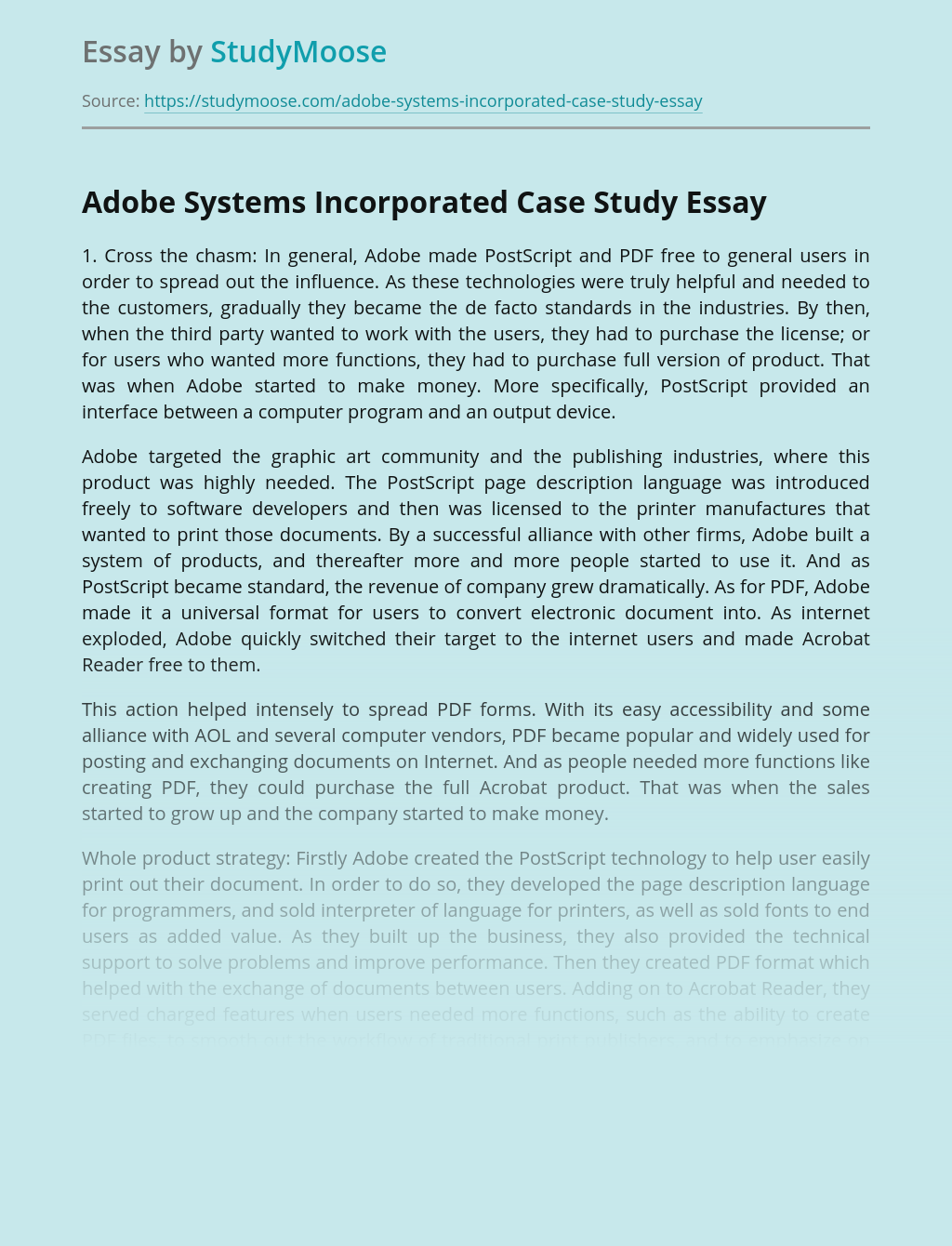