In The Awakening, Edna Pontellier never truly accepts the values of Creole society and does not conform to the social norms that are placed on women. She does not like to take care of her children and wishes to be independent from her husband, whereas Adele Ratignolle is her antagonist and is a “mother-woman”. She is a Creole and accepts the social conventions. Her family comes first in her life.

The narrator compares Adele with Edna through their perceptions on the role of wives.

Don't use plagiarized sources. Get your custom essay on
“  Adele Ratignolle Vs Edna Pontellier Compare In Novel ”
Get custom paper
NEW! smart matching with writer

Men are very dominant in the Creole society and women are expected to be subservient to men. Women have to be responsible of looking after their own families, pay attention to their husbands and do household chores. However, Edna does not have much interest in listening what her husband, Leonce Pontellier, says. She “evinced so little interest in things which concerned him, and valued so little his conversations” (5). When Leonce talks to her about gossips and other information that he has heard at Klein’s hotel, Edna simply utters a few words.

Leonce also orders her to come into the house immediately when they are at Grand Isle, but Edna does not follow his command and “perceived that her will had blazed up, stubborn and resistant” (31) and even responds firmly that “don’t speak to me like that again”. She also does not return the visits of her callers and eventually abandons her Tuesdays at home. Edna does not place Leonce before herself and does not willingly follow his command after she has been awakened by swimming in the sea, listening to Mademoiselle Reisz’s music and developing feelings for Robert.

She has become a very strong woman who dares to challenge social norms and fights back when being revoked by Leonce. She is not willing to be subordinate to men.

Moreover, she is not a “mother-woman” (8). She often leaves housework to the maids and children to the quadroon. Although Leonce has complained about her cooking skills, she does not learn how to cook better. She does not enjoy cooking to meet the expectations of Leonce as cooking is a burden and responsibility to her in this way and she only enjoys cooking when she is alone. She also dislikes sewing. “She could not see the use of anticipating and making winter night garments the subject of her summer meditations” (8) even though her companion, Adele, is so passionate in sewing for her children. She feels relieved when her children visit their grandmother as she is free from her responsibility and can paint alone. She pities Adele for living a peaceful domestic life and does not want to be a housewife. She also admits that she would not sacrifice herself for her children or anyone and would stay true to herself.

As for Adele, she is an obedient wife who only follows her duties and does not challenge social norms. She is like a “ministering angel” who “idolized” her children and “worshipped” her husband (8). She enjoys doing housework, such as sewing for her children. She likes pampering her children and gets along with her husband and was interested in what he says, “laying down her fork the better to listen” (57). When Edna tells her that she would not give herself, she replies that a woman who sacrifices herself for her children cannot accomplish more than that as stated in the Bible. She does not realise that soul-searching means more than the physical existence.

Apart from that, the narrator compares Adele with Edna by showing that Edna urges for independence, while Adele is exactly the opposite and confined to her own small world. Edna feels “an indescribable oppression” after Leonce demands her to take a look at Raoul who has a high fever and it turns out there is nothing. She has been awakened by the sea and realized “her position in the universe as a human being” (13). She enjoys freedom and is reborn in the vast expanse of the sea. Later she realises her sexual awakening and autonomy through falling in love with Robert and having an affair with Alcee Arobin. She has become passionate towards Robert and desires him. She tells him that “I am no longer one of Mr. Pontellier’s possessions to dispose of or not” (109) and only she can give herself away. Although she is Leonce’s wife, she knows she has the right to choose who she loves. She also kisses Alcee and enjoys his caressing as she wants to satisfy her animal urges.

She buys the “pigeon house” and sustains her living by selling her sketches, using the money from her mother’s estate which is sent by his father and the money that she has won in the races. She is financially independent and free as she does not need to rely on Leonce. She can pursue what she wants without being trapped as his possession in his house.

Originally, she did not feel comfortable to express her feelings and being around affectionate people, but now she dares to reveal her feelings. She has become a woman ahead of her time and speaks “a language which nobody understood” (1), like the caged parrot that speaks Spanish.

On the contrary, Adele is a conformist and confined to living in a patriarchal society. She is like a mockingbird which is caged and has limited freedom. As a mockingbird, one only knows how to echo society’s values and fails to develop independent thinking. She is also being compared to a “ministering angel” (8). She has wings which only serve to protect her children, but she has no intention to fly and explore the world. When Edna tells her she will not sacrifice for her children and will only stay true to herself, Adele cannot comprehend at all because she only knows how to follow her duties. She thinks as a mother, one is responsible to protect her children and put her husband’s interests before her own. She only knows how to do housework chores such as sewing, cleaning her home, learning music to entertain the family, but she does not think of the possibilities that a woman can achieve without relying on her husband or caring for her family. She fails to think a woman can be much more autonomous if she does not have to be responsible of taking care of her family. One can have a lot of time to herself and pursue what she wants, like indulging in a hobby.

She, like Creole husbands, does not tolerate for infidelity and people’s passionate and intense affection for each other. She reminds Robert not to flirt with Edna who may take it seriously, but she fails to see the intense bonding between Robert and Edna. Later she advises Edna that she should not live in the “pigeon house” and see Alcee who is a womanizer so as to keep her reputation. She reminds Edna that she should not neglect her children after she has given birth to her child. She is an oppressor which suppresses Edna’s freedom and constantly reminds Edna of her duties as a wife. As her friend, she does not even support Edna. She has no idea that she is trapped and knows not the taste of independence.

The narrator compares Edna with Adele by conveying their different purposes of using arts as well. Mademoiselle Reisz tells Edna “the artist must possess the courageous soul” (64). She has been awakened and embarks on a journey of finding her voice and expressing herself. She dotes on painting in her room, but she can only paint when she feels happy. Although Leonce complains that she neglects her children and should not waste time on painting, it further moulds her into a person who is spirited and it does not deter her from painting. Her atelier, which is located at the top of at the house, is her private space in Leonce’s house. She does not want to be Leonce’s possession and finds a way to escape the patriarchal world.

She has drawn her children, quadroon, Ellen the maid and even Alcee. She has no particular preference for her choice of subject as she only seeks to express herself and to escape the world through art.

As mentioned above, Adele is not one who puts herself before her family and is bound by social norms. She plays music in order to entertain her family. Leonce told Edna that Adele can strike a balance between playing music and keeping everything else in order, unlike Edna. In the patriarchal world, a woman is suppressed in a sense that she cannot indulge in any particular activity and has to sacrifice her interests for her family. Adele plays the piano to brighten her home and entertain people, but not for herself. She does not create music of her own and fails to use art to identify herself and entertain herself.

Furthermore, the narrator compares the appearance of Edna and Adele. Edna is described as a handsome woman. Her eyebrows are “thick and almost horizontal, emphasizing the depth of her eyes” (3). She also suffers from sunburnt when she bathes on a beach at Grand Isle and her skin is probably darker than Adele. Her body is not the “trim, stereotyped fashion-plate”. There is a sense of nobility and gracefulness about her appearance though she may not look stunning at first sight. Conversely, Adele is more feminine and matronly. Her complexion is fairer than Edna and looks like a “faultless Madonna” (10). She has golden hair, sapphire blue eyes and cherry-colored lips. Her hands are delicate and her arms are slender. In Kate Chopin’s works, women who are independent and not motherly are portrayed as handsome people and their appearances are usually not feminine or stunningly gorgeous, while motherly women are described as feminine and angelic. This comparison is to show that if women play their role as society expects them and do not challenge social norms, then they are seen as beautiful and feminine people. Those who defy social norms are perceived as a threat to society and are not feminine or stunningly beautiful.

Edna is a dynamic and round character who has transformed into a strong and independent woman who attempts to voice her opinions and find her identity, while Adele is a flat character who only follows her duties and accepts all social norms. Edna chooses to stay true to herself and fights for independence rather than sacrificing her interests for her family, while Adele places her family before herself. Edna uses art to express herself, but Adele plays music just to entertain others. The difference in their appearances also marks the contrast between their personalities and mindset. 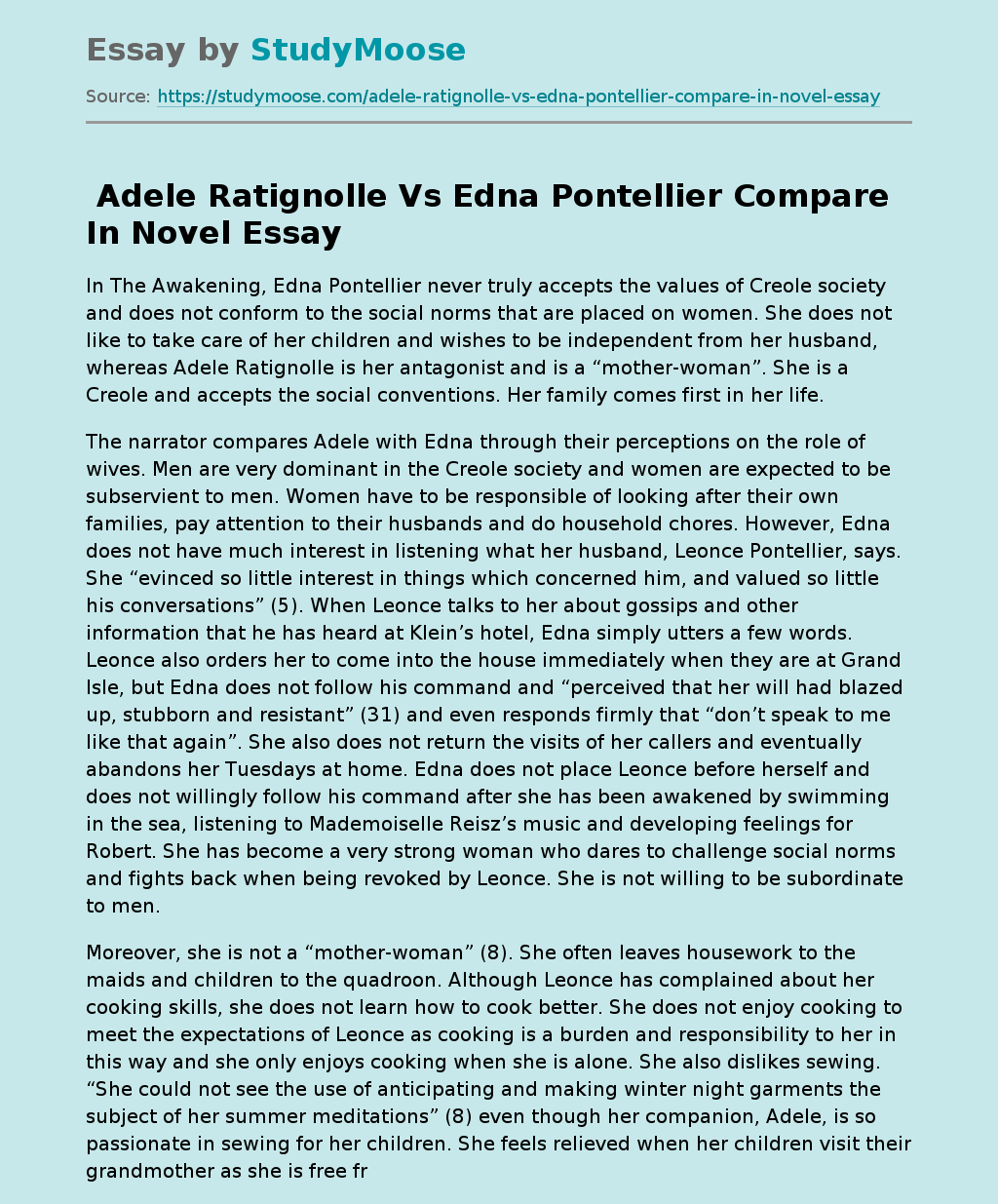