Today, the ease of Internet access worldwide has made it one of the most popular media of seeking information and for communication. However, as the Internet is being considered as a highly enlightening and entertaining media, people tend to engage in several activities on it, some of which may be potentially addictive. One such event is the use of social media. Social media has become a global phenomenon and an essential means of communication among peers, families, and friends. Studies stated that “social media is a communication channel which is very popular, extremely fast, broad, has proven to be highly effective and as well as conferred by billions of folks to participate and learn content concerning people, brands, information, and recreation “.

Don't use plagiarized sources. Get your custom essay on
“ Addicted to Social Media? ”
Get custom paper
NEW! smart matching with writer

Due to this, people can communicate easily with everyone anytime they want. Undoubtedly, the introduction of social media in the last decade has primarily attracted many people. Thus, the mass appeal of social media could be an issue of concern, especially with regards to the steady increase in the time people spend online that may affect and influence their behaviors.

The excessive use of these platforms is alarming enough, as this could lead to social media addiction.

Besides, addiction as described by the American Psychological Association (2014), addiction refers to “compulsive behavior that leads to negative effects ” wherein, like in other forms of addictions such as drugs, gambling, video gaming, overeating, etc. On the other hand, as people are being addicted to social media, they tend to get influence with the things they have seen and encountered in these platforms.

This is a severe problem for this could negatively impact people’s behavior, which is evident in their actions in their daily lives and interactions. Undeniably, the magnitude of the use of these various platforms has become a cause for concern in recent times. In this premise comes the interest of the researchers to know the effects of social media addiction to the behavior. This study is primarily supported by the Uses and Gratification Theory proposed by EhlinKants in 1959 for the reason that this theory is an approach to gaining insight on how and why people look for particular media to satisfy specific needs. With social media thrusting individuals closer to one another, more than ever leading to one of the best media for communication, and offering a wide variety of entertainment, users nowadays have been very dependent on it and even using it excessively on their day-to-day life thus, as social media addiction is becoming a joint disorder to today’s generation.

How Addiction to Social Media Happened

There are about 2.03 billion social media users. That comes to about 27% of the total world population. Social networking, in general, accounts for 28% of all time spent on the Internet. Which is a reasonably large proportion because several other activities can be conducted online? People between the years of 20 to 29 spend 2 hours on social media, while ages 15 to 19 spent a minimum of 3 hours a day. The fact that 18% of social media users cannot go on a couple of hours while not continually checking Facebook shows us that people are indeed addicted to social media.

Accessing social media platforms such as Facebook and Twitter are only a touch away now. Therefore, the increased accessibility allows and encourages spending more and more of our time on these various social sites. Also, it can be demonstrated that unlike smoking, which can directly affect our lungs, social media does not affect us physically. However, the only way to access social media is through a screen. Screens emit blue light, which signals our brains and prevents us from sleeping. For instance, spending prime sleeping time between 12 am, and 3 am browsing through our friends’ Instagram posts keep us awake, and at the end of the day, we wake up tired in the morning.

Consequently, this sense of urgency and curiosity further intensifies our addiction to social media. However, on the other hand, it can be proven that due to social media, we can communicate with each other much faster and more efficiently. For instance, for something that is not urgent, we can send a text message instead of having to carry a physical mail or using a telephone to call. The time that was spent going to the post office can now be spent connecting with more people and expanding our social media networks.

The pros and cons of social media can be debated endlessly, but the fact of the matter is that there is a “difference between obtaining information from the Internet and gaining actual knowledge-or being able to apply the information in a particular context.” Moore further argues that social media sites and emerging technology “should not be a substitute for real human interactions.”

Financially, social media obsessions are losing businesses and people billions of dollars (in the order of workers reviewing social media sites rather than working and individuals flashing away innumerable hours which could be rightly invested in efforts with more substantial payoffs). Also, there are cultural costs linked with skipping exceptional responsibilities to family, friends, and loved ones. It’s solely a question of the time until the definition of addictions is extended to show that the usual standard and unfavorable addicts are unfortunately addicted to security, power, recognition, endorsement, attention, admiration, status, and wealth (that trigger the corresponding dopamine freaks trigger with heroin, smokers trigger with nicotine, food addicts trigger with junk foods, and social media addicts trigger with likes, upvotes, followers, and selfies) . All human-made problems can be traced to the money, power, and status addicts who control the institutions that define addictions. There is just one obsession, and it’s to the neurotransmitter dopamine.

This is why all addicts share the same symptoms — self-deceptions, denial, an inability to admit to addictions, an uncompromising commitment to continue indulging in their favorite dopamine triggering behaviors, and an indifference to the damage caused by their need to feed insatiable cravings. Nowadays, everyone is addicted to smartphones and social media, even the kids. Similar to smoking, smartphone, and social media, obsession is an inclination that is difficult to drop. It may be a long journey to gain digital wellness, but a long walk usually starts with the initial step. In this case, the purpose of getting rid of mobile phone fixation is to realize that you have an intricacy and that you are ready to work on it.

According to Melissa Leiter (2014), people have the most active presence in different platforms: First, Facebook; it is a website that enables enrolled users to devise profiles, upload photos, and video, transmit information, and keep in touch with colleagues, family, and colleagues. Second, YouTube allows users to upload, look, rate, share, add to preferences, report, commentary on videos, and support to other users. It extends a wide assortment of user-generated and corporate communications videos. Third; Instagram, an online photo-sharing application and social network platform that empowers users to update and upload clips and short videos through a mobile app. Fourth, Pinterest wherever we get to be invigorated and get opinions, be it for fashion, for cuisine, for study, or messages of intelligence for day-to-day life.
Fifth; Snapchat centered on private, person-to-person pic sharing, you can instantly use it for a variety of different tasks, including posting brief videos, live video conversing, messaging, creating caricature-like Bitmoji avatars, and sharing photos and videos. Sixth, LinkedIn is typically where people go to look for jobs and connect with other business professionals. Lastly, Twitter and Whatsapp; people use them to communicate with their immediate social network. They’re typically a place where people go for niche content that interests them. Today, young generations grow up having significant contact with different kinds of social media. There exists a relation between social media and their impact on the youth’s change in behavior. 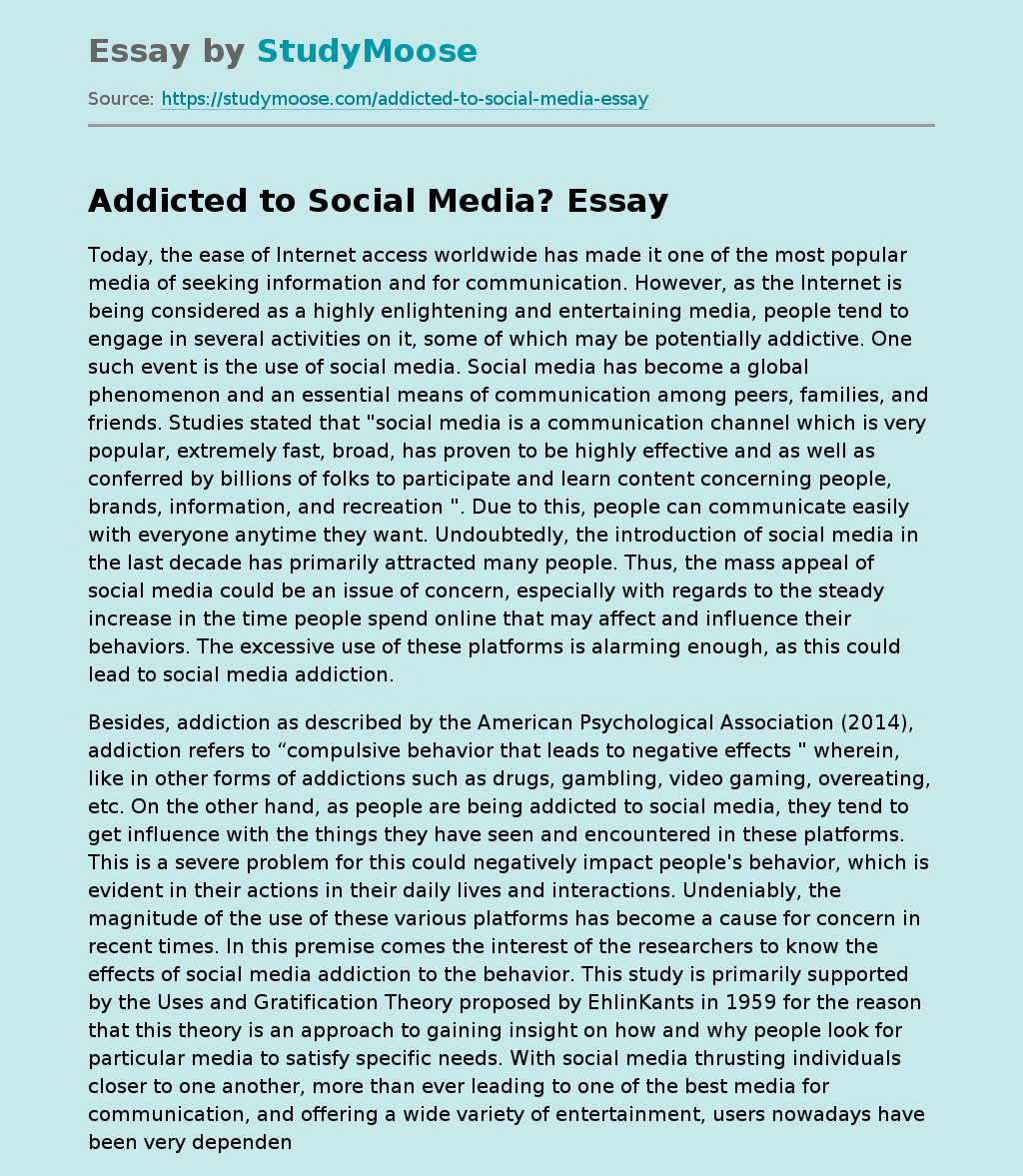