Acts of Bravery in To Kill a Mockingbird

Fearless The quality of mind or spirit that enables a person to face difficulty, danger or pain. This is the definition of courage. People often demonstrate courage both mentally and physically. Back in the 1930’s people commonly displayed this either by going against the beliefs of racism, or simply overcoming personal fears. These events of bravery happen throughout Harper Lee’s fictional novel, To Kill a Mockingbird.

It takes courage for Atticus Finch to defend an African American man in front of a jury who is against him.

Don't use plagiarized sources. Get your custom essay on
“ Acts of Bravery in To Kill a Mockingbird ”
Get custom paper
NEW! smart matching with writer

In this time most people are racist towards all the African Americans. Therefore by Atticus defending the African American, Tom Robinson, his life changes along with his children’s, Jem and Scout; “You can just take that back, boy! This order, given by me to Cecil Jacobs, was the beginning of a rather thin time for Jem and me.” (Lee 99.) Scout and Jem have to be brave and not let these rude remarks get to them.

Even though the town was against Atticus, he still defends Tom fairly; “Atticus was trying to show, it seemed to me, that Mr. Ewell could have beaten up Mayella.”(Lee 238.)

Atticus is fearless and does what he thinks is right no matter how much it might affect him and his family. Calpurnia also displays courage when she takes Jem and Scout, two white children, to her African American church; “You ain’t got no business bringin’ white chillun here-they got their church, we got our’n.” (Lee 158.

) Calpurnia gets insulted when she brings them there. Yet Calpurnia stands up for herself and the children and does not back down and leave;”It’s the same God, ain’t it?” (Lee 158.) Like Atticus, Calpurnia will do what she thinks is right, no matter what. In addition, Boo Radley expresses courage when he has to go outside of his house to help Scout and Jem after 25 years of staying indoors.

The children had developed a fear of Boo Radley based on old rumors and the fact that he never goes outside. They would never have thought that Boo would be brave and save them in a fight; “Suddenly he was jerked backwards and flung to the ground almost carrying me with him” (Lee 351.) The children were lucky that Boo had been fearless and attacked the man that was hurting them. He has tried to commucate with them before but this time he made a great impact, “He gave us two soap dolls, a broken watch and chain, a pair of good-luck pennies, and our lives.” (Lee 373)

At the beginning of the story Boo Radley is considered a monster, but at the end we know him as a hero. The bravery throughout this novel will continue to amaze readers everywhere. People now can get a chance to understand how courage endures in the face of racism. To Kill a Mockingbird will always be a beloved classic story throughout future generations.

Acts of Bravery in To Kill a Mockingbird. (2021, Dec 13). Retrieved from https://studymoose.com/acts-of-bravery-in-to-kill-a-mockingbird-essay?post 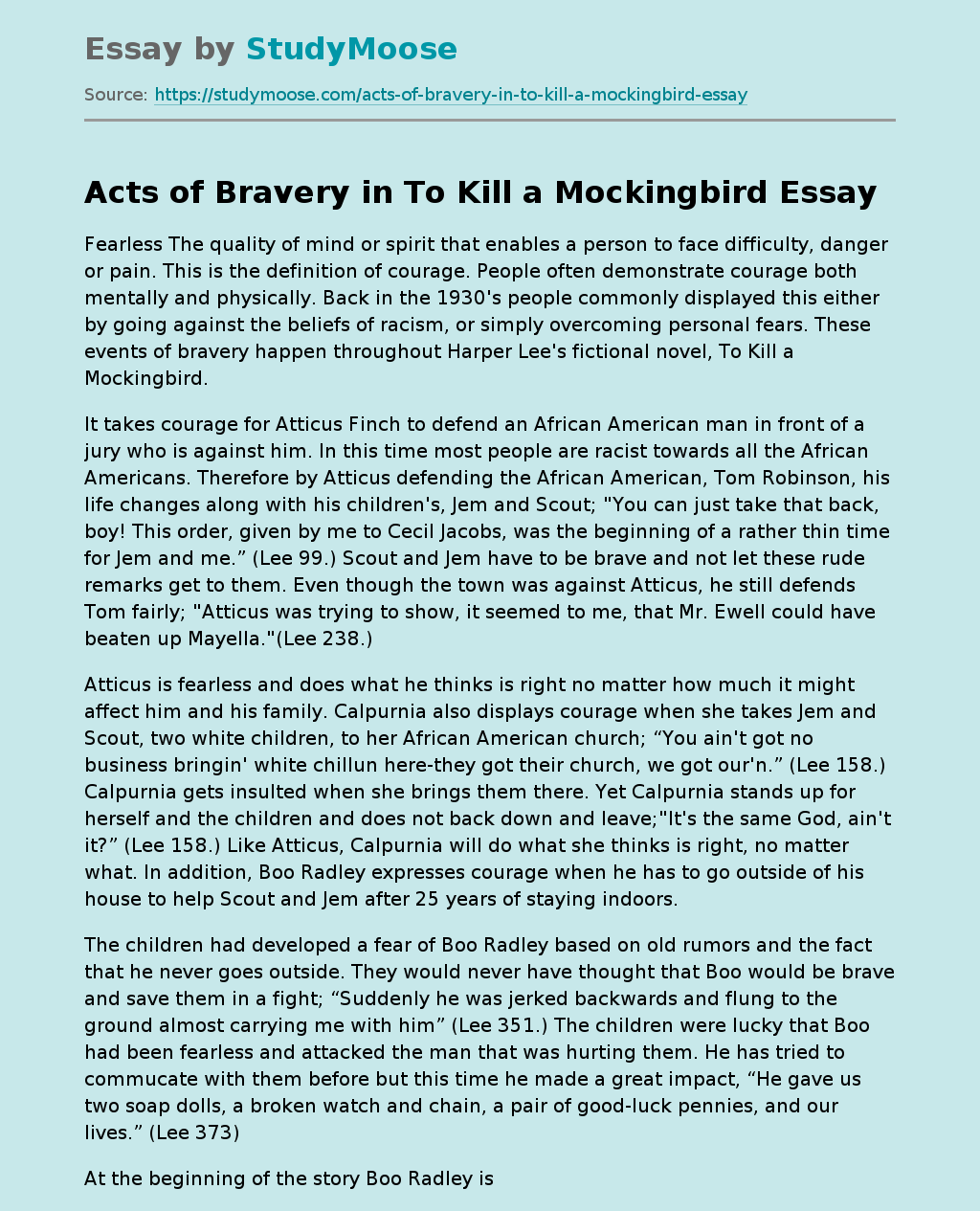