Morality refers to moral duties and ideal human character and rules society to promote ethical and virtuous behavior. (Young & Koopsen, 2005). Values have emotional and spiritual power in the motivation of choices (Young &Koopsen, 2005). Ethics is the practice of morality and values in society which may find conflict in certain religions, philosophies, and state laws (Young & Koopsen, 2005). The choice of euthanasia is based on an individual’s religious belief or guiding principle, culture and tradition, the ability to make competent choices, and impacted by state and federal laws.

Don't use plagiarized sources. Get your custom essay on
“ Active Voluntary Euthanasia ”
Get custom paper
NEW! smart matching with writer

This paper explores the concept of euthanasia, the various religious and ethical views, case studies, and state laws that protect individual rights. First, this paper will explore the history, the present concept of euthanasia, and discuss a past medical case. What is Euthanasia? History reveals that the choice of euthanasia has been a topic of great debate. Ancient Greeks felt that sick people were expendable. Plato supported euthanasia for deformed and sick infants to relieve the burden of society (Boss,2010), Boss adds that the Stoics believed that when an individual can no longer be useful in society, death was a noble act.

Additionally, Boss adds that Aristotle opposed euthanasia and believed that individuals should face death with courage. The Pythagoreans, writers of the Hippocratic oath opposed euthanasia in the belief that humans were possessions of the gods. The Hippocratic oath taken by medical professionals reads: Never will I give a deadly drug, not even if I am asked for one, nor will I give any advice tending in that direction.

Theologian, Thomas Aquinas, merged the beliefs of Aristotle and Biblical readings and argued that euthanasia and suicide are both unnatural and immoral (Boss,2010).

Others such as Immanuel Kant opposed the choice of euthanasia. He believed that the choice for euthanasia showed a lack of respect for humanity (Boss,2010). Thomas Jefferson stated, “The care of human life and happiness and not their destruction is the first and only legitimate object of good government. ” Historically, the issue of taking a life was considered immoral and oppositional to both God and government. The controversial debate over the choice of euthanasia has continued through history leading to the present day.

Euthanasia can be defined as a painless death of an individual inflicted with a terminal, incurable disease (Boss,2010). In Greek, the word euthanasia means ‘good death,’ however many people would question that definition. Euthanasia can be passive, active, voluntary, or involuntary according to Boss. Today, American law prevents active euthanasia, or physician-assisted suicide, which involves giving an incompetent person a lethal drug, or administering a lethal drug with the patient’s permission to die (Boss,2010).

One example in America involving the debate about euthanasia is found in the statement by Boss (2010), who stated that 75 percent of Americans supported legal euthanasia before the 2005 Terry Schiavo case. Terry suffered irreversible brain damage and her husband requested the removal of life support including food and water. Terry’s parents requested the feeding tube be replaced with a court order. This case touched the hearts of many in America as they struggled to understand the ethics of euthanasia and life and death issues.

For some individuals, there is no difference between killing and allowing-to-die. Other countries outside America make no difference between passive and active euthanasia. For example, active voluntary euthanasia is legal in France and in the Netherlands (Boss,2010). The choice of euthanasia relies on an individual’s morality, values, and ethics. These choices may be based on an individual’s religious preference and create conflict with state laws. .End of life issues also consist of psychological, social, and spiritual dimensions according to Young and Koopsen (2005).

Religious Views about Euthanasia Death is a unique experience for each individual (Young &Koopsen,2005). When an individual is faced with death, they confront their personal beliefs and often find challenges with end of life decisions. According to Young and Koopsen, dying is a process of spiritual transformation and a time to turn inward to find peace and comfort in spiritual fulfillment. Medical professionals learn to respect the patient’s religious and philosophical views regarding death and they create healthcare plans to include them.

For example, fundamental Christians find comfort in prayer and Bible readings, and some of them oppose any form of euthanasia. Nonreligious, atheists, and agnostics have a guiding principle that offers them support. For many individuals death is not an end of life reality. Various religions have views that life continues after death. This continued life after death is often called heaven, the spiritual world, another place of existence, or nirvana (Young & Koopsen,2005). America is the most religiously diverse nation on earth and this diversity is a challenge to the political arena.

The most common religions in America are Buddhism, Hinduism, Islam, Judaism, and Christianity. According to Young and Koopsen, religious cultures are the most powerful factors that modify the individual’s attitudes toward life, death, happiness, and suffering. Whatever leads an individual to a peaceful death gives expression to a personal spiritual, religious, and philosophical view in practice. There is another view of suffering and pain, according to some religious, that has an impact on their choice of euthanasia. Some religions view that pain and suffering as deriving from sin (Conwill,1986).

Conwill gives the following examples: a woman who states she will improve in health once she can forgive someone; another woman believed the beatings from her husband were punishment for marrying early in life, and a man stated that he refused treatment because the world would end someday. These examples from Conwill show that the diverse religious interpretation of pain and suffering may interfere with end of life decisions like euthanasia. Court Laws Religious and political views have had an impact on court laws. Court laws differ in various states in America and in different countries.

In 1976, the California Natural Death Act, the first law in the United States to address the choices of incompetent individuals, gave terminal patients the freedom to decide end of life treatment (Boss,2010). A 2005 Pew Research found that only 29 percent of Americans have a living will (Boss,2010). In the 1990 Cruzan vs. Director, Missouri Department of Health, the U. S. Supreme Court left it up to the states to decide for incompetent persons (Boss,2010). In 1994 and 2010, the Oregon Death with Dignity Act legalized euthanasia under certain conditions (Boss,2010).

The Act allows terminally ill adults to obtain and use prescriptions of lethal medications. Of the 96 patients for whom prescriptions were written during 2010, 59 died from ingesting the medications, and some of the patients lived after taking the medications (Oregon,2010). In 2002, John Ashcroft argued that giving patients illegal drugs to induce death is illegal under the Controlled Substances Act. Today, Oregon, Washington, and Montana have legalized physician-assisted suicide, as well as the countries of Netherlands, Switzerland, Luxembourg, Thailand, and Belgium (Boss,2010).

One report, dated April 22, 2001, quotes the view of some of the elderly living in the Netherlands: “Elderly people in the Netherlands are so fearful of being killed by doctors that they carry cards saying they do not want euthanasia, according to a campaigner who says allowing assisted suicide in Britain would put the vulnerable at risk (Boss,2010). ” There are various organizations and agencies that influence the making of laws that deal with issues like euthanasia. An organization that supports ‘death with dignity’ is the Death With Dignity National Center that has been the leading advocate (Death With Dignity website).

A pro-life agency opposed to euthanasia is The International Task Force on Euthanasia and Assisted Suicide, now called the Patients Rights Council (The International Task Force). This agency opposes public influence that euthanasia is a negative choice and shows the film “Dr. Death” to 14 year-old students. The Patients Right Council also educates the public about the difference between the Living Will and the Durable Power of Attorney for Health Care. There are different views and laws about euthanasia in various countries. Physician-Assisted Suicide

Although active euthanasia is not legalized in America, many individuals argue for ‘death with dignity’. Some Americans support the ideology of a physician-assisted death as a legal lawful act (Boss,2010). One example of a physician who assisted terminally ill patients to die is Dr. Jack Kevorkian. He has helped over a hundred individuals to escape suffering and pain by a drug given death. In 1999, a Michigan judge sent Dr. Kevorkian to prison for second-degree murder, but he was released on parole in 2007. The public gave him nicknames such as ‘Dr. Death’ and ‘Serial Killer’.

Another argument against physician-assisted suicide is that Dr. Kevorkian had little knowledge of his patients as other family physicians. Kevorkian identifies himself as a defender of liberty. According to Boss (2010), Margaret Battin suggested that the physician must know the patient’s view of suffering and death and to respect the patient’s liberty. Battin believes that the physician should not be the one to make the choice of death for the patient but assist in the patient’s choice of treatment. Another researcher, J. Gay Williams (Boss,2010), believes that euthanasia is a wrongful death—a killing.

He is against legalizing voluntary euthanasia that may lead down the slippery slope to accept involuntary euthanasia. John Hardwig, professor of philosophy and medical ethics, argues that when an individual burdens society with costly medical care to maintain life, the individual has a duty to die (Boss,2010). Conclusion Medical ethics is concerned with the differences between active and passive euthanasia (Boss,2010). Boss adds that this idea was adopted in the 1973 America Medical Association statement. Taking the life of a patient in a direct way is not permissible for most medical professionals and public citizens.

Still, there have been many arguments for euthanasia. For example, the argument to prolong extreme pain and suffering can be resolved by a quick lethal drug administered to the patient. Moral decisions for euthanasia involve the differences between killing someone and letting someone die. Other ‘mercy killings’ are claimed to derive from compassion toward a loved one. Dr, Kevorkian believes he is a defender of liberty by assisting terminal patients to die. Margaret Battin (Boss,2010), believes opposition to euthanasia is based on moral values of mercy, justice and autonomy.

Other academic researchers present their views on active and passive euthanasia. Case studies are presented in many arguments to encourage individuals and medical professionals to critically think about the choice for euthanasia. Court laws regarding euthanasia vary from country to country. The conclusion of this research reveals that the decision for or against euthanasia is primarily based on a personal religious view, a guiding principle, or culture and tradition, the ability to make competent choices, and determined by state and federal laws. 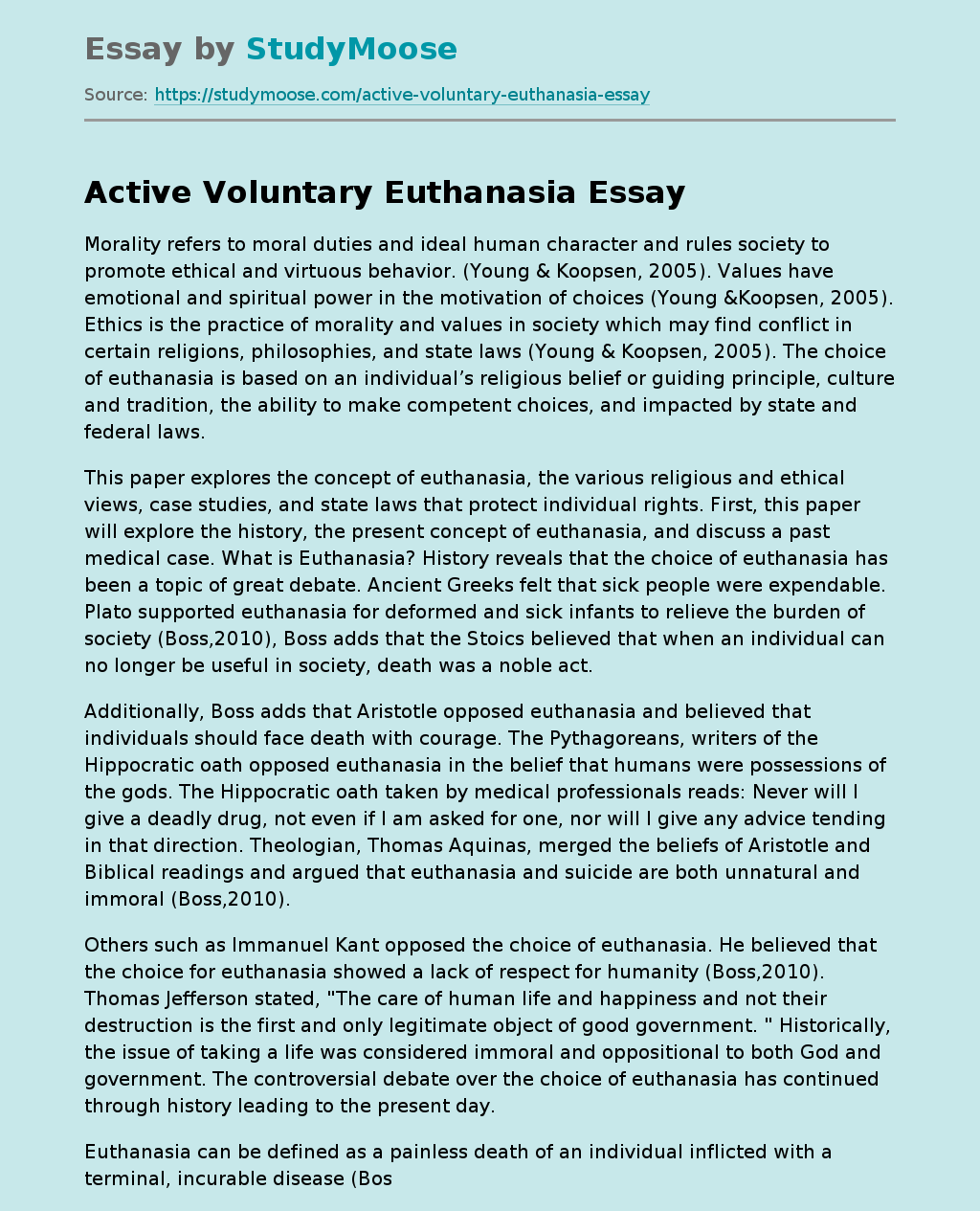