Why do Sampson and Gregory fight with Montague’s men?
They stir up old woes again that occurred in the past and fight.
Benvolio and Tybalt come upon the serants fighting. Contrast their reactions to the fight.
Benvolio does not want to fight, but Tybalt fights and is angry.
When Montague and Capulet enter and see the disturbance, they want to fight, too. What do their wives say?
The wives tell them to not fight at all, and that they are getting old.
Don't use plagiarized sources. Get your custom essay on
“ Act 1 Romeo And Juliet Questions and Answers ”
Get custom paper
NEW! smart matching with writer
What ended the opening skirmish?
The prince threatens Capulets and Montague’s death if argument starts again.
Why is Romeo so sad?
He is in love with a woman who does not want to be touched.
In Act 1 Scene 2, Paris asks Capulet for Juliet’s hand in marriage. What is Capulet’s reply?
Capulet tells Paris that Juliet is too young to be married but he will arrange her with other men. If none of those men meet the standards that Paris does, then he will let Paris marry Juliet in a couple of years.
Get quality help now
Dr. Karlyna PhD

+84 relevant experts are online
Hire writer
Why is Capulet giving a feast?
Capulet is giving a feast in order to find who is right for Juliet, along with Paris in consideration.
How does Romeo find out about the feast, and why does he decide to go even though(being a Montague) he is not invited?
The servant, who has the names of the guests, does not know how to read, so he asks Romeo if he knows how to read.
Get to Know The Price Estimate For Your Paper
Topic
Number of pages
Email Invalid email

Romeo soon finds out about the feast that the Capulet, the servants master, is having. Romeo decides to go, because he knows that Rosaline, the woman he loved at the time, would be there. Also, Benvolio wanted to show Romeo the many other women there would be at the party so that he can forget about Rosaline.

Describe Juliet’s relationship with her family in Act 1.
Juliet seems to have a very good relationship with her family, especially with her father. They are both very close, so when she was told that Paris wanted to marry her, she was willing to, only because of how much respect she had for her father.
At the end of Act 1, Scene 4, what does Romeo tell Benvolio,, foreshadowing future action in the play?
Romeo tells Benvolio that he will go to the feast, but that he feels that problems will occur at the feast because of him being a Montague, not a Capulet.
What does Romeo mean when he says, ‘Oh Dear Account! My life is my woes debt”?
When Romeo says, “Oh dear account! My life is my foe’s debt,” he is saying that him marrying Juliet would be the wrong thing to do, and if he married her, then that decision of his would affect him immediately after the marriage up to his whole life. Also, him knowing that he has fallen for a Capulet is very shocking, because Capulets are Montague’s enemies.
Curtis Sandoval
Share 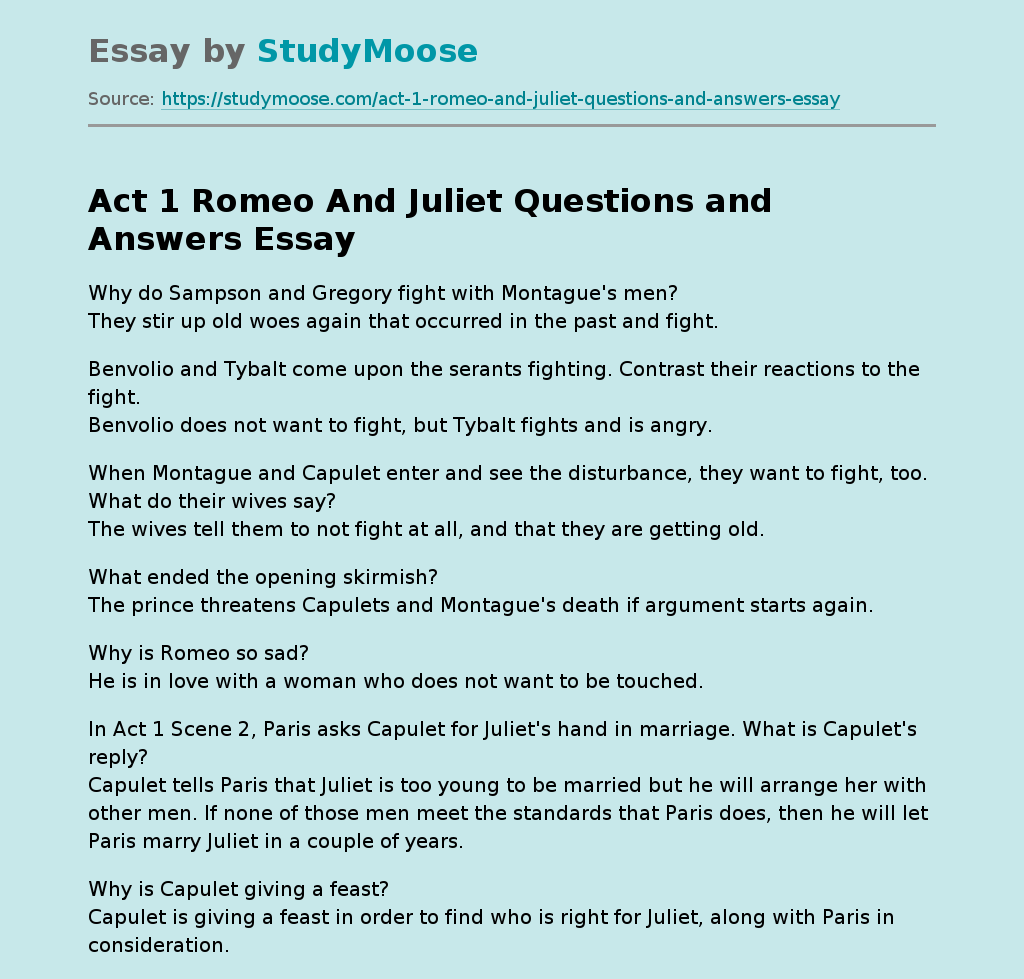