In the year 1992, the Southern Company that held the Bowen plant, a coal-fired steam electric plant had to decide on the various options available to comply with the amendments in the Clean Air Act, effective 1995. The Bowen plant was an unusually large plant with a capacity to serve the residential, commercial and industrial demands of 1 million people. The Bowen generators consumed 8.338 million tons of coal and generated 21,551 million kilowatt-hours of electricity.

Don't use plagiarized sources. Get your custom essay on
“ Acid Rain: the Southern Company (a) Case Analysis ”
Get custom paper
NEW! smart matching with writer

During 1990, Bowen plant emitted over 30 tons of sulfur dioxide per hour, an important precursor of acid rain. In 1990, Congress passes the Clean Air Act that aimed at controlling acid rain. As per the Clean Air Act, beginning 1995 (Phase 1) all the coal-fired utility plants would be receiving allowances to emit 2.5 pounds of sulfur dioxide per million British Thermal Units (MMBtu) of coal consumed.

In the year 2000 (Phase 2), all coal-fired utility plants, would get allowances worth 1.2 pounds per MMBtu of coal.

The plants either had to reduce their emissions or purchase additional allowances from other firms. The Bowen plant received allowances for 254,580 tons of sulfur dioxide for each if the five years, from 1995 till 1999. From year 2000, it would receive allowances worth 122,198 tons per year. To comply with this new law, Southern Company had the following options: * Burn high sulfur Kentucky coal without scrubbing the exhaust gases, as in past, and buy the allowances from other firms. * Install scrubbers to remove sulfur dioxide from the exhaust gases of the generators.

There were further two options available to be considered * Scrubbers could be installed from 1992 to 1994, to be ready for Phase one. * Install scrubbers from 1997-1999 and be ready for Phase 2. * Switch to low-sulfur coal from Kentucky or West Virginia. The emissions would be lower than the amount permitted in Phase One, but in Phase Two they would have to buy allowances. As a result of the analyses, Option 3 : burning low-sulfur coal seem to be the best fit in this situation, because it has the minimum cost involved and thereby, generates the maximum profits for the company.

The case presents three main options which were analyzed to make an informed decision about the choice to be made. I have calculated the net present value of the costs involved in each of the three methods and recommend the option one with minimum net present value of cost to be used for complying with the Clean Air Act amendment. The three available options are:

* Burn high sulfur Kentucky coal without scrubbing the exhaust gases, as in past, and buy the allowances from other firms. * Install scrubbers to remove sulfur dioxide from the exhaust gases of the generators. There were further two options available to be considered * Scrubbers could be installed from 1992 to 1994, to be ready for Phase one. The Bowen plant would then be generating lower sulfur dioxide emissions that could be sold to other firms

* Install scrubbers from 1997-1999 and be ready for Phase 2. In this, they will be generating excess of allowed emission level in Phase 1 (1995-1999) and would have to buy those allowances. Starting Phase 2 (year 2000), they would be in a state to sell the allowances. * Switch to low-sulfur coal from Kentucky or West Virginia. The emissions would be lower than the amount permitted in Phase One, but in Phase Two they would have to buy allowances.

To calculate the total costs involved for each of the three options, I have considered only those factors that are not common in all. I have calculated only the excess of cost that might be required to deploy an option. The current operating costs and all costs that do not change amongst the options have been left out as these costs would remain same and will have no effect on the decision.

The data used to perform analysis has been taken from the case study only. The factors available are: * Switching cost of coal: switching from high sulfur to low sulfur. * Costs or revenue involved with buying or selling, respectively, the sulfur dioxide emission allowances. * Depreciation on capital costs

To determine the costs involved in the given three options, following assumptions have been made: * There is no available evidence that the cost of coal may deviate from the given amounts, or the company seems to have contracts with the coal vendors and so the values are constant. * The electricity generated by the plant remains constant throughout the operation of the plant, that is, amount of electricity generated is 21,551 million kilowatt hours every year.

* The amount of coal required to generate the electricity amount remains fixed to 8.338 million tons when high-sulfur coal is used and 8.391 million when low-sulfur coal is used. * In 1990, the revenue generated by electricity is $5.6 cents per kilowatt hour on an average, and will more or less the same. * The rate of buying or selling allowances is estimated to be $250 in year 1995 and will increase at a rate of 10% every year till 2010. After 2010, the rates will remain constant. * As per the amendments in the Clean Air Act, in Phase One, Bowen plant will be allowed to emit 254580 tons of sulfur dioxide and in Phase Two, 122198 tons of sulfur dioxide. * There are firms ready to sell or buy the allowances for sulfur dioxide emissions.

Option 1: Burning High-Sulfur Coal without Scrubbers; Purchase Allowances In this option, we consider using the existing infrastructure. Since, the companies are allowed to buy extra emissions from some other firms, we will consider that. The information that is available to analyze is:

* Cost of coal from 1992-1995 is $41.46 per ton and is expected to fall down to $29.82 per ton from 1996. * The amount of sulfur dioxide emitted is 266550 tons for burning 8.338 million of high-sulfur coal. * The first and only cost in this method will be the cost to buy emission allowances for sulfur dioxide from other firms. The costs will vary every year because of the difference in allowance prices as shown in Exhibit “Option1”

After, adding the tax benefits to the total cost, the net present value of cost in this method is $266,379,610. The advantages of using this approach are that there will be no costs to add or upgrade machinery. Also, since the plant will be operating as it currently is, there are least chances of unexpected malfunctioning of the plant. The issue with this approach is that we are assuming that there are firms willing to sell their allowances.

But, since it is known that the Bowen plant is comparatively cleaner than the other coal-fired steam electric plant, finding the firms willing to sell involves risk. And in-case, if we are not able to find firms ready to sell allowances, it will put the plant into a risk of shutting the operations and pay fines, or decrease the amount of electricity generation to emit the allowed sulfur dioxide levels. Also, it is a greater threat to the environment to emit such large numbers of sulfur dioxide when there are methods available to decrease those numbers.

Option 2: Burning High-Sulfur Coal with Scrubbers; Sell Allowances In this option, we consider adding scrubbers to the plant. Scrubbers will help reduce the amount of sulfur dioxide emissions by 90%. In this option, the plant will be able to sell allowances as very low amounts of sulfur dioxide will be emitted by the plant. The information that is available to analyze this option is: * Cost of coal from 1992-1995 is $41.46 per ton and is expected to fall down to $29.82 per ton from 1996. * The amount of sulfur dioxide emitted is 26655 tons for burning 8.338 million of high-sulfur coal, once the scrubbers are installed * The first cost in this method will be the cost of installing scrubbers. The scrubbers are highly expensive and so can be considered to be installed and ready to use either by the beginning of Phase 1 (year 1995) or by the starting of Phase 2 (year 2000).

The advantages of using this approach are that there is a very low emission level of sulfur dioxide, and we can earn revenue by selling allowances. Also, we are sure that there will be firms ready to buy those allowances. This option also is beneficial for the environment. The issue with this approach is that we are the net present value of the cost is high. Also, we will be investing atleast $293,959,184 in the plant which we are sure will be operational for only a few more years, till 2016. With the advancement in technology, there are higher chances of new more efficient plants to come on stream even earlier.

In this option, we consider changing the type of coal that is burnt in the plant. We can switch to low sulfur coal which contains 1% sulfur by weight and so will reduce the emission of sulfur dioxide in the environment. The information that is available to analyze this option is: * Cost of low- sulfur coal from 1996 is $30.37 per ton and is expected to rise to $34.92 per ton from 2000. In years 1992-1995, coal used in the plant will be high-sulfur coal which has the cost of $41.46 per ton * The amount of sulfur dioxide emitted is 16750 tons for burning 8.391 million of low-sulfur coal starting 1996 and so we would have to buy emission allowances for the years 1995, 2000-2016 and we will generate revenue in years 1996-1999 by selling the excess of emission allowance.

After adding the benefits of tax deductible expenses and depreciation values, the net present value of cost in this option is $176,919,328 (as shown in Exhibit “Option3”). The advantages of using this approach are that the net present value of the costs is the lowest and so is most beneficial for the Southern Company. There is relatively lower emission level of sulfur dioxide. Although we have to buy allowances in most of the years, still the lower levels are better for the environment. The issue with this approach is that we are the investing a $22.1 million in the plant and we are depending on the new type of coal whose cost is expected to rise over the years.

After analyzing all the three available options, I would conclude that the best option to be deployed is Option 3: Burn low-sulfur coal. This option does not only have the least cost but is also beneficial for the environment. The option will generate higher profits for the company and we can have even a lower cost, if the price of the low sulfur coal does not rise and is negotiable. Also, there can be a possibility that the changes in the electricity precipitator for low-sulfur coal could decrease the emission levels. The major concern with this option is that we have to either find firms willing to sell their allowances (although a small amount) or would have to decrease the amount of electricity generated to adjust the sulfur dioxide emissions which will impact the revenues but since the amounts are low, the revenues will not be affected adversely. 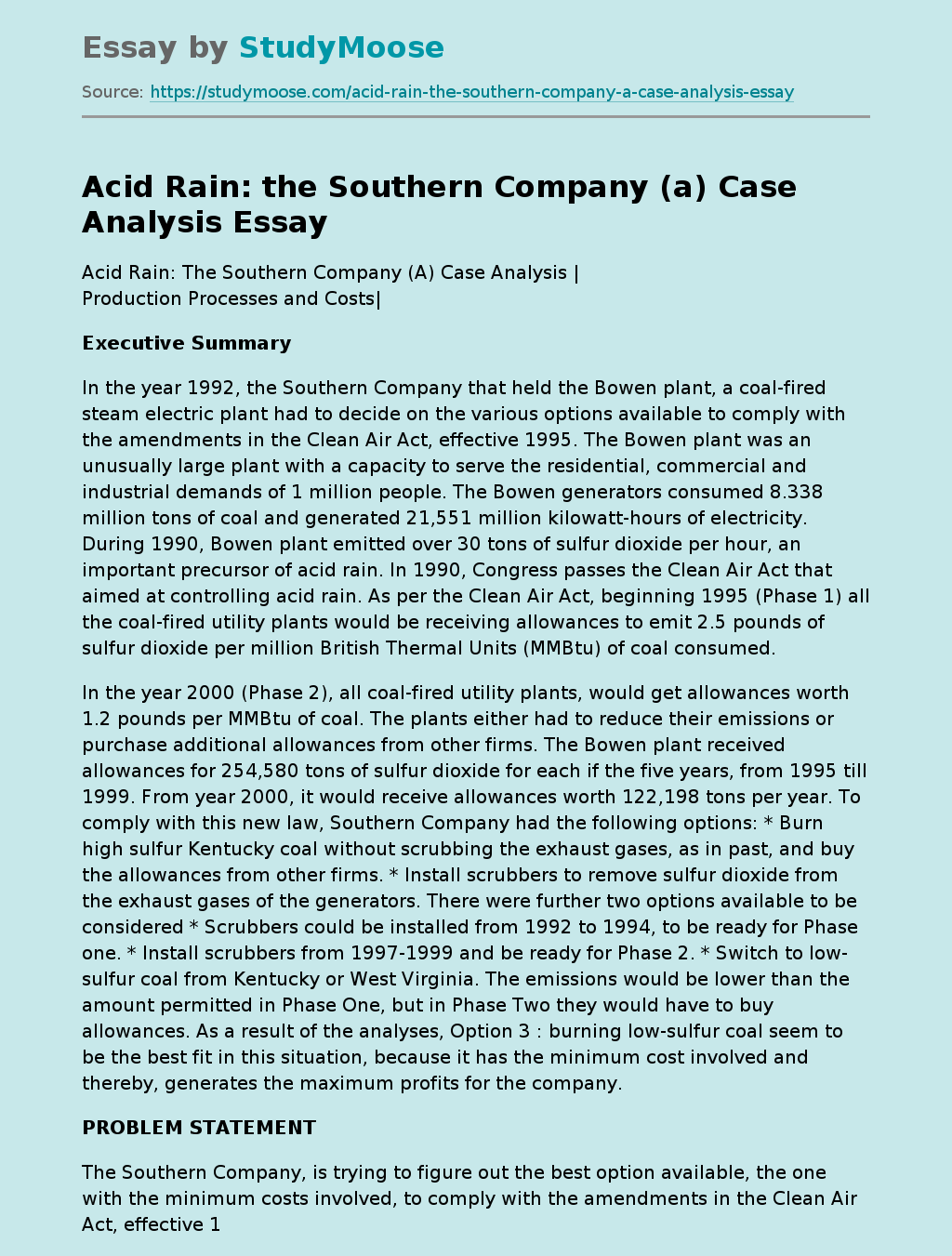