Increased globalization in the business world has brought to fore some of the issues and challenges that multinational businesses face in financial recording and reporting of foreign based operations. With operations based in different countries that operate under different accounting principles and with varying currencies, there has been a need for the accounting principles and standards to be converged.

This has in the past nine years seen the accounting policy making suggesting a complete overhaul in the way financial statements are reported and a convergence between the US’s generally accepted accounting principles (US GAAP) and the International Financial Reporting Standards (IFRS).

Don't use plagiarized sources. Get your custom essay on
“ Accounting Standards Boards ”
Get custom paper
NEW! smart matching with writer

This has been through various meetings between the International Accounting Standards Board (IASB) and US Financial Accounting Standards Board (FASB), two boards which determine these accounting standards. This paper therefore evaluates the history of the two boards and their relationship and looks at IASB equivalents to FASB original pronouncements. It also describes how a Master of Science in Accounting would prepare a student for an accounting profession.

History of the Relationship between FASB and IASB

They both put a lot of emphasis on income statements, balance sheet, statements of changes in equity and cash flow statements as key reports that are important in financial reporting. Over the past decade these two boards which determine the accounting standards in the world have been working towards ensuring that the financial reporting all over the world converges. The convergence concept first took root in the 1950s in response to the cross border capital inflows that were as a result of the economic integration after world war two. These efforts initially focused on reducing difference in accounting principles between major capital markets globally otherwise referred to as harmonization of the accounting principles. By 1990s the concept had changed into convergence which sought to build high quality financial reporting standards to be applied internationally (Financial Accounting Standards Board, 2012a).

Both developed in the 1970s, FASB and IASC (international Accounting Standards Committee) a predecessor to IASB, set a trend for expanding international accounting standards and with the reorganization of IASC into IASB in 2001, the use of IFRS among various countries has progressed rapidly. For instance, over 100 countries and the European Union use these standards issued by IASB. The U.S. mainly uses its own issued US GAAP (Progress Report, 2011; Cain, 2008). IASB and FASB have been working together towards converging the IFRS and the US GAAP since 2002.

Even China and Japan have been working to bring together their accounting standards with IFRS as at 2009. Over the past decade the pace of convergence has been very fast with the internationalization of standards growing rapidly. In 2010, Securities and Exchange Commission in the US issues a report supporting the convergence of these standards through incorporation of “the IFRS in the US financial system” (Financial Accounting Standards Board, 2012a). This implies that the US has been increasing exploring adopting IASB’s IFRSs, although there have been issues such as the fair value issues in IFRS and the cost of implementation that have slowed the progress. The IASB equivalents of the FASB original pronouncements

As noted above, IASB’s IFRS takes a principle based approach to accounting standard setting as compared to FASB’s pronouncements which are viewed to be much stricter. In essence therefore, though IASB and FASB may address similar accounting concepts their approach to it may be different. It is these IASB’s equivalents to FASB’s pronouncements that bring the differences between GAAP and IFRS standards. Evaluating the FASB’s original pronouncements and IASB, the manner in which accounting concepts are approached can be noted.

These are: whereas IASB’s IFRS requires that inventory costs of spoilage and idle capacity be excluded from the cost of inventory, FASB’s GAAP does not; IFRS requires yearly comparison of financial statements unlike US GAAP which only views comparisons as
“desirable” but require three year comparisons; IFRS permits but does not require reporting of “comprehensive income” unlike US GAAP which requires it; IFRS classifies liabilities as non-current if refinancing is complete before the date of the balance sheet unlike GAAP which classifies it as so, if refinancing is completed before the financial statements are issued; and prohibition of extraordinary items from the financial reports by IFRS unlike GAAP which permits but to a restricted items which affect profit and loss (Deloitte, 2004; FASB Report, 2002).

Other accounting concepts that differ between IASB and FASB’s original pronouncements are that IFRS requires that LIFO method of determining inventory cost be prohibited in IAS 2, unlike US GAAP which permits LIFO in SFAS 151, and that IFRS requires reversal of inventory write downs if given criteria are met unlike US GAAP which prohibits it. In addition FASB permits that inventory at net value be measured even if it is above cost unlike IFRS which restricts this to producers and broker-dealers inventories. FASB classifies the interest received and paid as operating activity in the cash flow statement unlike IASB which may classify it as financing, investing or operating activity.

This leaves room for a number of interpretations. Furthermore, though FASB excludes overdrafts from cash, IASB includes it if it forms a critical and integral part of an organization’s cash base or cash management (Deloitte, 2004; FASB Report, 2002). Other IASB equivalents to FASB pronouncements are enumerated as shown below (Deloitte, 2004; FASB Report, 2002): -IFRS restates previous financial statements in the event of non-mandated changes in accounting policy, unlike FASB which includes cumulative effects current financial statement’s net loss and profits -IASB uses change in estimated method to evaluate changes in depreciation of assets, unlike FASB which used change in accounting policy that is the net profit or loss cumulative effect. -IASB uses cost recovery method for construction contracts when the completed percentage cannot be determined for sure unlike the USA GAAP which uses completed contract method -IASB does not recognize deferred tax due to the an asset or liability transaction that doesn’t affect accounting or taxable profit and is not a business combination in IAS 12 unlike the US GAAP recognizes this these through its lack of “initial recognition exemption” as addressed in SFAS 109.

-IASB recognizes expense for share-based payment based on fair value of the payment whereas FASB recognizes this based on intrinsic value at grant date -IASB measures business combinations on the date of the acquisition whereas FASB does this on the date of consummation or closing date -IASB requires that recognizing a liability prior to acquisition restructuring be only if the one being acquired recognizes it under IAS 37, this is unlike FASB which recognizes it if the acquisition has already began -IASB recognizes in process R&D as an intangible finite asset or good will, unlike FASB which recognizes it as expense How MSA Program prepares student for professional Accounting A Master of Science in accounting program is very important for anyone who intends to pursue an accounting career in the future.

This program prepares a student by providing knowledge on the various accounting principles that need be applied in accounting profession. It also makes a student be aware of the various accounting standards that are existing in the world, how each differ, and how accounting records and done in each. In addition such a program provides analytical and critical thinking abilities. In addition, it offers a global perspective on accounting practices and business issues and provides a framework for effective development for team building and leadership skills, and ethical decision making in business. Lastly it will enhance interpersonal and communications skills through interactions which seek to learn ways of solving problems and issues in the accounting and finance realm. All these are critical for a career as an accountant. Conclusion

This paper has discussed the history of the FASB and IASB boards and their relationship and has looked at IASB equivalents to FASB original pronouncements. It has shown that standardized management accounting and controlling concepts that transcend national boundaries are increasingly needed with concern on the need of an internationalized Accounting and financial reporting standard to help in comparing of financial statements of countries from different countries and also to make it efficient and less costly for multinational companies when they are conducting financial reporting of their performance. IASB and FASB have made tremendous progress thus fur in their bid to converge the global accounting standards. 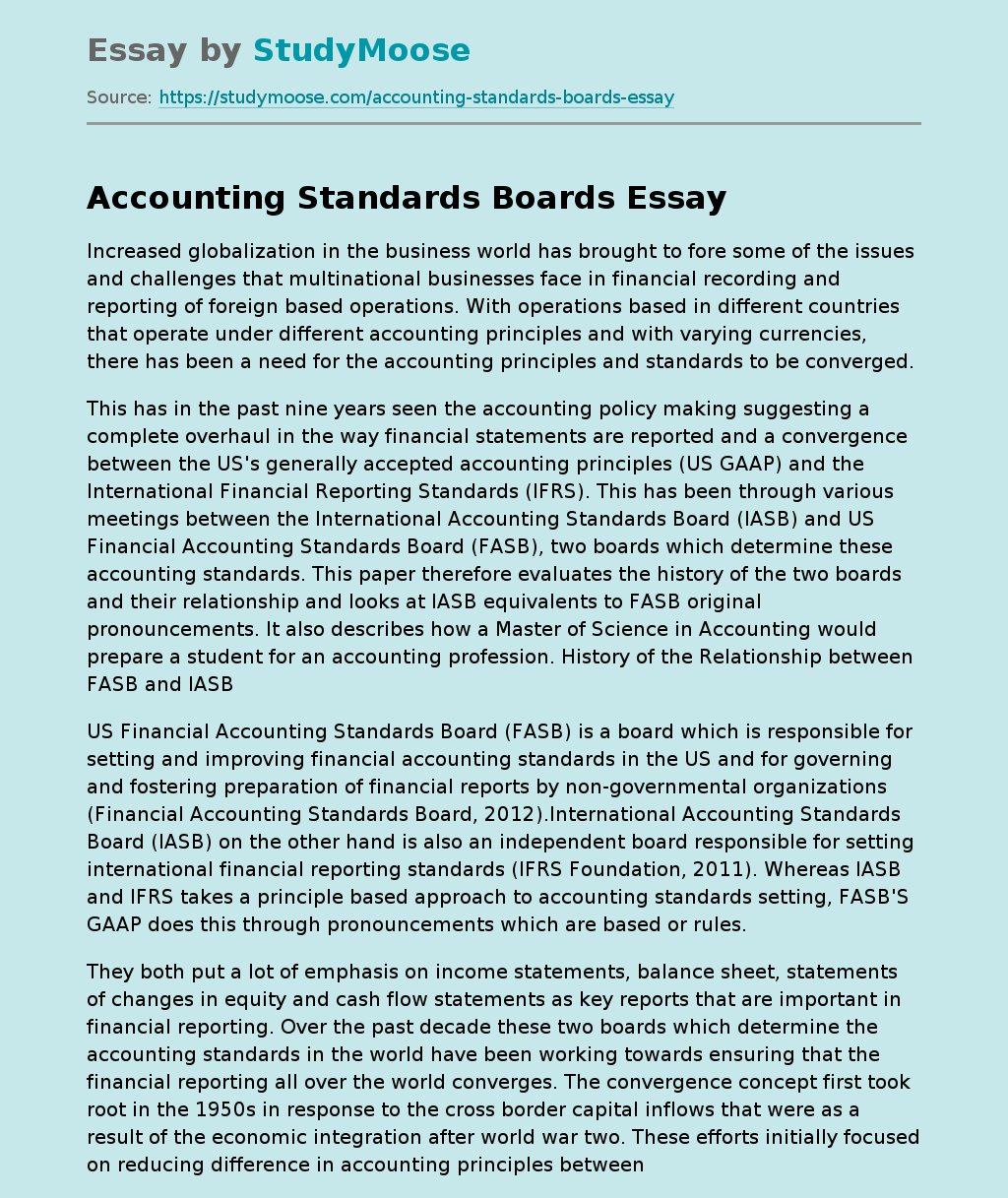