The safety of patients in the health care facilities has of late become a major concern to not only the general public but to the policy makers too in both federal and state levels. This interest has further been activated by the news coverage showing patients who have become victims of severe medical irregularities and also as a result of the 1999 publication by the Institute of Medicine. This report highlighted the various risks patients are exposed to in the health facilities in the US which made the American population to be shocked (Alexander, 2002).

Don't use plagiarized sources. Get your custom essay on
“ Accountability of Nursing Professionals ”
Get custom paper
NEW! smart matching with writer

Prevention of infections related to catheter

The catheterization of the central venous is a main element of intensive management in patient care. Several central venous catheters across the United States of America each year inserted. A considerable percentage of them end up developing sepsis which is related to catheter and this has led to a sharp rise in the mortality rate. Thus the nursing as a profession and in deed all the health care workers should be accountable to such a practice and should be very much involved in the implementation of practices that will reduce the mortality rate among the catheters.

If the nurses are more accountable to their profession and take good care of the catheters, there will be a reduction in infections which are closely related to the catheter arising by intra luminal and extra luminal routes for most of the patients (Silvestri, & Angel, 2005).

As a result of accountability on the part of the nurses the catheter infections which take place in the first week due to the bacteria migration from the skin and ending up on the catheter’s external surface can be highly reduced.

Lack of accountability among the nurses in the United States of America lead to catheter infections after week one has ended. This occurs as a result of handling of locks, hubs and other components of catheter in an improper manner thus causing the intra luminal infection. There is need for such nurses to be held accountable for their actions as such an action arises due to negligence on the part of the nurse, accountability will therefore lead to a decline in mortality rate resulting from catheter infections (Jones, 2007).

When considering infections which are related to catheter there are procedures which are of essence. Such procedures include lack of control trials which are published in a random manner in order to compare the insertion site and the rates of catheter related infections. Suggestions from observational studies indicate that the rate of infection is lower with the approach of subclavian. Another procedure that needs to be observed is the use of ultra sound which has been recommended as a guide while inserting the catheters since they are associated to complication rates of lower magnitude (Irwin, & Rippe, 2007).

The use of antibiotic for impregnated catheters are also recommended procedures since they help in reducing incidences of extra luminal infections and finally is the procedure of skin preparation by antiseptic and also adopting an insertion technique which is strict, these procedures are very important in ensuring that there is a considerable reduction in the rate of contaminations of the extra luminal (Bowden, & Carlos, 2003).

The nurses therefore, have a duty of taking good care of the patients seeking their services in the health facilities of the United States and hence they should be fully accountable of their actions and acts of negligence while handling the catheters or any other patients should not be tolerated at any cost. They should therefore be involved in development of guidelines which are based on new evidence, in order to facilitate catheter related infections reduction (Waldvogel, & Bisno, 2000).

Alexander, M (2002): Guidelines for the Prevention of Intravascular Catheter-Related Infections, Retrieved on 22nd May 2009 from, 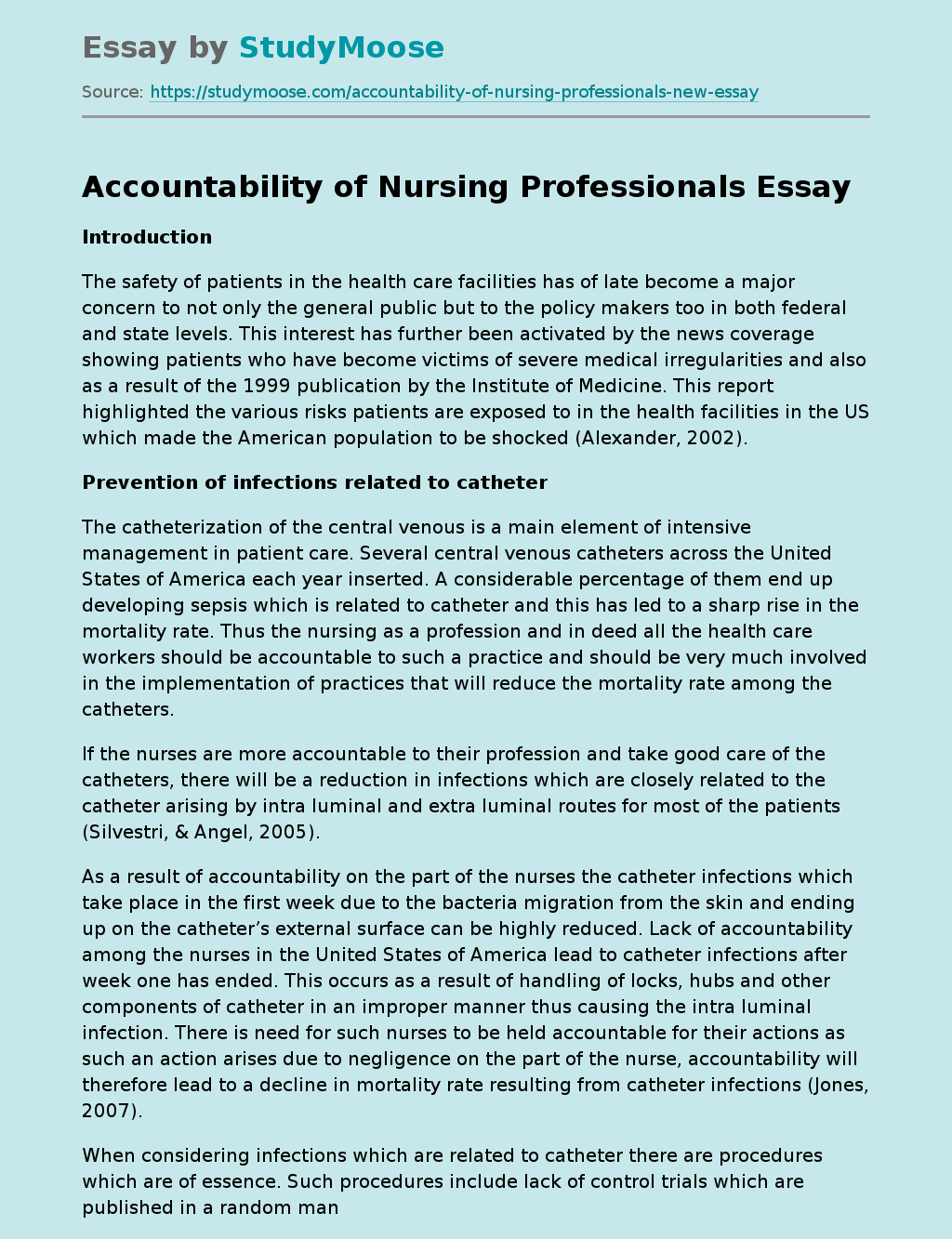