Accolade would definitely be wrong in every aspect of this story. Accolade’s lawyer’s argument that Sega’s security codes were an interface standard is also wrong in a lockean based economy. This is because interface standards are publicly owned by everybody and can be duplicated without permission. Nothing is publicly owned in a Locke based perspective. The utilitarian view would also favor Sega’s software code as being private property, but for different reasons.

This view suggests if Sega didn’t have property rights to its genesis and affiliated profitability, then Sega would lose incentive to create new ideas beneficial to the marketplace.

Don't use plagiarized sources. Get your custom essay on
“ Accolade Video Game Developer vs Sega ”
Get custom paper
NEW! smart matching with writer

This theory of utility also suggests Accolade and Sega should both have taken a different approach to how they did business, or lack of business, with each other. Sega should have granted accessibility to its gaming console for a small fee. This would have made Sega and Accolade more profitable to society because Accolade’s games would benefit Sega’s industry.

The Marxist theory would take Accolade’s side to this story. This theory would suggest the software that Accolade decoded belongs to the general public for their benefit to make a profit. Sega owns only the game console and not the software that is used to run it. Accolade’s lawyer’s argument that the software is an interface standard would stand lawful. I personally agree with the utility theory most because if there wasn’t any incentive for new ideas and technology, then there wouldn’t be any.

People and companies put a lot of effort and resources into new ideas.

A person would not put any time and effort into a good idea, especially if they cannot make any money from it. He or she could not make any money off of their idea because people would just steal their idea and profit from it themselves. If there were no copyrights or patents protecting ideas, we could all be living in an unindustrialized world. I believe Locke’s theory of private property is most appropriate for this case besides the Ninth Circuit Court of Appeals final decision that agreed with Accolade.

Sega was using the lockean approach to private property with its security software. Accolade duplicated their software code without permission and infringed on Sega’s copyright. The story, in the end, basically agreed to Sega’s argument. 2. I believe Accolade Stole Sega’s property because American law has held to the theory that individuals have a right to do what they want with their property, and government has no right to interfere with an individual’s private property even for the good of society.

Accolade would’ve benefited from using Sega’s product, but the law states it is Sega’s property, and they can do what they please with certain legal constraints. Sega did not grant Accolade a license to market games on their property. If Sega did grant them a license, then it would not be stealing. If I did not grant a person permission to use my car for their benefit and they drove off with it, I would call the police because someone stole my car. 3.

I believe Accolade went too far in trying to reverse engineer Sega’s source code because Accolade already knew Sega didn’t want them marketing games on their new gaming console. If Sega wanted Accolade games on their console platform, wouldn’t Sega license them to do so? Sega specifically made that security code so game companies like Accolade would not benefit from Sega’s property. Sega wanted to be the sole maker of games for their console and they had the right to do that with their copyrighted property.

With that said, I believe Accolade reverse engineered the software knowing it was morally wrong. I do not believe a company has the right to reverse engineer any product it wants. Taking an all ready thought of idea and creating a new product is different than copying another product verbatim. Reverse engineering affects the theory of utility. The incentive to come up with new ideas would be lost because there would be no reward for it. Let’s say Microsoft had the ability to create a new operating system and knew it could be reverse engineered the day they released it to the public.

Would Microsoft put forth the effort, time, and resources to make this new product? I know I wouldn’t because Microsoft’s competitors could produce the same product with less overhead. This would be giving Microsoft’s competitors an advantage because they could sell the same product for less money. This would potentially put Microsoft out of business. Economies inevitably couldn’t evolve to serve societies better. 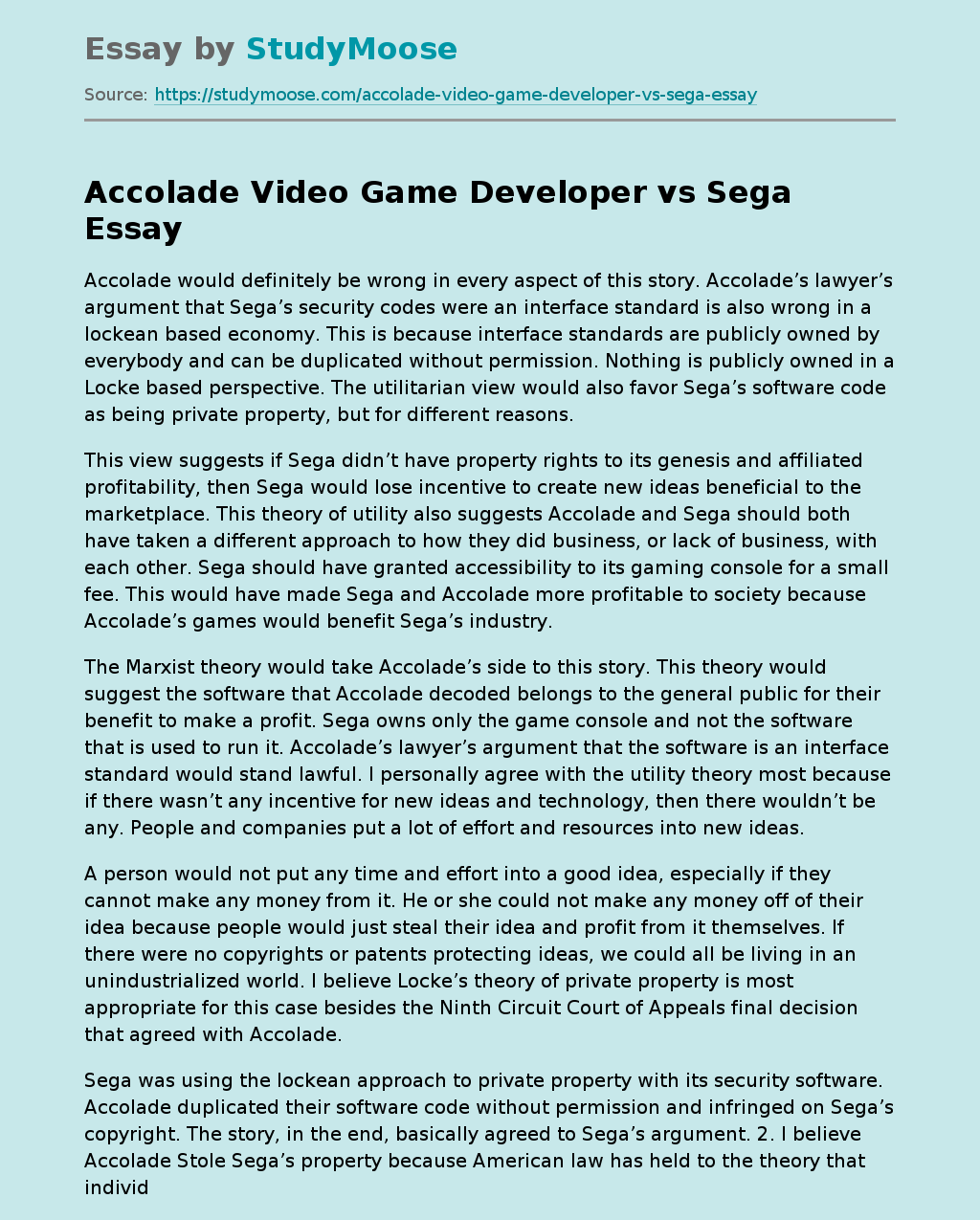