Academic Writing on Riders to the Sea

Edmund John Millington Synge (1871-1909), an Irish playwright, wrote ‘Riders to the Sea’, one of his first two one-act plays (the other one is ‘The Shadow of the Glen’). ‘Riders to the Sea’ (1904) is Synge’s dramatic response to the experience of his frequent sojourns in the Aran Islands. ‘Riders to the Sea’ dramatizes the archetypal struggle of man against the hostile natural forces and rends man’s inevitable defeat in the conflict against predestination which brings out a tragic effect at the end of the play.

Turn in your highest-quality paper
Get a qualified writer to help you with
“ Academic Writing on Riders to the Sea ”
Get high-quality paper
NEW! AI matching with writer

This one-act play is a tragedy that portrays a compressed and synthesized picture of hopeless struggle of an Aran woman and her helplessness against the fate. Ernest A. Boyd (American critic and author) in ‘The Contemporary Drama of Ireland’ states that ‘Riders to the Sea’, sums up the essence of the “constant struggle of the Aran islanders against their relentless enemy, the sea. ” The protagonist in J. M. Synge’s one-act play Riders to the Sea, Maurya, is an old Aran fisher-woman, whose name echoes the Greek word moria, meaning fate.

See more: Is the Importance of being earnest a satirical play essay

Riders to the Sea does not fit the mold of classic Greek tragedy, as Aristotle defined it, for its central character is a peasant, not a person of high estate and she does not bring about her own downfall. Maurya is thus distinctly different from the classical protagonists such as Oedipus, Agamemnon or Antigone, all of whom are highborn. While classical and Renaissance tragic protagonists undergo suffering owing to their ‘hubris’ or ‘hamartia’, Maurya appears to be a passive and helpless victim in the hands of the destructive sea.

In Maurya’s case, no profound question seems to be raised about the complicated relationship between human will and predestination. Yet, she resembles the great traditional protagonists in her heroic power of endurance and the spiritual transcendence over her suffering. In J. M. Synge’s play, Riders to the Sea, the audience is confronted with a story of an Aran mother of eight children living on an island off the western coast of Ireland.

When the play opens, we find out that she has lost her husband and five of her six sons to the sea, which is necessary for livelihood as means of transport to the mainland and also for participation in the fishing industry. Her two daughters, Cathleen and Nora, are also present. The lone son, Bartley, needs to take the horses to fair across the bay, and Maurya begs him not to leave. But Bartley insists that he will cross the mainland in spite of winds and high seas. Mad and aggravated at Bartley for not listening to her pleas, Maurya allows him to go, however, without her blessing.

Cathleen and Nora persuade their mother to chase Bartley with the food they forgot to give him and to give him her blessing regardless of her fears. Maurya returns horrified with a vision she has seen of Michael riding on the horse behind Bartley. When the girls show her Michael’s clothes her only response is that the good white boards she had bought for his coffin would serve for Bartley instead. Even as she speaks, the neighboring women troop in, their voices raised in the “keen,” that monotonous Irish chant of grief.

Men follow bringing the body of Bartley. The play crawls to the end through Maurya’s fatalistic submission. They’re all gone now and there isn’t anything more the sea can do to me. ” She can sleep now with no worry but that of starvation. In the everlasting battle between the life-giver and the destroyer, between the mother and the destructive sea, Maurya, at last, ironically, is triumphant. Having lost all her sons, she has been liberated from the everlasting cycle of suffering and grief.

At this point, she seems to withdraw her sympathy from the community of mankind when her disillusionment compels her to state – “I won’t care what way the sea is when the other women will be keening. The final phase of Maurya’s suffering reveals a transition from misery to a profound tragic transcendence. Like the Sophoclean protagonists, she achieves knowledge and enlightenment out of misery and heroically accepts her tragic mess. Tragic wisdom illuminates her mind into the understanding that death is an essential episode in the universal cycle of life. Instead of accusing God, she reconciles to her fate bravely and gracefully and accepts her misery as the sublime will of God. Reconstructing a broken life into a new existence of faith and self-sacrifice, she achieves tragic dignity and elevation in the eyes of the audience.

She invokes God’s blessings upon all – “…. may He have mercy on my soul, Nora, and the soul of everyone is left living in the world. ” Maurya, as portrayed by J. M. Synge in ‘Riders to the Sea’, is truly an unforgettable character who wins our admiration by her unusual power of endurance, by her capacity to withstand her misfortunes, and by her dignified behaviour at a time when she has suffered the most painful bereavement of her life. Finally, she gives expression to her stoical acceptance of her and fate in the following memorable words— “No man at all can be living forever, and we must be satisfied. Declan Kiberd, an Irish writer and scholar in his ‘Synge and the Irish Language’ (Macmillan: London 1979)notes that Synge’s dramatic language tries to allow the Aran islanders “to speak directly for themselves,” demonstrating that Maurya’s famous words, “No man at all…………. must be satisfied” (III, 27), are translated almost directly from a letter to Synge from an Inishmaan friend. Maurya is drawn to be regarded as tragic character in the proper sense of the word. After all we are reading a one-act play in which an elaborated portrayal was not possible.

Besides, there is no real conflict either in Maurya’s mind or between Maurya and circumstances. She has just to remain passive because there is no other choice for her. ‘Tess’ in Thomas Hardy’s famous novel ‘Tess of the D’urbervilles’ is a tragic character because she puts up a brave fight against adverse circumstances, but nobody can fight against the sea which is the cause of the tragedy in Synge’s play. The end comes inevitably and this again is traditional. Dunbar’s ‘Lament for the Maker’s’ may stand to embrace them all. So to quote: “Since for the Death remeid is none,

Best is that we for Death dispone, After our death that live may we: Timor Mortis conturbat me. ” The drama by virtue of being a one-act play unavoidably limits Synge’s scope. But, in that limited scope Synge has achieved remarkable effect of tragic impact. The result is one of the most deeply moving tragedies ever written. W. B. Yeats on Synge’s conception of style states “The first use of Irish dialect, rich, abundant, and correct, for the purpose of creative art was in J. M. Synge’s Riders to the Sea” (Plays in Prose and Verse Written for an Irish Theatre, London: Macmillan 1922).

Academic Writing on Riders to the Sea. (2017, Jan 10). Retrieved from https://studymoose.com/academic-writing-on-riders-to-the-sea-essay 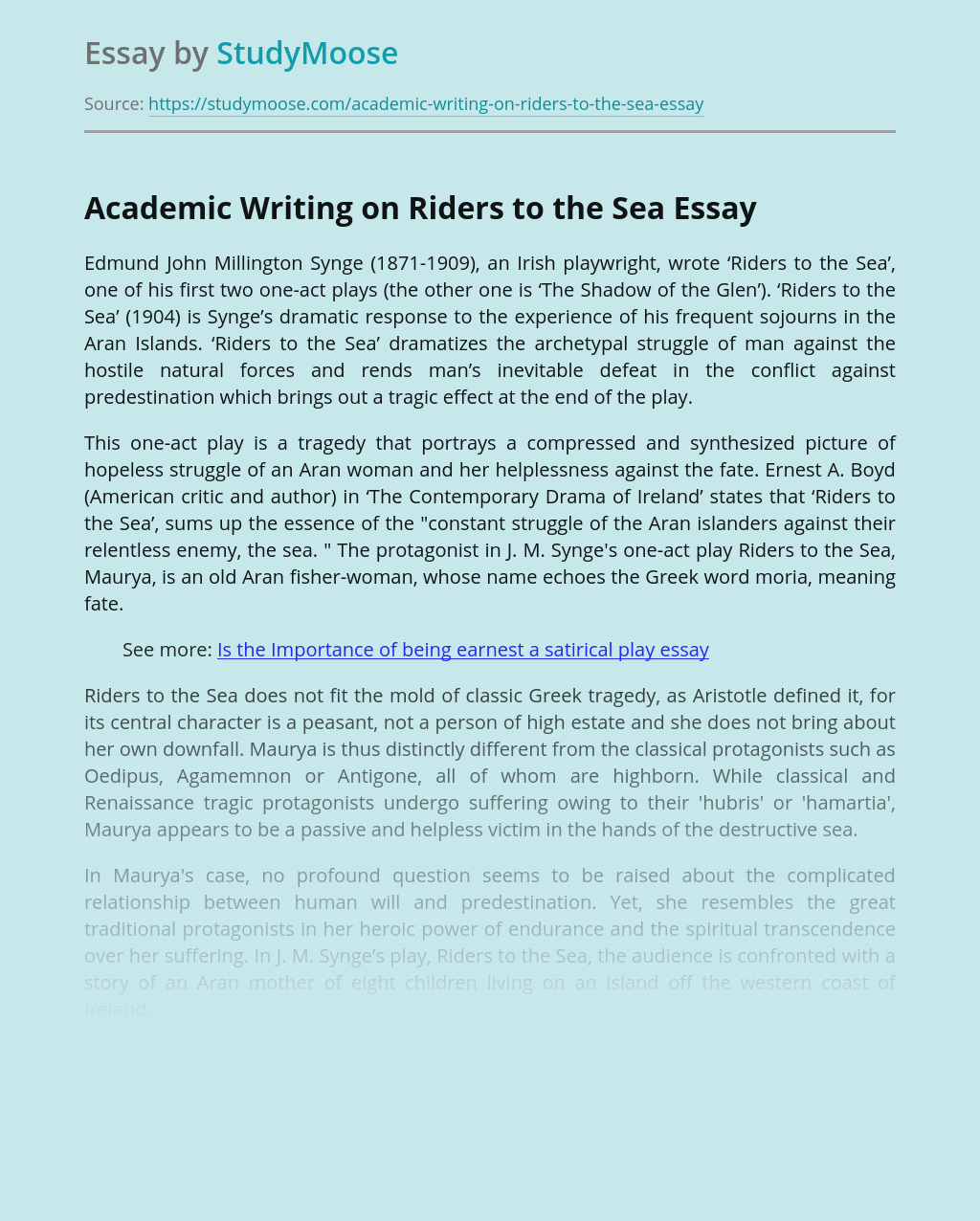 Turn in your highest-quality paper
Get a qualified writer to help you with
“ Academic Writing on Riders to the Sea ”
Get high-quality paper
Helping students since 2015
Stay Safe, Stay Original