This annotated bibliography was prepared at Stanford University under the supervision of faculty from the Law School and the School of Education working in collaboration with Challenge Success. It is not intended to be all-inclusive. Please feel free use this bibliography and cite it or the materials in it. You can use it several ways.

Longitudinal studies show an increasing pressure placed on children and adolescents in terms of expected time spent on school and school-related work, which could result in less time for things like extracurricular activities, sleeping, and spending time with family (Juster, Ono, & Stafford, 2004).

Yadusky-Holahan, M., Holahan, W. (1983). The effect of academic stress upon the anxiety and depression levels of gifted high school students.

Gifted Children Quarterly 27(42): 42-46. Keywords: academic stress, student anxiety and depression, living situation, gifted students The primary goal of this study was to understand the relationship between living situation (living alone or with a roommate) and anxiety and depression for high-ability, high-achieving students. Findings show that stressors relating to the school environment, academic expectations, and workload were found to be potential contributors to heightened depression.

The study had various hypotheses, including the prediction that increased anxiety and depression levels would be found for those students that lived alone, because they were lacking peer support. The participants included sixty twelve-grade students who attended a competitive public school. Thirty of these students lived alone, and thirty had chosen to live with roommates. Measures were taken to limit environmental effects, and three instruments were used to gather three separate tests over a five month period.

These instruments included The Depression Adjective Check Lists, the IPAT Anxiety Scale, and the Mooney Problem Check List. The data was gathered before school started, in the middle of the semester, and just before final examinations. Results showed that depression was significantly higher mid-semester versus beginning of the semester, except for females with roommates.

Males with roommates and females without roommates reported significantly higher levels of depression during the final exam period. Stressors relating to the school environment, academic expectations, and workload were found to be potential contributors to this heightened depression.

Other findings were that only women in single rooms had increased levels of academic stress as the semester progressed (though this may have been due to environmental factors). In sum, this population demonstrated a link between academic stress and depression. This finding, as well as other finding pertaining to living situations, imply that there needs to be increased social interaction in residential living schools to help students cope and gain peer support in a high-stress environment.

Data from 254 high school students in an affluent private high school revealed that student and parent characteristics influence the experience of stress during college applications. Students with lower socioeconomic status, higher seniority in the school, or whose parents were most heavily involved in school affairs demonstrated the greatest blood pressure increases.

The researchers employed two studies, the first was to assess cardiovascular changes caused by the SAT among eleventh grade students, and the second study involved interviewing students (grades nine through twelve) to elicit cardiovascular responses to the stress of college applications. Though the results of this study cannot be generalized to other types of school environments, there are important implications regarding the influence that student/parent characteristics and school environments have on stress levels surrounding the college application process.

Keywords: test anxiety, general anxiety, international comparison This study demonstrates that the link between examinations and anxiety are longstanding. The researchers involved in this study attempted to validate a measure of anxiety, which had been used in their previous studies.

The researchers were able to see if correlates of test anxiety were similar across two different cultures, as well as examine the effects that a school examination has on test anxiety. English children must take the “eleven plus” examinations, which determine their educational future and (at that time) had no counterpart in American culture. After distributing the Test Anxiety Scale and the General Anxiety Scale to equivalent groups of English and American children, results confirmed the hypotheses of the study.

English children had higher test anxiety scores than American children, because of the greater importance of their school exams. The children in both countries had similar scores for general anxiety. As school grade increased, the importance of test examinations increased as well. Finally, girls had higher scores on both types of anxiety than boys in both countries, which researchers attributed to more social acceptability of girls to express fear and distress. Again, this study’s findings demonstrate that the link between examinations and anxiety are longstanding. The increasing importance of tests in both cultures could imply the increasing levels of anxiety in children.

Academic Stress. (2016, May 01). Retrieved from http://studymoose.com/academic-stress-essay 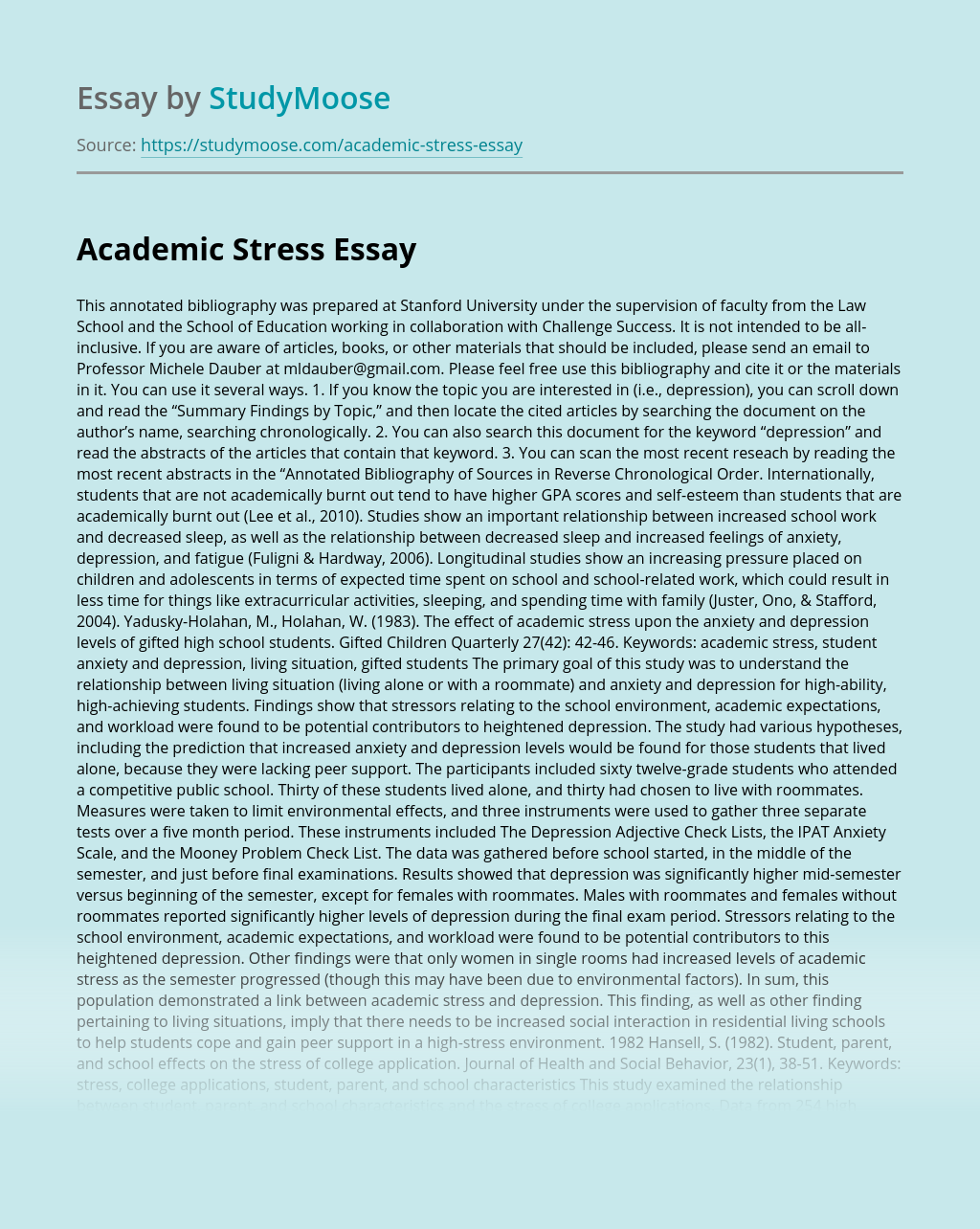