Writing is divided into many categories, two of them being academic and non-academic writing. In order for a person to write in academic form, time, effort and money are invested in carrying out certain experiments or research concerning the field being discussed to use as evidence to support the claim. Also, citations are usually used as they have a powerful influence on the audience and tend to impel them towards believing the writer’s claim.

On the other hand, non-academic writing, also referred to as personal writing, can be written by anyone at anytime as they are usually personal, emotional and impressionistic.

Don't use plagiarized sources. Get your custom essay on
“ Academic and Non-Academic Writing ”
Get custom paper
NEW! smart matching with writer

It could discuss a person’s opinion or point of view on a certain matter.

Academic and non-academic writing share a few similarities; however, their differences exceed the ways in which they are alike. Although Frehse uses many quotation in ”Manage Your Own Career”, it is considered non-academic whereas Tyson’s ”Working With Groups” is academic as he uses scientific evidence to support his claim.

We can perceive that Frehse’s piece is non-academic from his style of writing and his usage of first and second person points ‘I, you, and we’ where he refers to himself and addresses the audience.

Conversely, academic writing includes the third person point of view and that element is illustrated by Tyson’s work. He doesn’t refer to the audience as ‘you’, yet he manages to clarify his ideas through organization and the use of examples. He uses th e behavior of animals to illustrate an image of the reactions of humans to situations which give rise to the fear in them.

Frehse seems to express his opinion on discovering one’s own purpose throughout his work by using phrases such as ‘I want to explore’ and ‘I believe that’.

To support his claim, he uses expert quotations with the aim of getting the audience to agree with his point of view. Academic writing is usually written for those who are interested in the field, like specialists. In contrast to Frehse, Tyson uses facts in addition to observations and quoting experts to get people convinced with his argument. For example, when he mentioned that conflicts can be positive, he quoted Drucker and described his statement as ‘nicely argued’.

He also described the types of group work as well as their advantages and drawbacks. So far, besides the usage of quotations to support the statements made by both writers, the only other similarity is the organization of ideas. Both used headings and subheadings to divide their work into different categories. Additionally, they are both written for the general public. On the whole, the two pieces discuss different subjects in different manners therefore their dissimilarities can be easily identified.

Academic and non-academic writing are of entire variance from one another. However, there are characteristics which are common between them like the quotations of people specialized in the field being argued with or discussed. Both writers supported their claims flourishingly and the audience would be in favor in their beliefs or statements. 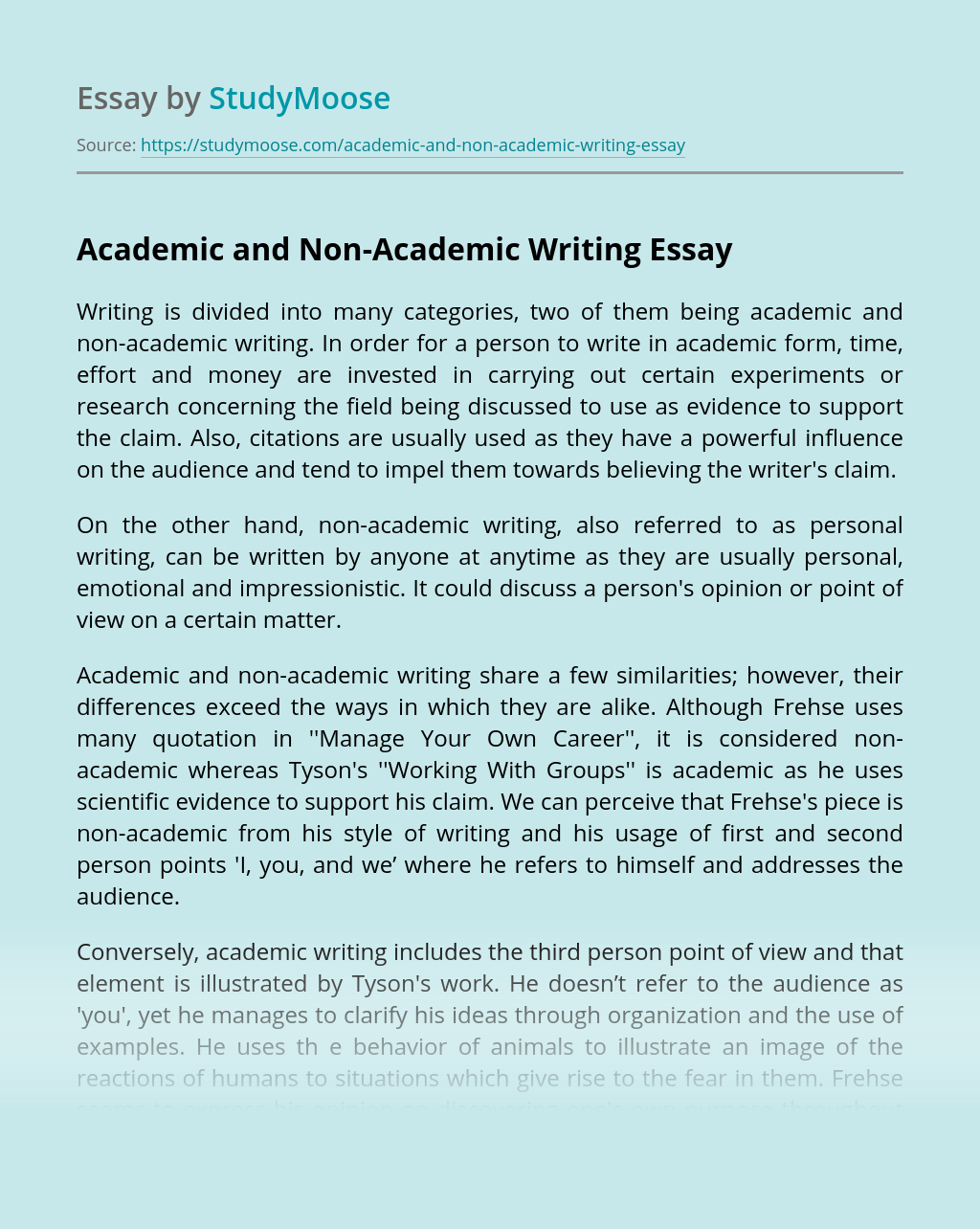