There are a number of diseases and mental illnesses affected by genetics. These disorders can be brought about through genetics alone, another factor altogether, or a combination of factors. While many believe that genetics is a simple aspect of biology and the study of the human body, it is in fact very complex and multifaceted in both its causes and effects. Perhaps one of the least understood implications of genes are their impact on phobias. A phobia is defined as a mental disorder related to excessive fear or uncontrolled anxiety stemming from interaction with an object or situation.

Don't use plagiarized sources. Get your custom essay on
“ Diseases and Mental Illnesses Affected by Genetics ”
Get custom paper
NEW! smart matching with writer

Phobias of any kind can be brought about via genetic entry. This fact is proven by the research of the BDNF gene, its reactions, and possible mutations. The BDNF gene is linked not only to phobias but also to other mental disorders, such as post-traumatic stress disorder (PTSD). Upon further research, the impact of the BDNF gene on one’s experience of phobias, PTSD, or other anxiety disorders is not only related to genetics generally but also epigenetics, specifically.

Epigenetics is shortly defined as changes in gene expression. Due to the connection of all of the above, there are scientific inferences to be discussed. A sample of rats was tested observationally, and it was found that exposure to methylation due to certain triggers yielded a phobia after repeated exposure. The research of the BDNF gene on the live animal subjects infers for humans that the expression of one’s genes – not just one’s genetic code itself – significantly affects one’s experience of phobias, and also their descendants’ experience of the same phobias.

Phobias are a type of anxiety disorder, that causes a person to experience extreme panic attacks or fear concerning an object, place or situation. Phobias are ranked as simple phobias, social phobias and specific phobias. The simple phobias are mostly irrational fears of an object or situation. Social phobias derive from an extreme feeling of low self esteem leading to the fear of being judged or embarrassed by or in front of others in the proximity (Nordqvist 2017). Specific phobias are usually derived from the extreme fear of animals such as dogs or cats and have no real evidence of why, yet the fear is persistent and crippling. The Phobias disorder is associated with the amygdala of the brain which is located directly near the hippocampus and sensory cortex of the brain. The amygdala triggers the ‘fight or flight’ sensory in the brain, the hippocampus controls emotion and memory, and the sensory cortex controls sight, smell etc. This explains the side effects associated with phobias, which can include a choking sensation, chest pains, nausea, and even confusion. Phobias can be described in other types as well; Animal phobia such as dogs or snakes, Environment phobias such as storms and situational phobias such as driving (Shelton). All of the above adds to the mental condition of phobias.

While it has been known that genes play a role in the experience of phobias, it has been less clear as to how. An important answer may be found in an examination of epigenetics. Epigenetics is simply defined as a way to change the expression of a gene. Furthermore epigenetics is broken down into three sections or mechanisms: DNA methylation, Histone modifications and Non Coding RNA mechanisms. Upon research, it is found that epigenetics plays a role in the gene expressions in phobias. Specifically, the Brain Derived Neurotrophic Factor (BDNF gene) – which is imperative to the nervous system resulting in proper memory and cognitive functions – affects one’s experience of phobias. DNA methylation may be proven to be the culprit behind the effective BDNF expression as it relates to phobias. The DNA methylation is the adding on of a methyl group to DNA resulting in modification of the expression of the gene, causing the gene to be effectively “turned off”. Because the BDNF gene controls memory function among other cognitive abilities, when it is compromised or turned off it triggers an episode of some sort for the subject. This subject could become very fearful of an environment, experience or another person based off the memory – conscious or subconscious – of something horrendous happening. The person or subject may also experience extreme anxiety, temporary paralysis and sweating when in a fearful situation (Nordqvist 2017). If the subject’s BDNF gene is turned off by methylation in relation to a specific trigger, then phobia related to that trigger will be expressed in the subject and that phobia will be passed down at least to the second generation.

The subjects for this study were 8 mice, 4 male and 4 female, and this group of mice were split up into two sets of four (2 male and 2 female per group). Group 1 of the mice undergo fear conditioning, which exposed the mice to an electric shock every time a certain smell was released into their chamber. Group 2 of the mice was the control group; they were exposed to the scent but without the electroshock.

An ounce of the scent was released each time to each subject, via a spray bottle. Electroshock was applied to the fear-conditioned group at a value of 40 Hz for 1 second each time.

Blood samples were taken of each group at the conclusion of the first phase to confirm observable reactions on the gene level via methylation.

After the gestation period (roughly 28 days removed from the mating day), the female mice gave birth to four-seven babies each, but only one was taken from each female to encompass Group 3 of this experiment.

After 28 more days (time of maturation), the offspring were subjected to blood samples to ascertain any measure of epigenetic activity. Then, the mice were exposed to the same scent to which their parents had previously been exposed, but without any electroshock fear conditioning. The scent was released three times a day for three days. The observed reactions of the mice to the scent were recorded.

The results from this experiment show a significant correlation between the presence of fear-conditioning triggers and later observations of phobia, as well as the presence of observed phobia in the second generation.

By the third round of testing on Day 1, Group 1 (Fear-Conditioned group) began to shows signs of angst related to the release of the scent, as it was associated with the subsequent electroshock. By Days 2 and 3, Group 1 exhibited significant anxiety related to the release of the scent. Even as the electroshock was reduced each day for the next three days, the fear of the scent had settled in and the mice in Group 1 continued to show significant phobia. Even on Day 6 when there was no electroshock present when the scent was released, the mice exhibited similar anxiety. The blood samples taken after the first 6 days confirms methylation change. The mice began to equate the scent to the electric shock and thus became highly paranoid and fearful. The reaction of the mice was due to low methylation of DNA on the sensory gene – the BDNF gene.

The control group exhibited no such epigenetic change and displayed no signs of phobia associated with the scent.

Results are illustrated in the chart below.

-The fear conditioned mice reacted adversely to the scent even after electroshock was removed.

-This group of mice showed no adverse reaction to the electroshock.

-The findings for the offspring were confirmed through blood samples that confirmed the epigenetic effect resulting in a phobia or the lack of.

The results of the experiment support the hypothesis: methylation of the BDNF gene by way of fear-conditioning was positively correlated with the presence of phobia, not only in the fear-conditioned generation but also in the second generation.

The implications of this result should not be understated. Phobias specifically and mental disorders in general have been some of the least understood occurrences in relation to genetic makeup and manifestations. If genes are in fact a statistically significant variable in the presence of phobias in individuals, then it is possible that genetic therapy is a remedy for those suffering from chronically severe anxiety and fear. If the knockout of a gene via methylation contributes to phobias, then a reactivation of that gene could have the opposite effect.

However, several questions remain and the results should not be considered conclusive. One such question is the relatability of the mouse research to human subjects. Human gestation periods and lifespans are much longer than that of mice, so it is not completely clear that humans would respond in the same way. Another area of inconclusiveness relates to the statistical significance of social factors against the significance of the genetic code. Even if genes account for a statistically significant cause of phobias, there may be significant overlap with social factors.

Further research is needed to support the significance of genes on the experiences of phobia in human beings. There have been supported findings from other researches, these researchers found that DNA methylation of the BDNF gene in the blood may be the predictor of gene expression in the BDNF gene. Some have also related epigenetics to the BDNF gene to prove certain mental diseases like PTSD and bipolar disorder. 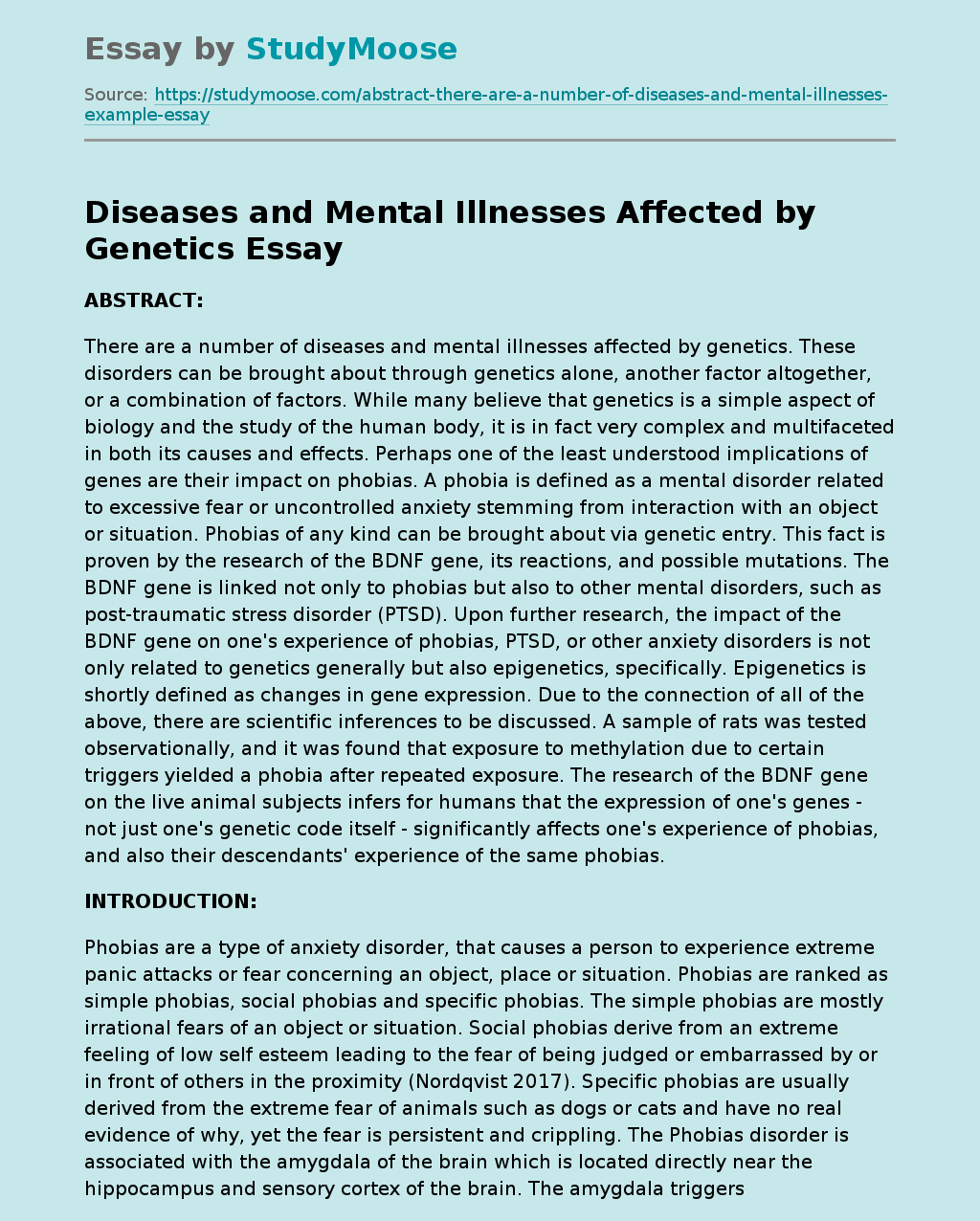