Absolute Vodka: Defending and attacking for a better position in the global vodka market.

1.Which alternative marketing strategies does V&S Absolut Spirits have to increase its market share for:

Since V & S predominantly (and rightly so) focuses on Brand promotion and awareness, it carried out comprehensive advertising campaigns which aim to etch the brand and its image in the back of the consumers mind wherein when they think of Vodka they immediately make the connection with Absolut.

(a)Absolut Vodka in the USA?

It is noted by Bengt, President of V&S Absolut Spirits, that the market share of Absolut Vodka in the US has reached saturation point.

Turn in your highest-quality paper
Get a qualified writer to help you with
“ Absolut Vodka ”
Get high-quality paper
NEW! AI matching with writer

-One option of countering the situation is with an aggressive forward attack on its number one competitor – Smirnoff. As the trend amongst US consumers has shifted to ‘drinking less but better’, V & S Absolut should focus on promoting their beverage as a cleaner and pure alcohol (Super-premium) in comparison to the American Smirnoff which is just a premium alcohol.

-Locally produced alcohols such as Stolichnaya and Moskovskaya are only considered ‘Brands’ when exported. As such, V & S marketing team should endeavour to promote Absolut as an up market brand preferred over ‘local vodka’.

(c)Absolut Vodka in other parts of the world (including eastern Europe)?

-Viral videos are taking the cyber world by storm and are universally accepted by internet users of all ages. V & S should look to engaging the masses by promoting Absolut as an innovative and trendy brand as opposed to its competitors.

2.In which region (country) of the world would you recommend V&S Absolut Spirits to allocate more marketing resources?

Europe (including Eastern Europe) as a major portion of Vodkas drinkers are found in this region, also given that the US market share has reached saturation it would be superfluous to allocate any extra resources towards this market.

3.Does Absolut Vodka have the right competences for achieving international success for its Absolut Cut?

Yes. The flavoured beverage with reduced sugary taste is aimed at a more mature demographic.

4.Which new geographical regions would you recommend for the internationalization of the Absolut Cut?

The US market as it is known for its trendy night cubs and rage parties. 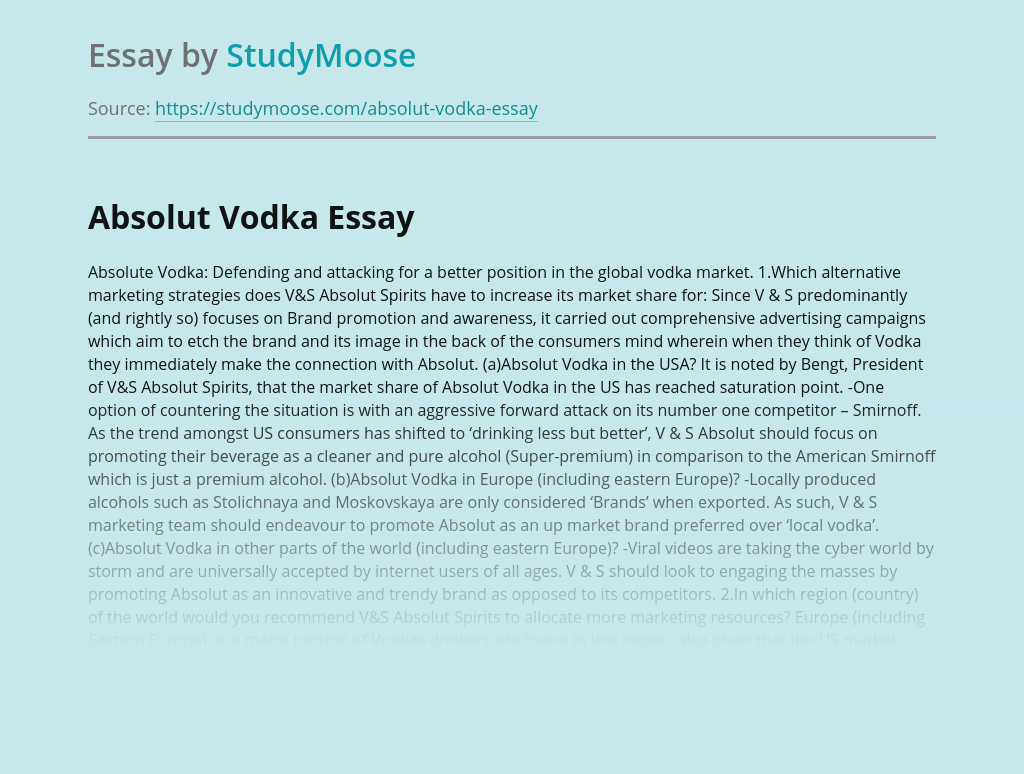 Turn in your highest-quality paper
Get a qualified writer to help you with
“ Absolut Vodka ”
Get high-quality paper
Helping students since 2015
Stay Safe, Stay Original