The destruction of a legacy

In the year 1810, Abraham Lincoln was the man who had eyes for the future. He had remarkable hopes, dreams and goals he wished to accomplish for his country. He was a member of the union and was working towards freeing the slaves, and crushing the confederacy. Most of the country supported him and his goals. Yet there were still a few states that supported slavery and wanted Lincoln dead. Confederates were worries that Lincoln would take away their rights.

Don't use plagiarized sources. Get your custom essay on
“ Abraham Lincolns Assassination ”
Get custom paper
NEW! smart matching with writer

However the confederates did not see that Lincoln was made for greatness. Unfortunately, his life was cut short by: John Wilkes Booth, Abraham Lincoln’s assassin. On April 14, 1865, John Wilkes Booth became the first person to assassinate an American president when he shot and killed Abraham Lincoln in his box at Ford’s Theater in Washington (Kauffman). John Wilkes Booth was a supporter of the confederacy. He was convinced Lincoln was going to destroy the constitution. So out of frustration, anger and delusion he begun to plot his plan to assassinate president Lincoln.

Booth happened to be a known actor who preformed at Fords Theater so he had no problem attending the play. Because Booth was an actor he knew the details and the schedule to My American Cousin. Wilkes was able to go in to Lincoln’s booth and time the shot perfectly with the music from the play so that people attending the play would not notice.

“From a distance of about four feet behind Lincoln, Booth fired a bullet into the President’s brain. Major Rathbone sprang up to grab the assassin, but Booth wrested himself away after slashing the major with a large knife. Booth rushed to the front of the box and Booth leapt over the railing, where he fractured the fibula in his left leg. Rising from the stage, Booth shouted, “Sic semper tyrannus!” and ran across the stage and fled from the back of the theatre” (Bogar). Many say that Wilkes did not work alone and some say he did, unfortunately that will never be known. “While many people assumed that hidden forces were behind the assassination, others speculated that Booth had acted on his own. The reason: he wanted to immortalize himself” (Kauffman).

Although back in that time period, people would often forget to check and examine every speculation of evidence, or not even have the means to investigate said evidence, so things would go overlooked. Such as John Wilkes Booth just being a small pawn in the larger scheme of Abraham Lincolns’ assassination. John Wilkes Booths’ assassination of Lincoln is said to be part of a whole conspiracy theory. When Booth began formulating a plan for Lincolns’ assassination, he recruited friends for his operation. Booth and his fellow conspirators met to plan their assassination on the president. They originally planned to abduct the president and hold him for ransom, however things did not go as planned. “When Richmond fell, the plans turned to assassination. First, there was the failed effort to blow up the White House, followed by the successful effort to kill Lincoln at the theater”(Steers). Wilkes heard the president would be attending the play My American Cousin, so Wilkes jumped on that opportunity and made a plan with his conspirators. Unlike Booth, his conspirators did not exactly support the idea of abducting the president during the play so they decided to terminate the plan.

Nevertheless Wilkes when A-wall and decided to move forward with the plan, with the result being successful. “The idea that Lincoln was killed as part of a grand conspiracy of Confederates arose almost immediately after the assassination” (Steers). Confederates wanted Lincoln dead for the hope for the confederacy rising. “Lincoln was viewed as a legitimate wartime target” (Steers). Part of the theory of reason for Lincolns’ assassination are linked to the Unions failed raid on Richmond. This raid was viewed as incriminating evidence of Lincolns’ determination and will to end the war. Ending the war was what the confederacy was afraid of. The confederacy wanted to be rid of Lincoln so they could not have to conform and agree to Lincoln’s new ideas and upcoming laws. To prevent Lincoln’s ideas from becoming actions, the confederacy took matters in their own hands. Lincoln’s assassination was the end of a legacy. He died to young and to soon. Abraham Lincoln was betrayed by his country, being left for dead with out any peace but only the hope of his ideas and goals to be carried out my upcoming successors. His assassination was unfair and uncalled for. His country went behind his back and plotted his death because some people were too ignorant and arrogant to see Lincolns full potential and what Lincoln could have provided for America. Who knows what Lincoln would have accomplished if his death wasn’t so early. 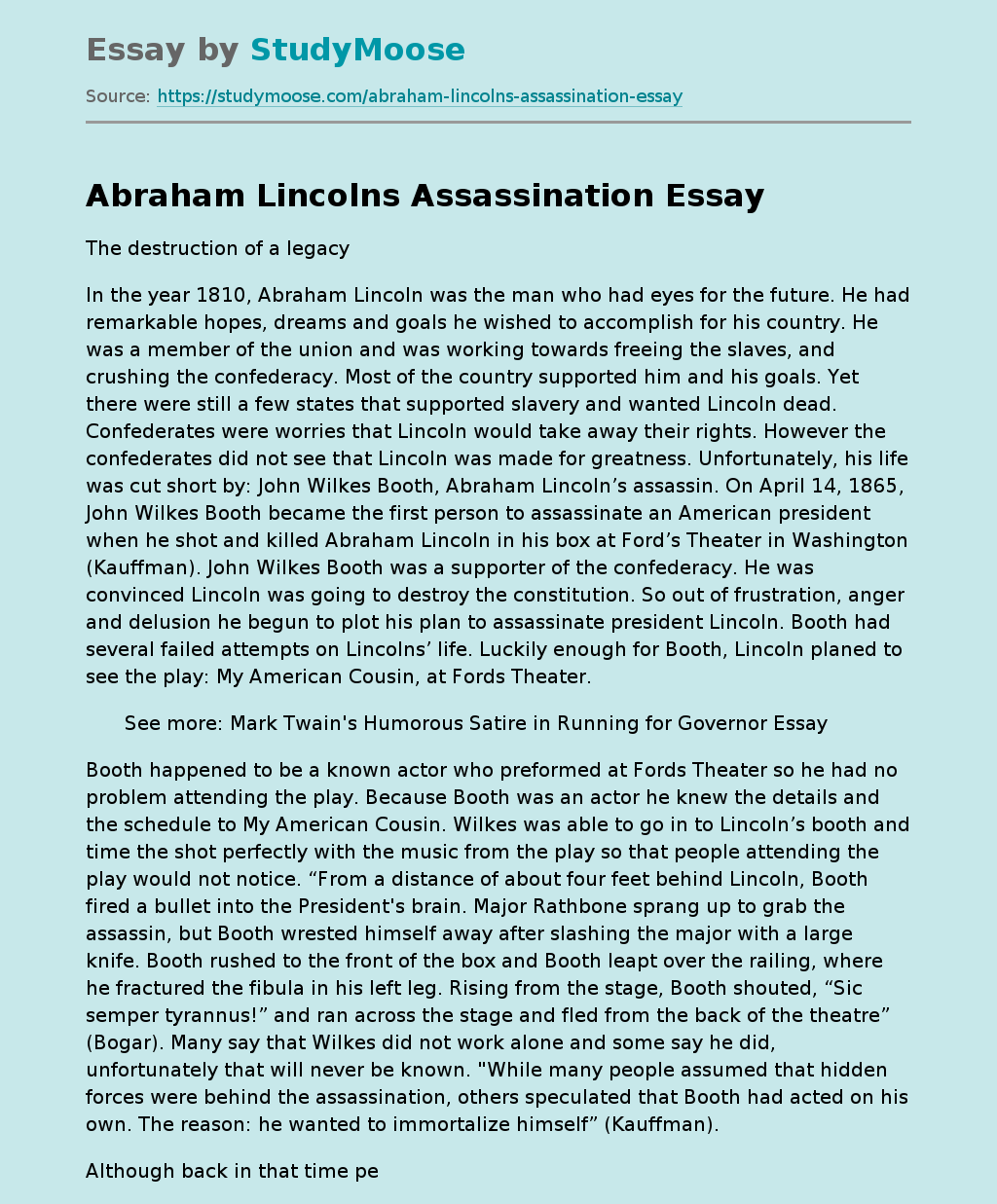