About The Movie A Beautiful Mind

You have to wonder what goes through the mind of a person with schizophrenia. I have often wondered if the people who have this disorder have had experiences similar to those of John Nash, portrayed by Russell Crowe, the Oscar nominated best actor in a leading role. The movie was A Beautiful Mind. This 2001 film received four Oscars in 2002 for Best supporting Actor, Best Director, Best Picture, and Best Writing Screenplay Based on Material Previously Produced or Published.

I think all too often people are given medication and other intrusive forms of treatment for mental illness when cognitive therapy with motivating factors can help to overcome the crippling illness.

Don't use plagiarized sources. Get your custom essay on
“ About The Movie A Beautiful Mind ”
Get custom paper
NEW! smart matching with writer

This is the drama represented in this film. This film depicts mathematician John Nash and his lifelong struggles with his mental health. Enrolling at Princeton in 1947 as a graduate student, Nash almost immediately stood out as an odd duck (Honeycutt). He devoted himself to finding something unique, a mathematical theorem that would be completely original.

He kept to himself for the most part and while he went out for drinks with other students, he spends a lot of time with his roommate, Charles, who eventually becomes his best friend. Five years later John is a professor at MIT where he meets and eventually marries a graduate student, Alicia. The problem that John Nash writes on the blackboard in his lecture is a real one (unlike in other movies, where math on boards is usually either too simple or fake).

There is an important theorem in mathematical physics that directly says the answer to this is 1.

Later, when he discusses the problem with Alicia Nash, he makes additional restrictions for the solution, without which the problem is much harder, so he is pretty confident she didn’t solve it. Over time however John begins to lose his grip on reality, he secretly goes to work for the Pentagon and an elusive spy, breaking hidden messages from the coded newspapers sent by Soviets to operatives in the United States, warning of Armageddon (David).

As the depths of his imaginary world are revealed, we find out that Charles, along with his niece, is a figment of his imagination; Nash withdraws from society and eventually is institutionalized and diagnosed with schizophrenia. Years of partially successful psychiatric treatment combined with medication follow, and although there was some success with this form of treatment, Nash realizes his thinking is a fog and his marriage is falling apart and to op it off he does not feel like he is a husband. With tremendous effort and much practice he learns to ignore the delusions of his mind and focus on reality, Alicia stands by him and continues to support Nash in his daily struggle. It’s not until the 1970’s that John makes his long journey back into the world of academics, gradually returning to research and teaching. In 1994, John Nash was awarded the Nobel Prize in Economics (David).

Paraphrasing Nash’s acceptance speech, in the movie Russell Crowe sums up his career by saying “And I have made the most important discovery of my career, the most important discovery of my life: It is only in the mysterious equations of love that any logic or reasons can be found (Crowe). ” In conclusion I would like to state that by being compassionate and loving towards a person with mental illness it is possible to help them to cope with life without drugging them. Thank you. Are there any questions?

About The Movie A Beautiful Mind. (2016, Sep 09). Retrieved from http://studymoose.com/about-the-movie-a-beautiful-mind-essay 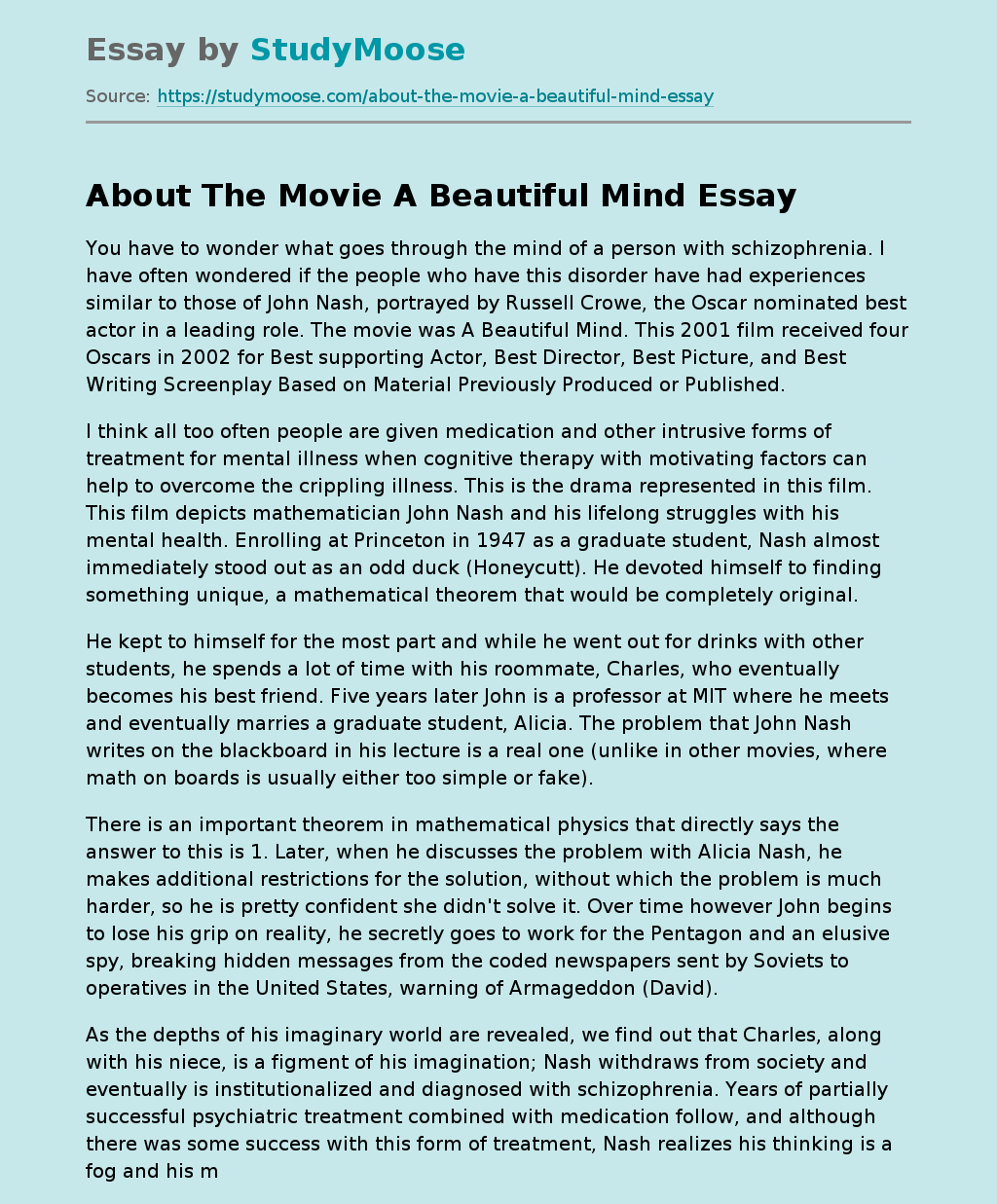