About His Person Analysis

“About his person”, suggests that this poem is about what is found about the person of a dead corpse. It also follows the theme of identity because we as the reader are attempting to analyse the poem to find out the corpse’s characteristics and why he died. “About he person”, can also be linked to us because we are made to think about what makes up our own personal image.

My first observation about the poem is the fact that it is spilt into two line couplets.

Don't use plagiarized sources.
Get Your Custom Essay on About His Person Analysis Just from $13,9/Page

This could be linked to the content because the lines are short which could represent his short life, but they also give the impression of a list, which ties into the fact that the poem is basically a catalogue of what was found on the body.

Stanza one says that the corpse had exactly five pounds fifty in change. This in itself is strange because it isn’t normal to carry around that exact amount of money.

The comma on line one helps to exaggerate the fact that this isn’t normal and we are mad to think of possible reasons for him having this money. The next line shows that a library card was found on the corpse and that it was on its date of expiry. This could symbolise that his life has ended or that his life, like the card, is no longer any good.

The next stanza is about a post card that was found. The card has been stamped and franked which means it is basically ready to send, but nothing has been written on it. This could definitely be a metaphor for his life, it has finished but he hasn’t done anything with it. The commas in this section make us read the words slower and help us to realise something wrong with the post card.

Stanza three is all about this person’s diary. It has been slashed from March 24th to the 1st April. This could have been his last week alive and the person could have died on April fools day, which could suggest a poor practical joke. It may also show that this person life was a joke and was meaningless.

Stanza four is a very interesting part of the poem. It says that the corpse is found with a brace of keys for a mortise lock. The word brace is symbolic for his death because when you kill foul you would normally end up with a brace of birds. The mortise lock suggests that his life was very complicated because mortise locks are complicated lock mechanisms. The next line describes that the man was carrying a stopped analogue watch. This is very symbolic of his death because time has stopped for the watch and for this person. The line is also written with commas between the words. This makes us read the words like the ticking of a clock, which is slowly dieing and eventually stops.

Stanza five contains the line, “A final demand.” This is normally a letter you get when you owe bank money. This would suggest that this man was so badly in debt that he killed himself. The next line could also prove this meaning because he was holding the final demand in his own hand and died because of the letter, but there is a different meaning to this stanza. “In his own hand,” could mean that the final demand was written in his handwriting. This would mean that he has written his final demand to the world that may mean the letter was some kind or suicide note.

Stanzas six and seven, link in with stanza five and helps to prove my last idea. The final demand is an explanation of why he committed suicide and has been put in his hand like a flower that has been beheaded. This flower could also be a metaphor for his death because the flower is dead but it could also reflect the reason for his death. I presume that this person has killed himself because of a relationship, this means that he would have probably lost something beautiful form his life, like his wife.

This is the same with the flower because it has lost its beautiful head. The next line a shopping list, links in with the fact that he has exactly five pounds fifty in change. He could have the exact money needed for what is on this list. This ties in with stanza four and the mortise lock because this person has a complicated life and this is shown by counting out the exact money needed for what is on his list. Most people would take excess money to the shops but this person has to complicate things.

Stanza eight shows that a giveaway photo was found inside this person’s wallet and that it was a very precious and treasured thing to the owner. The fact that this is a giveaway photo may mean that it meant nothing to the person in the picture but the fact that this is now banked in the heart of a locket shows it was very important to the dead man. It may be of his partner who is now dead which would make it even more treasured. The photo is described as being stashed and banked which shows how important it was to this person and how he tried to keep it safe.

The last two stanzas are very much liked together. The first is saying that there is no gold or silver wedding ring on his finger but instead crowing one finger is a weathered spot where a ring used to be. The fact that the word crowing is used means that this was extremely important to the wearer and has a royal quality to it. The last line has two possible meanings that I can see. The first being,” that was everything,” as being the end of list and that was all that was found on the dead body. The other could mean that the ring of unweathered skin was everything. The ring less finger could be the reason for the suicide. This person could have lost his wife and so killed himself.

While reading the poem I also get the feeling that this man didn’t commit suicide because of the death of his wife. I think that someone could have murdered this person and then his ring was stolen. I get this feeling for a number of different reasons. The first being that his analogue self-winding watch has stopped, it should continue to work because it is self-winding but instead it has been brought to an end. This is how I see this person’s death, he wasn’t supposed to die, but still his life has come to an end. I think that the watch was probably damaged during a fight of some sort and then gradually died.

I also think that this person could have been murdered because his note of explanation has been planted in his hand. This could mean that the note was planted because this links with the spray carnation, which is a flower, or it could have been planted on the body, in his hand, by the murderer. The final piece of evidence I see for the murder is that there was giveaway photo in his wallet. This could be a giveaway photo as I have already said or it could be a photo that gives away the identity of the killer or some information on the crime.

Overall I think that this poem shows a lonely guy who due to desperation has killed himself because of the death or divorce of his greatly loved partner. That’s why I would agree that the ring of white unweathered skin, “That was everything.”

About His Person Analysis. (2016, Jul 12). Retrieved from https://studymoose.com/about-his-person-analysis-essay 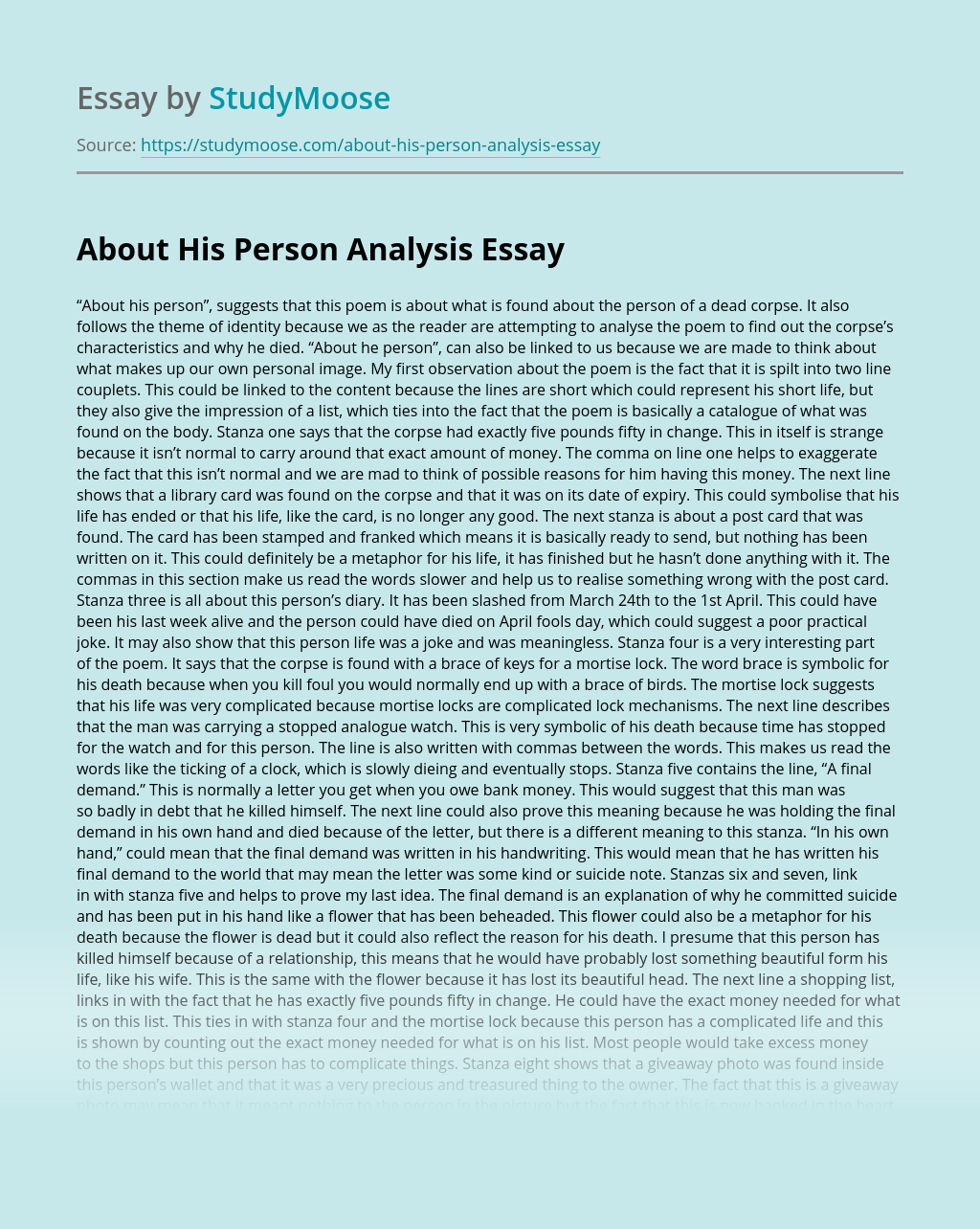 The Funeral Poetry of John Donne's

“As with most poets of his time, Donne was obsessed with death. Mesmerized by its mysteries, charmed by its allure, and convinced of the existence of an afterlife (as a result of Christian theology), he finds himself at times unable to settle on a particular view of the subject. While a considerable portion of Donne’s...

William Faulkner explains why the story is not about him, but his details about a lonely poor woman named Miss Emily is very unpredictable. Miss Emily is unable to grip the idea of death and suffers from denial. After the death of her father, the people from the town expected her to be in a...

Are Pretty Little Liars good at keeping their dirty secretes? Pretty Little Liars a favorite ABC Family series is built around five teenage friends, until one goes missing and is found dead. It has a strong hint of supernatural force that mean no good. It makes most popular vampire romances look anemic. Because of a...

Around 1330, a horrible plague was reported to break out in China. Trade between Asia and Europe currently was frequent, and in 1347 rat-infested ships from China arrived in Sicily, bringing the disease with them. Since Italy was the center of European commerce, business, and politics, this provided the perfect opportunity for the disease to...

The deaths of Tybalt and Mercutio take place in Act 3 Scene 1. The scene begins with Benvolio and Mercutio talking. Benvolio is trying to convince Mercutio to leave because, if the Capulets are around, there would be trouble e. g. “I pray thee great Mercutio let’s retire”. Benvolio is used by Shakespeare as a...