Gauhati or Guwahati, the erstwhile capital of the state of Assam was earlier known as “Pragiyotishpura” (The Light of East). This city with a varied history dating back to the 6th century is also the most developed and important city of Assam.

The name suits Guwahati remarkably due to its terrain and structure and with the river Brahmaputra bisecting the city into two halves, the city represents a miniature Assam complete with a collection of all inhabitants, their lifestyles and their dependence on the mighty river.

Don't use plagiarized sources.
Get Your Custom Essay on About Guwahati Just from $13,9/Page

However, the presence of mighty Brahmaputra carving its way through the city makes for a romantic and memorable experience.

Guwahati is replete with various religious places, green hills, tea plantations, educational institutes and Art Workshops. The city with its ancient roots offers a plethora of archaeological sites, historical monuments and educative as well entertaining museums. The excavation sites and the artifacts recovered from the sites make for a very interesting and exciting audience. The city offers an opportunity to interact with not only the Assamese populace but also the immigrants from all adjoining states, thus making it a vibrant cosmopolitan city.

A visit to Guwahati is incomplete without satiating the taste buds with authentic Assamese as well as Eastern Indian food mix. The visit also demands acquisition of mementos from Assam to adorn the house. There is a wide choice for shopping in Guwahati where the artisans even from remote Assam arrive with bag full of goodies. The Satriya as well indigenous art and craft items and bamboo and cane work goods are recommended for the sheer innovativeness, creativity and the afford ability factor.| From the Planetarium explaining the planets to the nine temples devoted to these celestial bodies, Guwahati has it all. Situated on the hilltop of the Chitrasal Hill or popularly known as Navgraha Hill (the hill of Nine Planets).The nine are temples dedicated to Surya (Sun) Chandra(Moon), Chevaai/Mangal(Mars), Budhan (Mercury), Guru/Brihaspati (Jupiter), Shukra (Venus), Shani (Saturn), Rahu (Head of Demon Snake) and Ketu (Tail of Demon Snake).

Though the temples are dedicated to the Planets, enshrined in the temple are nine Shivlingas with a symbolic colour garment for every planet. The cluster of Navagraha temple was constructed in 1751. View all photos

The Nilachal Hill situated at a distance of 7 km from Guwahati is of great historical, archeological as well as religious importance. This hill believed to be a ‘Khasi’ sacrificial site earlier, now has a group of ancient temples on the top; the largely eminent of them is the Kamakhya temple. The temple of Goddess Shakti or Kamakshya is the oldest and most revered centre for Shakti worship leading to the spread of the sect Tantrik Hinduism.

It is believed that female genitalia (yoni) of dead Sati fell down while her corpse was being carried by her husband Shiva turning the hill blue, therefore the name Neelachal (Blue Spread). This 10th century temple was reconstructed after being destroyed by Muslim rulers. The famous Kaziranga National Park, located at a distance of 200 km from Guwahati, is the star attraction for tourists for its unique animal and bird mix and authentic habitat in which the tourists are permitted to catch a glimpse.

The park is spread over an area of 450 sq km and has the blessings of river Brahmaputra throughout the stretch. This World Heritage Site is renowned for breeding and habituating the one-horned rhino. The park also boasts of a rich assortment of shallow water fowls, pond herons, fishing eagles, the egrets, river terns, adjutant and the black necked storks etc.

What a sight it is to ride a tall elephant and still be covered with grass which grows taller than the elephants and watch the rhinos steer expertly away from the trained Pachyderm.

October to April is considered to be the best season and the Park shut down during monsoon (April to mid September).

About Guwahati. (2016, Dec 31). Retrieved from https://studymoose.com/about-guwahati-essay 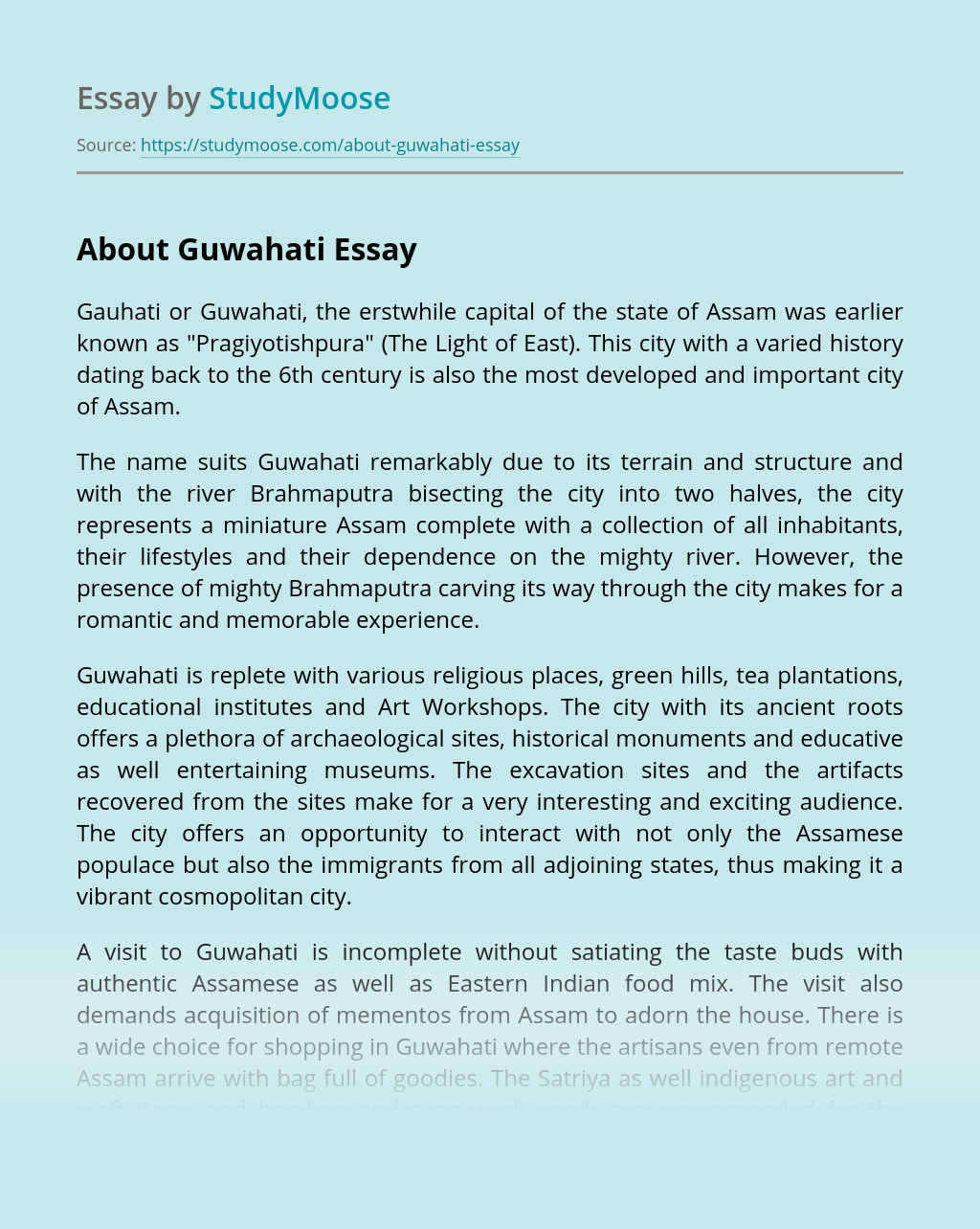 This report has been an honest and dedicated attempt to make the analysis on marketing material as authentic as it could. And I earnestly hope that it provides useful and workable information and knowledge to any person reading it. During this period, I had the pleasure of working closely with accomplished organization people who shared with... VIEW ESSAY

The Tragedy Of Oppression “Among those who dislike oppression are many who like to oppress”. These are the words that rolled off the French General Napoleon Bonaparte’s tongue. This relates to Animal Farm because all of the farm animals do not like oppression but they have a bunch of oppressors among them. The pigs control... VIEW ESSAY

In regards to the definition of religion given in The Sacred Quest, we find that due to the complexity of the term religion there are many different ways to satisfy what it actually is. It can be recognized that sacred reality indicates the characteristics of being specially distinctive; beyond human control; concerned with human welfare;... VIEW ESSAY

This story tells about a college kid (Ron) who gets a job helping handicapped kids at a summer camp. A day and a half goes by taking care of these kids, and this Ron fells like going absolutely nuts. As the days go by he starts liking them more and as he does he also... VIEW ESSAY