Danforth continues to question Francis until Proctor and Mary Warren enter to serve as proof for the court that the girls’ are frauds. “Did you not . . . sick in bed? ” Danforth is shocked and questions Mary’s presence; this also creates tension to whether to what Mary has to say will have an influence on the attempt to expose the girls. Danforth little questions Proctor about the reasons why Mary Warren was in the court. “I think you must… she “Hale suggests that he should listen to what Mary has got to say.

Don't use plagiarized sources. Get your custom essay on
“ About Danforth ”
Get custom paper
NEW! smart matching with writer

Proctor at first is Mary’s spokesman as Danforth questions such as ” what will you tell… Warren?

” were hard to contradict but then Mary picks up some courage from the people around her and answers herself with her short string of words “it were pretence sir”. This immediately builds up suspense as she speaks up and the reader is intrigued by what she has to say, and if it will sway the court.

After this, Danforth doesn’t know what to do. So he states ” indeed not . . . concealment” meaning any lies told will be condemned by the liar, Proctor declares that he understands, ” I know that sir” so Danforth in return asks a long line of questions that are again hard to answer without getting him into trouble with the court.

This creates tension as anything mis-pharased by Proctor could rise suspicion and manipulate the court. Proctor manages to answer all the questions with clear conscience until Danforth brings in a new issue.

“Mr Proctor . . . she is pregnant now”. Proctor clearly doesn’t know anything about his wife’s pregnancy with the reply of “my wife is pregnant! ” which is a complete and utter shock to him. Following this, Danforth offers this as a bribe. “We have thought . . . will you drop this charge?

” Basically, Danforth is giving Proctor the option to save his wife until she gives birth as Proctors only purpose in the court is to save his wife, which he will be doing by giving into Danforth’s bribe but only for nine months or so. The tension all the way though the questions and arguments has mounted up till this point where John has two choices, to save his wife and leave the courts business alone or to carry on the way he was going and lose his wife and friends. The audience are drawn to John at this point and don’t turn away as they no that if they so much as move they could miss an extremely important part of the play.

Proctor is taken back by the bribe and knows that he cannot leave the court having just saved his wife; he needed to expose the girls’ lies to everyone. Danforth asks him sternly if his purpose is a larger one to which Proctor admits it is. Danforth asks Proctor to explain his reasons and produce evidence for his claims. Francis Nurse then produces a petition from 91 villagers, that are good landowners or church attenders etc that are respected by fellow villagers, that say that the accused are all innocent.

Danforth is surprised by this and says he may look up these people and question them much to Francis’ horror as he had promised the people that signed it that no harm would come to them. “no old man . . . conscience” Danforth then says that no harm would come to them, if they were all in good conscience when it was signed. This shows that Danforth is being fair about the petition and that those who do good will not be harmed, he is clearly a good man and doesn’t want to hurt innocent people

Mary Warren starts crying and Danforth notices. Proctor helps Mary and quotes from the bible, ‘Do that which is good and no harm will come to thee’. ” John my . . . give him mine” Giles then tells John to hand over Giles deposition, he does so and Danforth is surprised at how well written it is. Danforth asks another set of angry questions to try and catch Giles out but Giles cleverly answers each question and statement but then he brings up that he thinks Putnam is killing his neighbours for their land.

Danforth asks for the proof and Giles says he got it from an honest man who overheard Putnam say it but Giles would not name the man, he is therefore arrested for contempt of the court. Giles is then taken away, as he is he tells John to give up because it is no use. This creates dramatic tension as wheter giles telling John to give up will have any effect on John and also whether John’s quotation from the bible will prove right in the end. At this point, the audience are in suspense and eager to see what happens in the trail.

They have got more than enough to think about with each characters circumstances and their fate. Danforth in his rage again turns his attention to Mary Warren and again Proctor is Mary’s spokesman and Hale sticks up for the innocent and tells Danforth to stop the hearing and let John come back with a lawyer. Danforth then goes into a long speech to try and justify what he is doing and to prove it is all in the name of God. Danforth reads Mary Warrens deposition and orders Cheever to bring the other girls to the court.

Danforth is now considering that this claim may be true and questions Mary again but less ruthlessly than before, gradually Mary builds up her confidence and tells the whole truth to Danforth but then some of the girls, the others weren’t in court, arrived and Mary falls back into short answers in fear. Abigail had a hold over the girls and lied to Danforth saying that ” goody Proctor… poppet” to which John declared was untrue so then Proctor and Danforth have another long convosation about Mary and the other girls doings.

Danforth then tells Mary that if she really was faking it then to fake it for him right there, she could not and as a result the tension builds because the audience and Proctor all wondering what will happen now. “it is a… wind” Abby breaks it up and starts to fake being witched by Mary, the other girls follow, Mary gets scared and tries to run out the court to which John gets extremely angry and grabs Abby and calls her a whore many times. Danforth asks him to explain his reasons for calling her this to which he replies, “I have known her”.

About Danforth. (2020, Jun 01). Retrieved from https://studymoose.com/about-danforth-essay 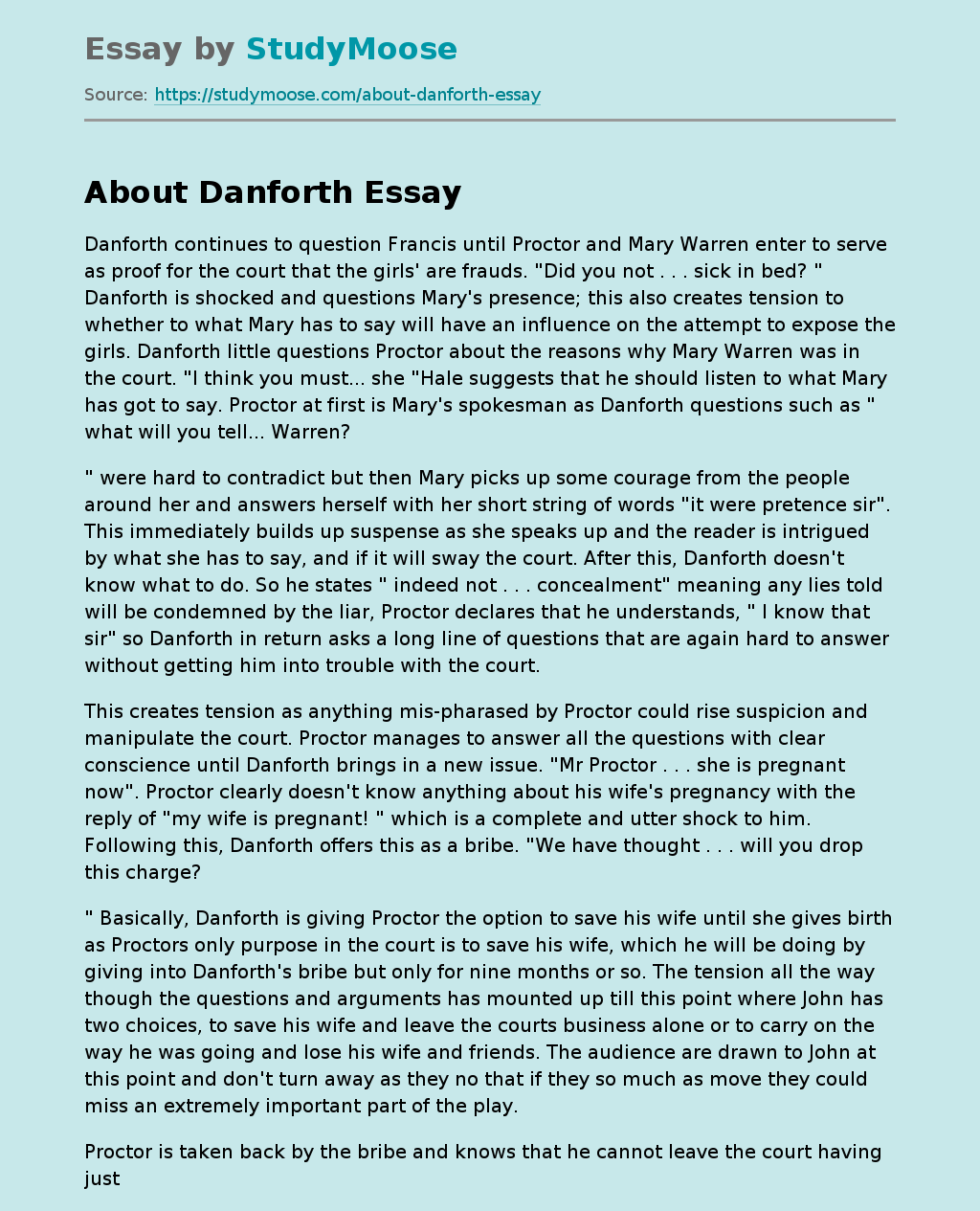