Now before I even get into this, I’m not directing this towards all Christians. I fully accept that there are Christians out there who are open-minded, sensible, kind and not ignorant. This is coming from a slightly atheistic standpoint (though sometimes I consider myself to be a Taoist or Buddhist. ) I’m really sucked into the religious part of YouTube. It’s super enlightening if you subscribe to and watch intelligent and open-minded people.

But there are always the not-so-intelligent-bordering-on-idiotic-let-alone-smart-enough-to-be-open-minded people, and they do give me a good laugh sometimes.

Don't use plagiarized sources. Get your custom essay on
“ About Christians ”
Get custom paper
NEW! smart matching with writer

Exhibit A: I saw a comment regarding homosexuality, and it said something along the lines of “homosexuality is wrong, it’s a sin, and gays will go to Hell for it. ” Obviously I’m opposed to homophobia, period, but as I read on, someone had replied and stated that they were atheistic and then proceeded to ask what sort of evidence or proof they had to back up that fact.

And his reply was that it was in the Bible. If you don’t see how stupid that answer was, read on. And even if you do, humor me. You don’t use the Bible to prove to a freaking atheist that this or that is wrong or right. Okay, you’re speaking to someone WHO DOESN’T BELIEVE IN THE BIBLE to look to to the Bible for proof. And even further, proof is SCIENTIFIC. Science involves experiment, tests, surveys, FACTS. I hate to say this, but most Christian people HAVEN’T EVEN READ THE ENTIRE BIBLE (And I’m not even blaming them for this.

It’s just that, you’d think they’d have read the bible fifteen times over since they use it in arguments so much). Knowing many Christians myself (most of them sensible to a degree), I am SURE that this is true. Most people who follow Christianity are given certain passages and excerpts to read, often taken out of context, often excluding parts. In a sense, you are paraphrasing the Bible, misquoting it, and sometimes knowingly excluding parts of it that you don’t like.

It’s all very hypocritical, and above all, I dislike hypocrites. Example for you, yes? Well, correct me if I’m wrong, but isn’t Christianity supposed to be about generosity and donations and respect and kindness? You’re supposed to love everyone except for the people who have a different sexuality? Then it’s suddenly okay to scream profanities and claim that they’re not people and deny them their rights and degrade them in public? If you don’t agree with being gay, isn’t it enough to keep it to yourself?

Especially if you are straight, and homosexuality doesn’t play a big part in your life, (because let’s face it, how many gay people have you REALLY met? ) why does it matter enough for you to go and blatantly disregard God’s wish for you to love and respect everyone (which is mentioned many times in the Bible and preached many times by Christians) and instead hate on a group of people of whom have done absolutely NO harm to you by being gay (which is mentioned only about seven brief times in the Bible)?

I can’t even take anyone who uses the Bible to defend their actions seriously these days, because while occasionally there is a good defense, most times people throw around words they hear from their parents and their church like they know exactly what they’re talking about when in actuality, they barely know their own Bible.

Because if you’re as loyal to the Bible as you imply that you are (what with all the intense hatred for something that’s only been barely mentioned seven times), you’d never divorce anyone (Mark 10:9), you’d never wear gold (1 Timothy 2:9), and you’d never mix your fabrics, just to name a few. So if you’re ever going to use the Bible as your defense against why homosexuals are wrong and whatnot, make sure you know all the other things that a “wrong” too.

About Christians. (2020, Jun 02). Retrieved from https://studymoose.com/about-christians-essay 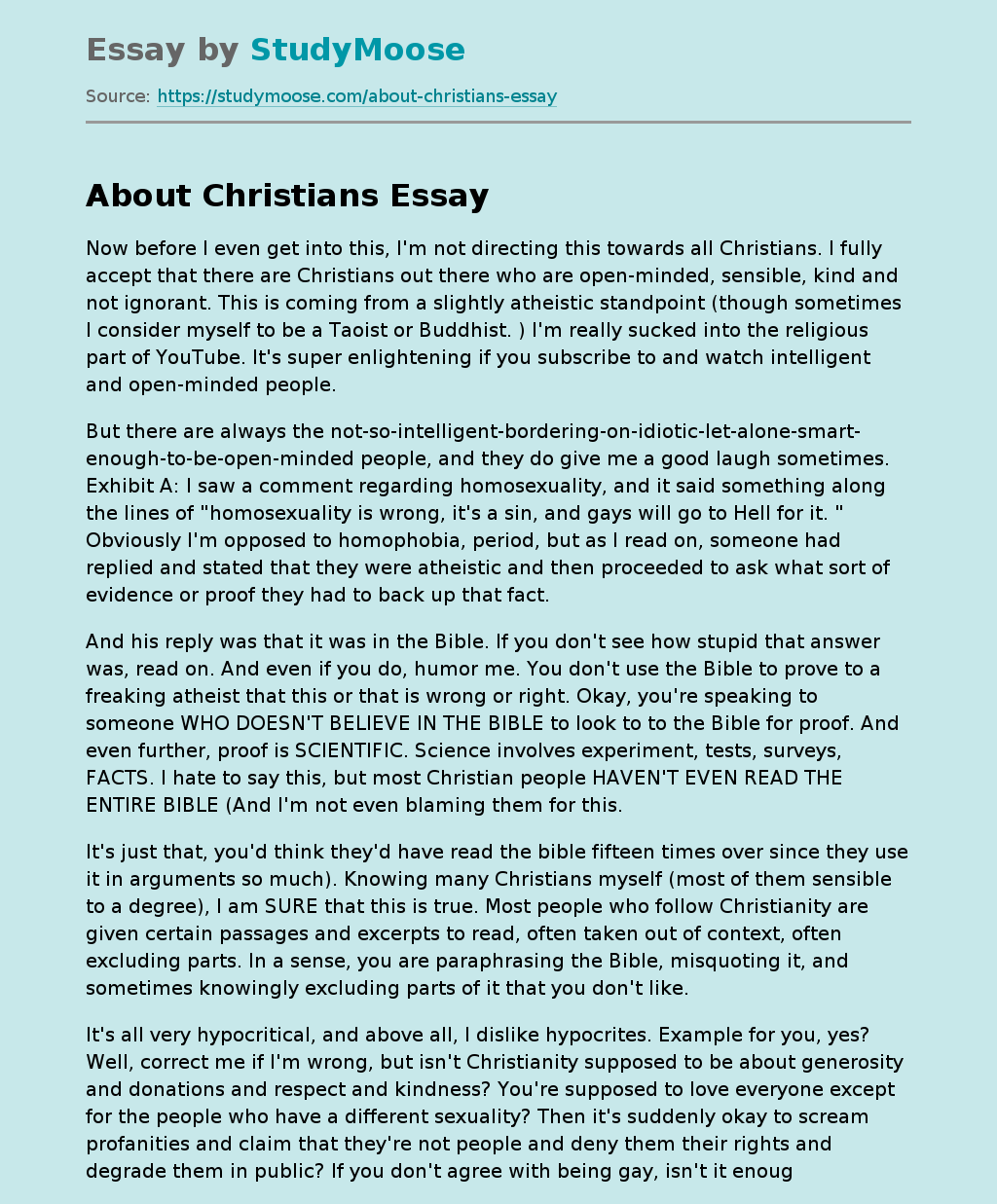