Pro-life vs. pro-choice is a nasty debate that doesn’t seem to have many

answers. There are many questions and facts to back up both sides of the

Some people say abortion is a women’s rights issue.

The issue of abortion rights is an opinionated controversy in public life. Every

person has an opinion about abortion rights, and it seems that a moral objective

has become divided into two different arenas-social issues vs.

Don't use plagiarized sources. Get your custom essay on
“ Abortion pro life vs pro choice ”
Get custom paper
NEW! smart matching with writer

with the Church and the politicians in the direct line of fire.

On one side of the abortion rights debate are the pro-life proponents. In the

United States, the position of most Christian churches is that the Church has

something to say about public life and the “good society.” The primary

involvement of the U.S. Catholic bishops in public life in the last decade focused

The movement is not flexible, and while the movement recognizes that some

women might not be ready to become mothers, pro-life supporters offer women

a chance to give up their babies or offer support services. The pro-life movement

is simple: abortion is murder and murder is bad. Pro-lifers measure life as

beginning at the moment of conception. Anything which may disrupt a

pregnancy (including birth control) is wrong.

On the surface, the pro-life movement seems to impact the reproductive rights

of women-because it does. While Roe vs. Wade 1973 allows women the right

to choose to have elective abortions, pro-life supporters believe that the law

should stop this from happening.

Pro-lifers believe that all abortions are wrong

and that every baby should have a chance to be born.

The pro-life movement gave rise in the sixties. The proponents maintain that

the fetus is alive and human. They believe that the unborn fetus is a person and

physically independent, and as a person, the fetus has human rights. Pro-life

believers agree that killing an unborn fetus is murder.

There appears to be a competition between the U.S. Catholic and American

politics. The bishops describe abortion and euthanasia as pre-eminent threats

to human dignity because they directly attack life itself. The bishops declare that

killing an unborn child is evil and to make such an evil action legal is wrong.

Their opposition to legal abortion is the primary social issue.

wrong, it is murder. Pro-lifers argue for the rights of unborn fetuses. Catholic

moral teaching is based on the dignity of the human person, and the principles

to be politically correct and morally right. Pro-life and pro-choice are terms of

political framing. The Catholic Church does not give women a personal choice in

the abortion issue. Abortion is murder and pro-life is anti-abortion. The end

result could possibly be that the U.S. bishops and the American politicians will

both win their side of the controversy at hand: the social issue and the religious

In the argument for pro-choice, those who want women to have the choice

whether or not to have an abortion, the debate does not discuss whether life

begins at fertilization. The argument in pro-choice is not necessarily that all

whether or not to have one. Pro-choice is a middle ground; anti-choice is forced

between a woman and her doctor.

Pro-choice is not pro-abortion. Supporters include those who are personally

against abortion, but who do not impose their viewpoint on all women. The

the right of women to decide for themselves.

The pro-choice believers support and work towards preventing unwanted

youth, and ensuring that families have the necessary resources to raise healthy

procedures. They must allow a woman to view the embryo, inform her if there

are twins, and provide fetal development photos. All women are counseled on

birth control, and counselors offer non-judgmental options to the women.

visit an abortion clinic, yet 1 to 5% change their minds after counseling.

Clinic counselors clear up women’s anxieties and fears about abortion. An

anti-abortion picketer saves in a lifetime.

protecting and respecting women’s rights, their moral autonomy, and their

choices. They want every woman to be willing and every child to be wanted.

Pro-woman, pro-child, pro-family, and pro-life in the true sense of that term.

The movement struggles alone in efforts to decrease the need for abortions.

for women BECAUSE LAWS AGAINST ABORTION DON’T STOP ABORTION.

In my opinion, the moral issue has been transferred from Church to “state.”

Pro-life is a struggle between what is politically correct and morality. Both the

an action legal is wrong. The Church interprets abortion as killing and teaches

that killing is a mortal sin. I question where the interpretation comes from: the

Bible? The Ten Commandments? The Vatican? The Church thinks that

abortion is a threat to human dignity because it directly attacks life itself. The

opposition to legal abortion. They are saying that the act of making an abortion

legal is wrong. It’s almost like blaming the lawmakers for the sin of abortion.

Then, they want the law to enforce their teachings.

abortion, it’s who is legally responsible for her decision and the outcome. A

woman should have the rightful freedom to believe what she wants to believe,

and her sin (if it is a sin), is between her and God-not the Church, and not the

law. The Church does not give women a personal choice in the abortion choice,

therefore, they are taking away their fundamental human rights.

I am not going to debate whether pro-life issues are correct or false, but

rather, try to understand what pro-life is, what it means, and why it’s still being

argued as the right way. On the other hand, the pro-choice movement is an

pregnancy. If abortion is not legal, women will return to illegal unsafe abortions.

body, and at the same time, I support the teachings of the Catholic Church that

abortion is morally wrong. Abortion is a moral choice for any woman wishing to

control her body-and this should be a certain unalienable right.

abortion, I would need to ask myself the following questions:

-Is the fetus alive? Of course. It’s a biological mechanism-a genesis of

new life. But it does not have human rights-including the right to be

aborted during its gestation.

-Is it human? Yes-a human being in an early stage of development-not

-Is it a person? No-just a potential person.

-Is it physically independent? No-absolutely dependent on another human

being for its continued existence.

-Does it have human rights? Yes and no. Not before birth.

-Is abortion murder? No-it’s not an independent person.

While I support the teachings of the Church, I believe that a women should

have the right to choose what to do with her body. The pro-choice movement

wants every woman to be willing and every child to be wanted. Pro-woman,

pro-child, pro-family, and pro-life in the true sense of that term. No one has the

right answer, but no one has the wrong answer either. Although the woman

always has the right to choose, the pro-life movement makes some good points

any scared and single mother might want to consider.

As for my feelings, I believe that abortion is a private issue-an issue that

should be between a woman and God. I believe the Church’s teaching that God

gave me free will to make my own decisions. I think that the pro-choice

movement struggles alone in its efforts to decrease the need for abortion. Legal

AGAINST ABORTION DON’T STOP ABORTION. Pro-life vs. pro-choice is a

vicious debate that doesn’t seem to have many answers. Some people say

abortion is a women’s rights issue. Other people say it’s an issue of morality,

and still other an issue of just being “right.” 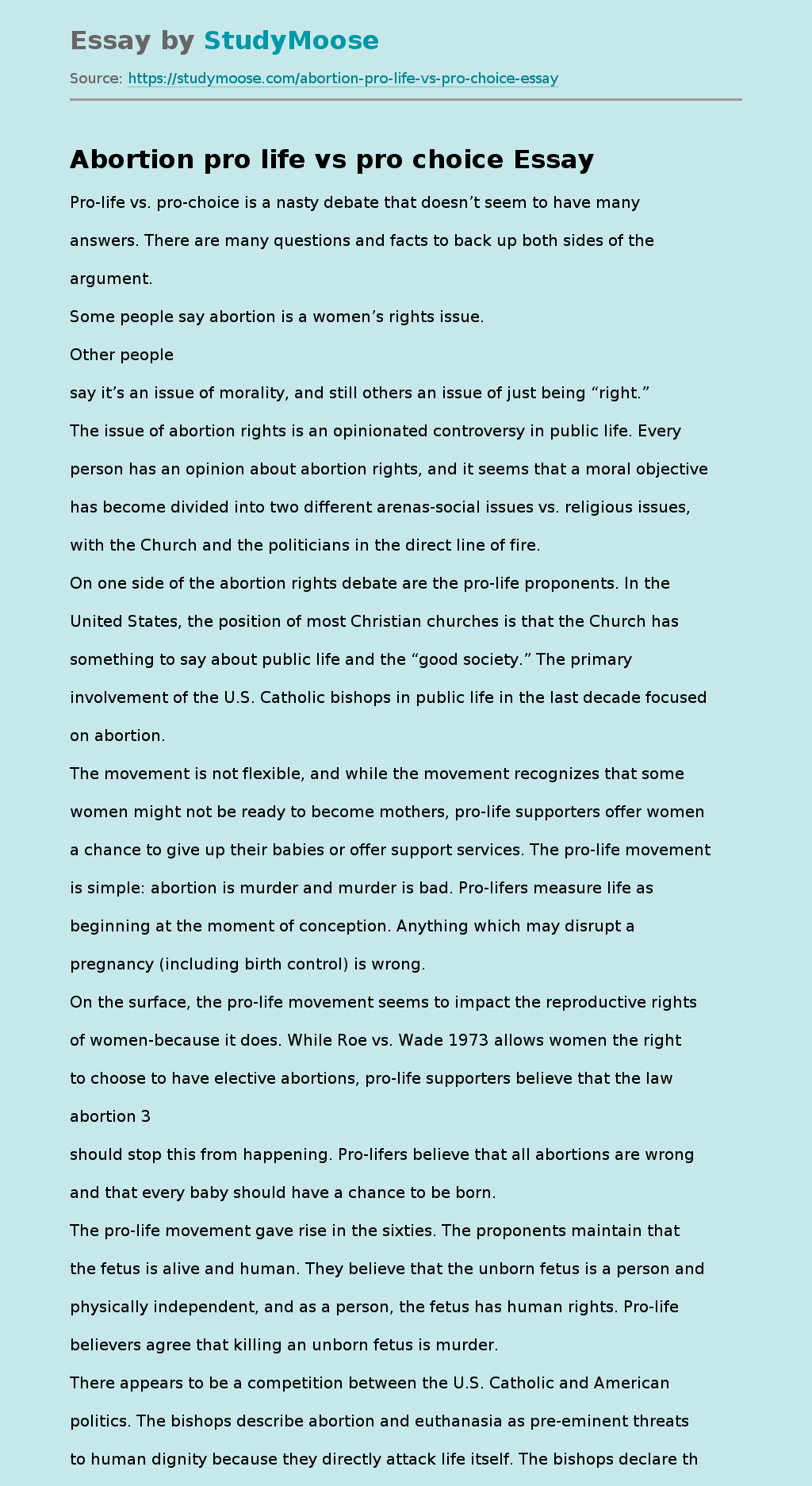