The subject of teenage abortion, is an emotionally charged one. The two major groups are completely opposite in their beliefs. Rather then discuss the emotional views of those groups, I have chosen to research, write, and conclude based on factual material, concerning teenage abortion. A discussion of abortion as a definition is explained medically, and in a small part the emotional effects on the participant. I have chosen to report in a factual not an emotional manner. The direct definition of abortion is the termination of a pregnancy by loss or destruction of the fetus before birth.

Don't use plagiarized sources. Get your custom essay on
“ Abortion Among Teenagers ”
Get custom paper
NEW! smart matching with writer

(“Abortion”) There are two types of abortion, spontaneous and induced. Spontaneous abortion occurs in the first trimester (first three months) of a pregnancy. This type of abortion is more commonly known as a miscarriage. “Miscarriages are usually attributed to an abnormality to the fetus.” Induced is the other type of abortion, the one creating a wide spread controversy throughout the United States and many other parts of the world.

Induced abortion is a procedure intended to terminate a suspected or known unwanted pregnancy. The fetus is forced out of the uterus causing it to die. There are only a few different ways that an induced abortion is performed. The most common technique is known as vacuum aspiration. During the procedure the embryo or the fetus and the placenta is drawn into a tube by vacuum pressure. Vacuum aspiration along with the other methods of abortion, are usually performed in the first trimester.

The procedure for second trimester abortion is a more risky and complicated procedure. Thirty six percent of all teenage women who become pregnant choose to terminate their pregnancies by having abortions. There are many reasons why teenagers decide that abortion is the best option for their own specific situations. “Some say they aren’t ready for the kind of changes a baby would bring to their lives.”

The top three reasons, teens and grown women alike, choose to have an abortion are: 1. A child would change the lives of all involved, drastically, in ways that many are not ready to handle. 2. A feeling of immaturity. 3. Financial problems, only to be made worse if a youngster was involved.(Planned) Along with not being able to afford the price of raising a heir, the medical bills that come from bringing a baby into the world are also quite substantial. Although abortion is rather costly procedure, it is far less then the long-term price of supporting a child. Most teenagers are just not old enough, mentally or physically, to take care of and maintain a genuine home for a growing child. For many teens, having an abortion is a way to get on with their lives.

A chance to forget the past and create a pathway to the future.The entire concept of abortion may cause an abundance of internal conflict but, for an adolescent this procedure may very well be the best alternative. For a countless number of pregnant teenagers, the notion of having an abortion is not brought on by themselves. Although the decision is a difficult one on its own parents and boyfriends, most likely, will not help to make the process any easier. The pressure from others put on pregnant adolescents could force them into making serious decisions of having abortions, with little or no thought what so ever. Abortions might also be chosen to hide the pregnancy from the people who care most. The procedure, in many cases, is completed before either parent of the girl is informed. Having an abortion is a common procedure in this day and age however, some risks are involved, though the majority can be avoided.

Abortion is expensive, if it is unaffordable, many girls may result to having it performed illegally. Through the 1980’s forty to sixty million abortions were performed but, thirty-three million were competed illegally. If this situation occurs, the operation could be carried out by a person with little or no medical training in an unsensitized room with unsterilized instruments “Many women who went to illegal abortionists became very sick or died.”Even when an abortion is performed legally and safely it still has its risks. Induced abortions can cause complications such as: miscarriage, low birth weight, and pre-term delivery with future pregnancies. Other risks occur when the abortion is put off for any reason.

The longer the wait, the more complicated the procedure becomes. “Of all the abortion-related policy issues facing decision makers in this country today, parental consent or notification before a minor may have an abortion is perhaps the most difficult As of 1991 forty-one states have enacted laws, to involve the parents of all pregnant young women, in the decision making process, when abortion is an option to explore. (“Teenagers”) Some states even require both parents to be notified. (“Teenagers) In these states the realities of the teenagers’ lives are ignored. (“Teenagers”) Enforced parental involvement may abstain pregnant teens from the proper medical care needed. (Planned) Delaying abortion to find the young woman’s parents, if their whereabouts are unknown, could cause many physical and emotional health risks for her. (Planned)

If the physician is required to locate the parents personally, then the cost and complications of the procedure will be increased. (Planned) Although most teens would benefit from adult guidance when faced with an unwanted pregnancy. (“Teenagers”) A hand full of these teens are unfortunate and can not go to them due to parental physical or psychiatric illness and/or drug and alcohol abuse. (Planned) Many are also frightened of what might be said and done to them. “There is evidence that teenagers who do not involve their parents believe, that involving their parents would not be in their best interests or are trying to protect their parents.” (Planned) A strong majority of the teens having abortions already involve parents even if not required to do so by law. (Planned)

Allowing teenage girls to have abortions is allowing them to go on with their lives. To pursue the many hopes and dreams of their childhood. It is allowing them to continue to be a child instead of raising one. As for the entire subject of teenage abortion, I am absolutely 100% pro-choice. I believe any women, young or old should have the right to choose, without legal strings attached. I would suggest a process of guidance be made available, should a women so choose. My thoughts are, an adult, maybe not a parent, but a person of legal age, should be available to give guidance because they care, not because they are bound to do so by law. In conclusion I do not believe Government should intrude in such personal matters. 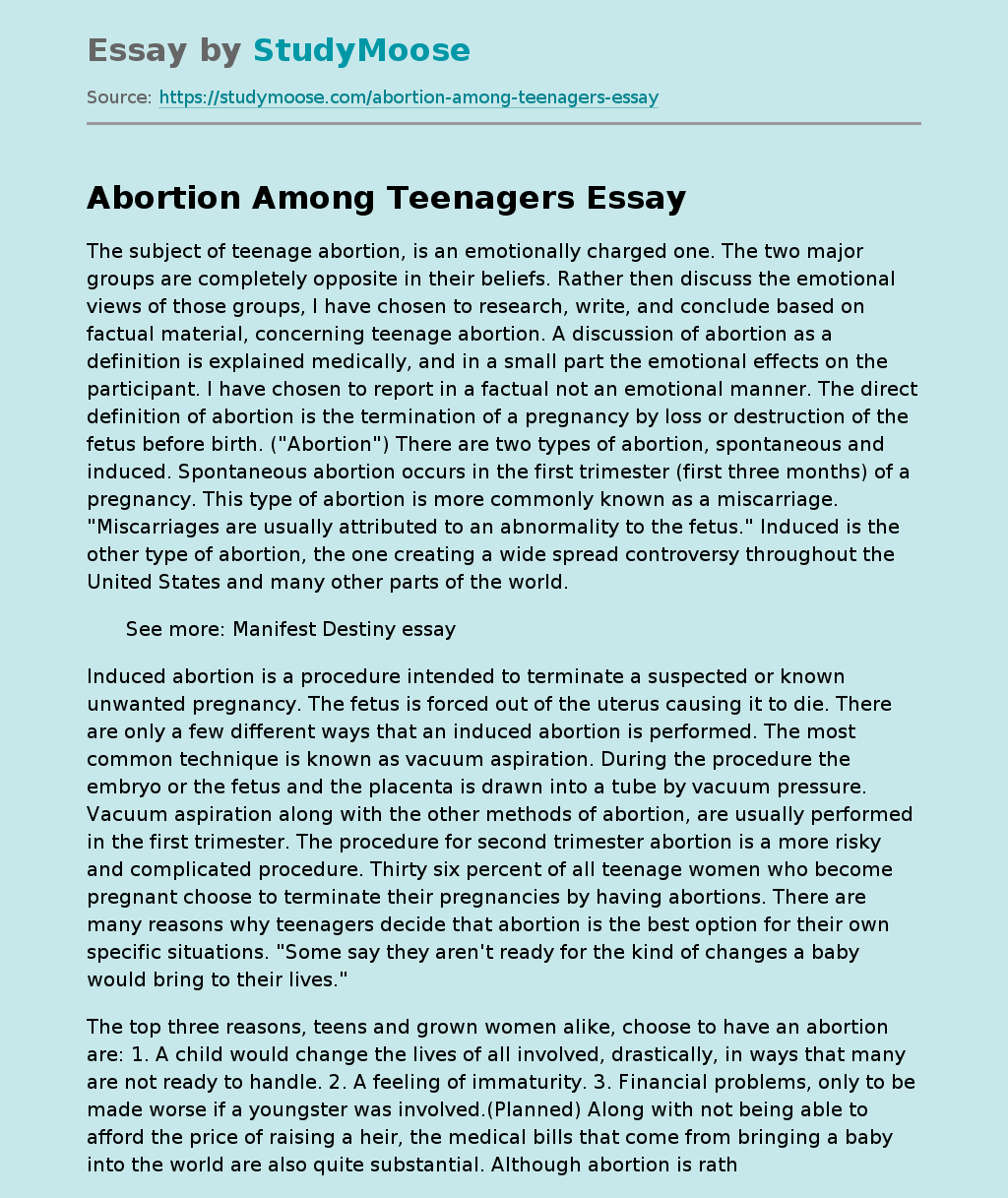