According to one of the Holy Books, the Bible, when God created the first man and woman, He knew as the author and finisher of man that he has mind, a conscience which is 2-sided. It could be destructive or constructive, it could embrace good or shun evil, it could love or hate based on the outline that he knows what is wrong and or right. That was the basic reason why God warned them or gave a strict Law against the act that lead to the very first sin, which is the eating of the fruit of knowledge.

Don't use plagiarized sources. Get your custom essay on
“ A world without Law would be a world without Sin ”
Get custom paper
NEW! smart matching with writer

Hence, if there wasn’t any Law, the first and subsequent sins wouldn’t have existed.

A car, an example of mechanical robot, will have no idea why it was created, which is a reason why a manual will be attached to it by the manufacturer for the use of the possible user[s]. We are all created for a purpose but the significant difference between Man and Machine is the choice and will power.

These two tools can be shaped with Law[s] to guide man from being a weapon of personal and group calamity. And when there is no Law[s], then man can do whatever and anything he likes to suit his personal desire at the expense of others which would mean “No-Sin”.

…At his best, man is the noblest of all animals; separated from law and justice he is the worst. —- Aristotle It can be said man would be reckless, irresponsible, wild, thoughtless, uncontrolled or careless in a world without law.

He would be pitiless when the taste for pleasure clouds his sense of reasoning. The mentality that anything he does is not wrong; just-do-it lingers in the mind of man in a world without Laws because there will not be any form of punishment.

It would be a world of no hope for the poor. Government which is supposed to organize the society would not be in existence; there would not be anything like the Legislature to make laws, Executive to administer the laws and Judiciary to interpret the laws. Since the germane objective of Law is to maintain order in a society, the government agencies to carry out crime investigations and the professionals called Lawyers would have no space in a world without laws.

Therefore, there will be a paradigm shift where jungle justice takes over the expected capacity of law. Discoveries and inventions will set the world in a state of entropy. Classified experiments such as cloning, stem cell growth and Nuclear weapons would know no limit. The world would be overpopulated for their will not be birth control regulations; strange diseases would be epidemic and pandemic. I can conveniently conclude that the world will fall apart without the law [which is tantamount to a world without sin]. 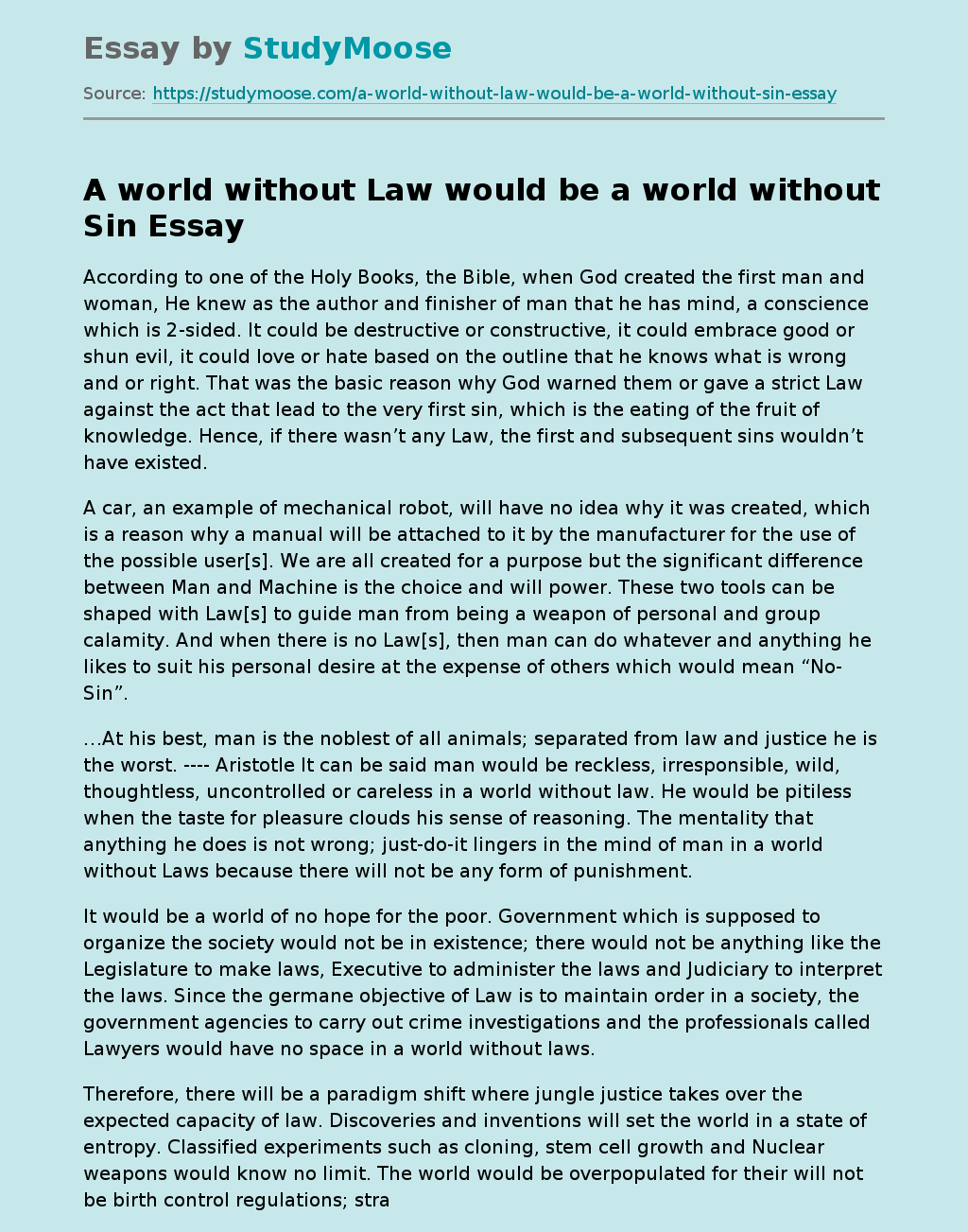