A Visit to a Museum of The Tower

The Tower of London is the oldest and probably the most famous historical building in Europe. The Tower of London was started in 1066 by its founder, William the Conqueror. It was built to serve as a fortress, a prison, and a symbol of power. The Tower began as a simple enclosure made out of timber and stone with a ditch and palisade along the north and west sides. A huge stone structure, which is now known as The White Tower, was then added to this enclosure.

Don't use plagiarized sources. Get your custom essay on
“ A Visit to a Museum of The Tower ”
Get custom paper
NEW! smart matching with writer

Around 1240, King Henry III widened the grounds to include a church, a great hall, and other buildings.

Proficient in: A Visit To A Museum

Since it was built in 1078, the White Tower has been used as a prison, a storehouse, and a museum. Until recently it was home to the national collection of arms and armour that belong to the Royal Armouries.

The Tower of London is also home to the Royal Crown Jewels. The Crown Jewels are the personal property of the sovereign. Although the Coronation Regalia were held at Westminster Abbey, most of the jewels were kept at the Tower since that was the sovereign’s residence.

After some of the jewels were stolen from Westminster Abbey in 1303, the Tower of London became the permanent home to the Royal Jewels. In 1603, King James I ordered that the jewels be kept in the Tower Jewel House, and be put on display for the Tower visitors.

No one knows the actual value of the jewels, but they are obviously priceless artifacts. Today the Crown Jewels are heavily guarded and it would be almost impossible to steal them; however in 1671, when security was not high, a man named Thomas Blood managed to steal the king’s crown, an orb, and a sceptre. Thomas Blood was caught near the main gate with the stolen jewels before he could get away. Surprisingly, Blood was not punished; he was granted pardon and was awarded a pension.

Not all traitors got off so easily though. The Tower of London has seen hundreds of prisoners over the years. The Tower held many famous prisoners, including: Lady Jane Grey, Anne Boleyn, and Sir Walter Raleigh. Most of the prisoners were killed at Tower Hill rather than at the tower itself. The nobler prisoners were beheaded, while the lower classmen were killed by hanging, drawing, and quartering. It is said that the ghosts of some of the prisoners can be seen wandering around the Tower.

Ever since the Tower of London was built, it has been guarded by men known as the Yeoman Warders. The Yeoman Warders stood watch over the buildings and its inhabitants. Over the years, their uniform has seen many changes. In the early years, the Warders dressed in regular civilian clothes. In 1550, they asked for the right to wear the same Royal Livery as the members of the King’s Body Guard. The Royal Livery is now only worn on special occasions, such as the annual church parades. Their present blue uniform was introduced in 1858.

The Yeoman Warders patrol the gates with a sword and partizan. For many years, when the Warders were appointed it was usually for life. The current Warders are ordered to retire at 65. As part of their duty, the Warders are required to live on the Tower grounds. They live there with their families in a small community that is inaccessible to the public. The Yeoman Warders are perhaps the only ones who truly know all the mysteries of the Tower of London.

The Tower of London is one of the oldest buildings in England. For over 900 years, it has been continually improved upon by adding more towers, buildings, and walkways. It has served the purpose of castle, fortress, prison, and now a museum.

When I visit the Tower of London, there are several important things I would like to see. The main thing I want to do is visit the White Tower and see where the weapons are kept. I would also like to see where the prisoners stayed because I heard that sometimes you can still see or feel their spirits wandering around the Tower. I think it would be interesting to hear some of the Yeoman Warders stories too. The Tower of London is probably going to be one of my favorite places to visit on this trip because not only can you see it’s history, but you can also feel it

A Visit to a Museum of The Tower. (2016, Jul 06). Retrieved from https://studymoose.com/a-visit-to-a-museum-of-the-tower-essay 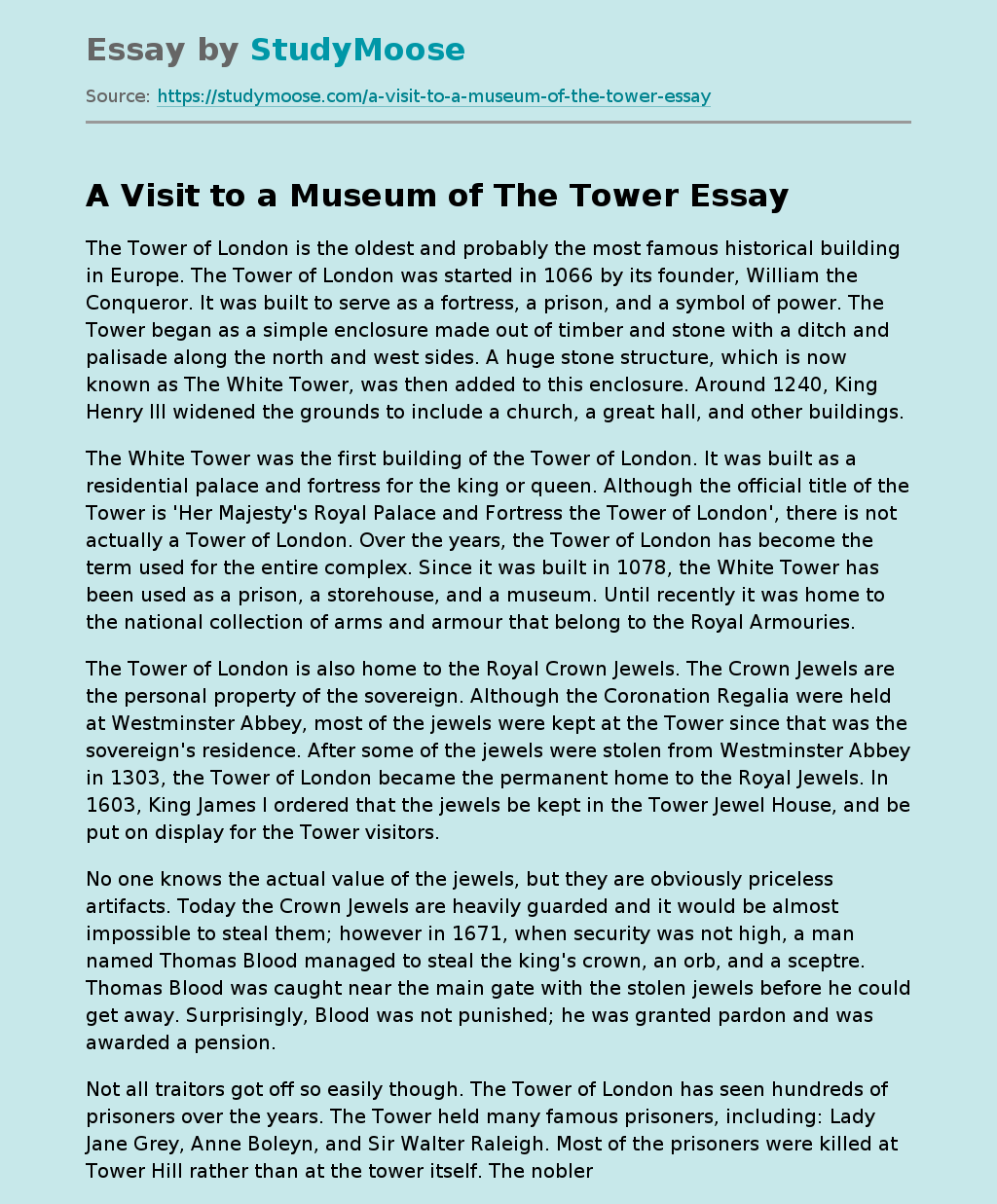