A Very Indian Poem in English

Nissim Ezekiel is one of those Indian poets writing in English who creates an authentic flavor of India, by his use of Indian English – Pidgin English on Bazar English, as it is often called. In this poem, the Indian flavor has been created by stressing the various mistakes which Indians commit in their use of English, by bringing in the hopes and aspirations of free India, and also the attitudes of her two hostile neighbors, China and Pakistan.

Poetic Inspiration for the Poem:

It all started as a comment by a friend who said that you write in English no doubt and you write English well but you don’t seem to even know or realise that thousands of Indians speak what can only be called Indian English, So from that time in all his train journeys from Mithibai College back home, he started to take some interest in the way English was being spoken on the train.

Don't use plagiarized sources. Get your custom essay on
“ A Very Indian Poem in English ”
Get custom paper
NEW! smart matching with writer

Every time he heard an obvious Indian English phrase like, “I’m not knowing only.

” he would take it down. When he had about a thousand of these, he thought of creating this present poem.

Ezekiel presents that the new generation is going after ‘fashion and foreign things.’ He presents the typical Indian make – up. The Indian living conditions are sought to be portrayed. The India of yester years is no longer to be seen here, as modernization and industrialization have speeded up the process of change.

The regrettable thing in the modern world is the act of violence and anti – social tendencies proving to be a menace.

Still the positive aspects like regeneration, remuneration and contraception could be thought of as a way out of the present muddle. One can certainly hope for the better and propagate the best that is thought as unique.

In the second stanza, the readers get a peep into things – Indians as Gandhi’s heir, he would opt for peace and non – violence. He is puzzled why others are not following Gandhi’s advice – while in this estimate, the ancient Indian wisdom is correct, contrastively the modern generation takes it to whatever is western and fashionable – like other Indians, he too has to improve his English language. The student interest and petty agitations make him feel sickening line Antony’s appeal to the Roman mob, he will call upon the fellow citizens to think of the past masters.

Thus in the third stanza, he pronounces, In order to get away from that which is disgusting, he wants to have a cup of wine which is very good for digestion. It can be taken as equivalent to the western wine if only a little salt is added to make it a lovely drink. The poet confesses that he is the total abstainer from drinks while it is taken by addicts to gunch themselves, he for his part would turn to simple drinks like lassi. Thus, the poet tries to receive the old Gandhian days.

In the fourth stanza, the poet is able to think aloud and offer his comments on the world situation today. The present conditions all over the world speak of a bad trend that give an edge to the production of dangerous weapons and try to be superior to others. The countries of the world often tie with each other in keeping themselves ahead of others in this mad competitive world. This retrace often leads to conflicts resulting in loss of precious human lives. If only one considers the other as the brother; the trend could be changed.

India is a land where the principle of ‘unity in Diversity’ is practiced. Here many communities live together even though there are some problems. This ideal situation in which one Co-exists with the other is described as Ram Rajya by the poet. He gives the hand of friendliness to the visitor and expects him to come again. The poet is optimistic when he says that he enjoys every moment of good company. So, he ends the poem by saying that he does not feel the necessity of celebrating ceremonies.

Common Mistakes ‘highlighted’ in the Poem:

Substrate influence on grammar is quite common. It is often frowned upon as “wrong”, but eventually becomes a regular part of the new language variant. “The Patriot” contains a number of Indian English examples: the reduplication of verbs in “fighting fighting”, the lack of indefinite and definite articles in “threw stone at Indirabehn” and “all people of world”, the use of one instead of the indefinite article a in “one glass lassi”, the excessive use of the definite article the in “not that I am ever tasting the wine”, the excessive use of the continuous tense (the -ing form) in “I am standing for peace and non-violence”, the omission of an obligatory object pronoun in “modern generation is neglecting” (instead of “neglecting this”) etc. Again, this is a satirical poem rather than a genuine example of Indian English, but the phenomena exemplified are genuine enough.

Nissim Ezekiel occupies a unique position among Indo-Anglian poets of post-Independence era. Nissim opposed the idealism and romanticism of the earlier group of Indian writers in English, and tried to look at any typical Indian situation with an Indian attitude, with a novel and dynamic Indian insight. He cleverly manipulated Indian English to bring out the Indian worldview.

A Very Indian Poem in English. (2016, Nov 13). Retrieved from https://studymoose.com/a-very-indian-poem-in-english-essay 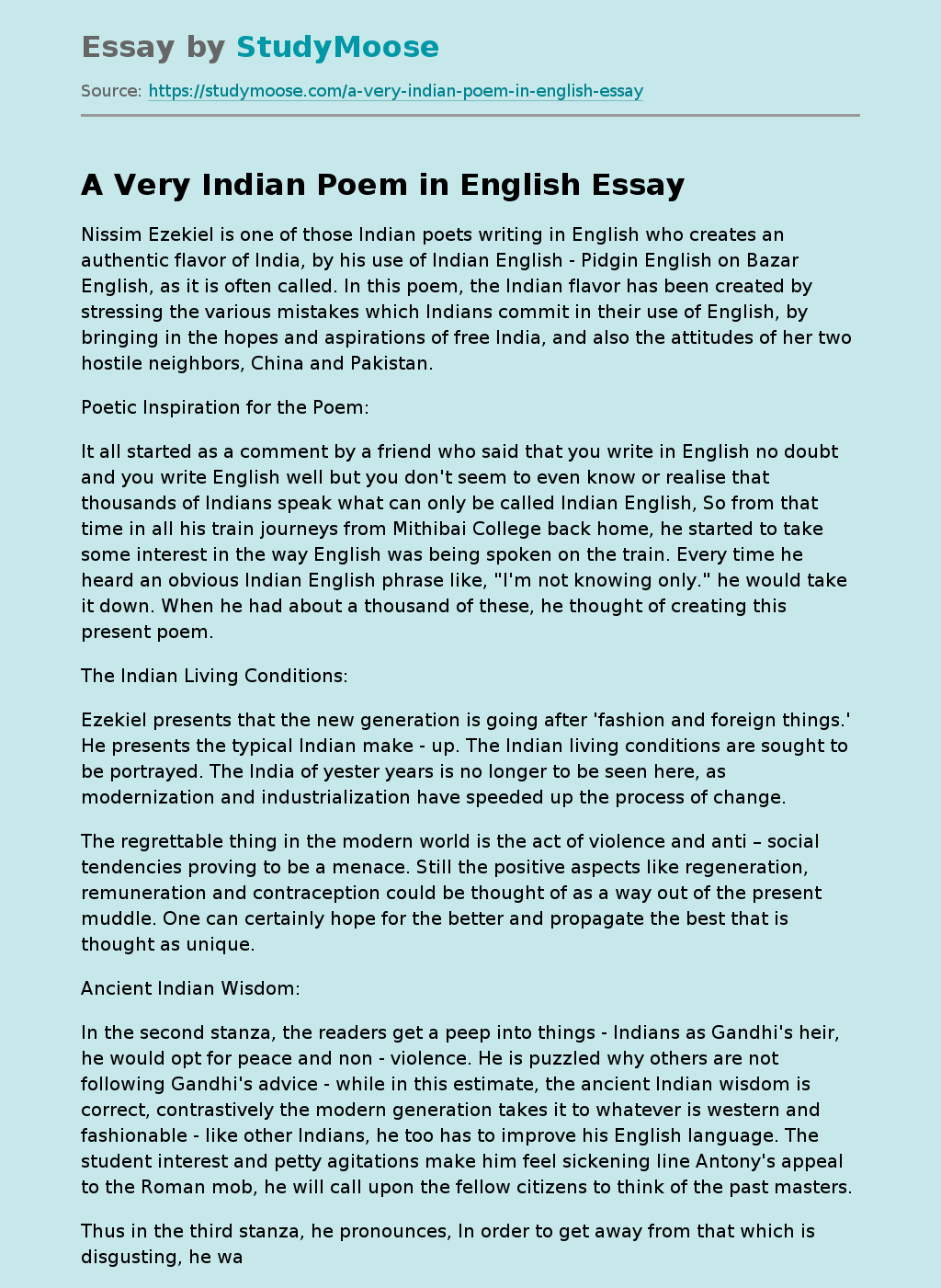