The Black-Figure Neck Amphora was attributed to the Affecter in Athens, Greece about 530 B. C. , made of terracotta, with dimension of 5 ? x 10 1/8 inches (The Getty, On-line) This amphora, which used to hold wine and water in ancient times, was found in a Southern Italy grave site but because of its distinctive figures and style, it was regarded as one of Athenian masterpieces. Like most artists, the real name of Affecter is unknown but he left a style of his own.

In those years, he worked as potter and vase painter and may have learned his craft from the Amasis Painter, but deviate his approach in the conventional way of potting and painting.

Turn in your highest-quality paper
Get a qualified writer to help you with
“ A Timeless Art ”
Get high-quality paper
NEW! AI matching with writer

During the times when Athenian vase-painters emphasized on the narrative content of their work, the Affecter focused on purely decorative aspects that suit the Etruscan artistic taste. (The Getty On-line). The amphora was molded on a pottery wheel and dried.

The maker painted on a glaze and carved designs on its surface and used the red-figure painting method, wherein, after it was fired in a wood furnace, the glaze turned to black and covered the amphora in glaze then erasing parts of it to create finer details.

(St. Petersburg Times, On-line) The portrayal of the vase is bizarre but remarkable for Athenian potter of that time. Like any others Athenian masterpieces, this vase is made of attic clay with distinguished red and black color.

For years, historians never decipher the narrative story behind its illustrated body but this suits the style of the Affecter who concentrated on ornamental look rather than history behind its times.

The vase, though, shows Herakles, now known as Hercules, waving his club, pursuing a centaur, a mythological half horse half human figure. At the back of the vase, Theseus combats with Minotaur. The Affecter also used the old fashioned neck amphora form wherein the neck is highly defined as Protoattic and ovoid in shape (The Beazley Archive On-line).

The Affecter modified the vessel, separating the neck and the body by raised rings. Ancient and old fashioned as it is, the Black Figure Neck Amphora is extraordinary with timeless beauty. Its exquisiteness lies on its color and creativity. It is a major consideration that out of clay, two colors will distinguish amphora like this, red and black. And with poise and commitment, the Affecter gave justice to its craft.

Using both old fashioned style in creating amphora and adding touch of its modern days, evidenced by adding rings on it, the Affecter is not confined with the conventional way but used his imaginations and skills to enhance its designs. The maker, giving emphasis with Herkales and Theseus greatness rather than detailed information of their winnings over battles with barbarians, is a magnificent touch of this artistic craft. It only shows patriotism more than one time glory. It depicts the maker’s love to its civilization and commemorates it with his trade. 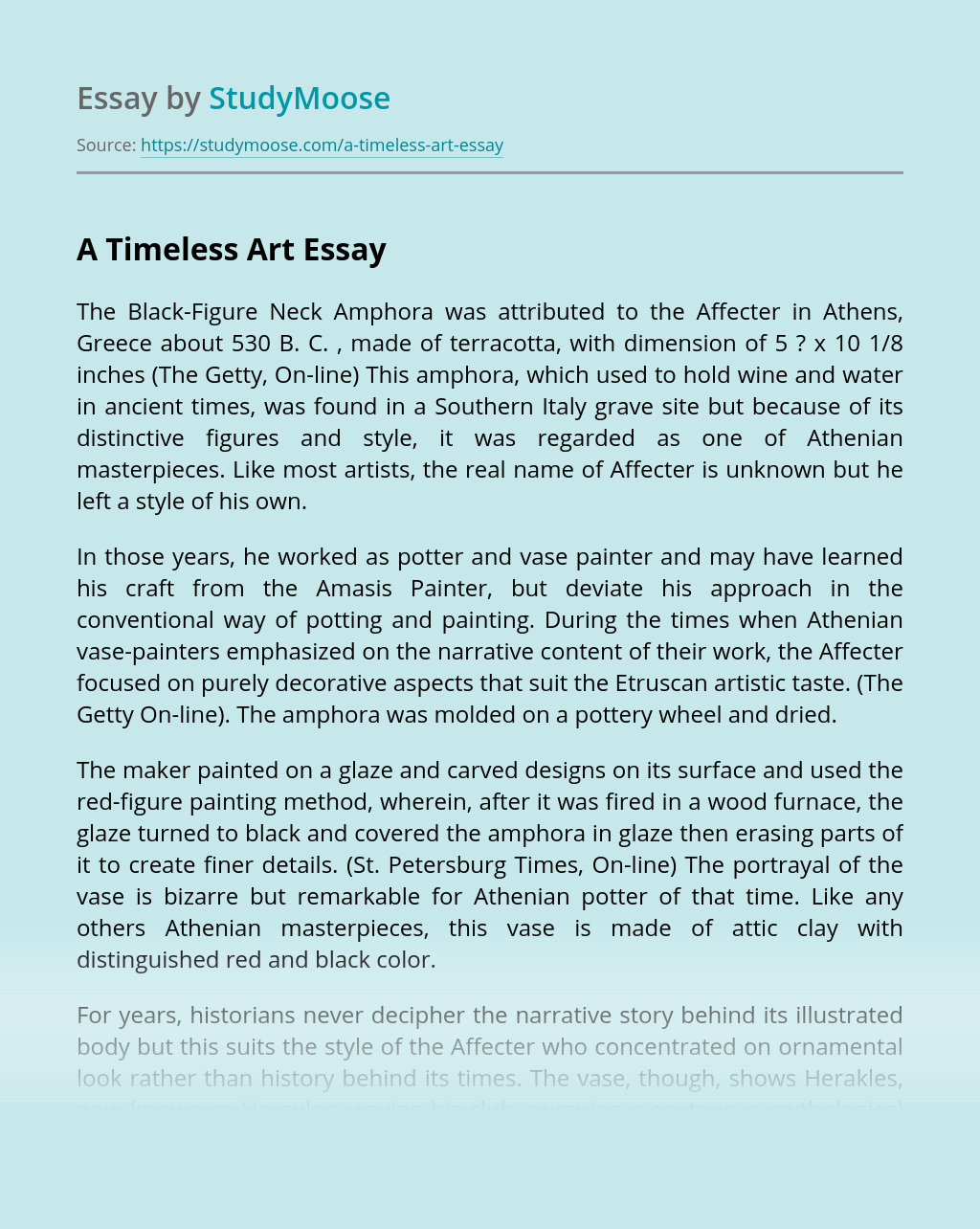 Turn in your highest-quality paper
Get a qualified writer to help you with
“ A Timeless Art ”
Get high-quality paper
Helping students since 2015
Stay Safe, Stay Original