A Thousand Acres vs. King Lear

After watching both films, A Thousand Acres made in 2007 starring Michelle Pfeiffer, Jessica Lange and Jason Robards and King Lear made in 2008 starring Ian McKellen, Frances Barber and Kieran Bew, I decidedly liked A Thousand Acres much better. Mostly for it’s acting, and the modernism of the story line. (Although, a King Lear re-make is in production currently and will star Al Pacino as King Lear, so my opinion is subject to change.)

There are many similarities between the two movies.

Don't use plagiarized sources. Get your custom essay on
“ A Thousand Acres vs. King Lear ”
Get custom paper
NEW! smart matching with writer

Both movies have a father with three daughters, whom are trying to leave something to them. Larry Cook is deciding how to split his land amongst his daughters, where as King Lear is deciding how to split his kingdom amongst his three daughters. Larry, is Lear. Ginny is Goneral, Rose is Regan and the favourite and youngest daughters, Caroline is Cordelia. Harold Clark, a family friend of Larry, is the portrayal of the Earl of Gloucester, King Lears friend.

His two sons are Edgar and Edmund, and Harold’s two son’s are Loren and Jess.

Though there is a lacking of the comical aspect in A Thousand Acres, that is put in King Lear, the story lines are still very similar. The viewpoint is similar – coming from the eldest daughter Ginny(A Thousand Acres) and the eldest daughter Goneril(King Lear.) King Lear – divides his kingdom amongst his daughters based on who loves him the most, Larry gives the largest portion of his land to the most loving daughter as well.

In each family and storyline, the youngest daughter rebels against their father and ends up leaving, getting nothing from their father. After each father gives up their power/land, they both go mental without it, and both end up in horrible situations that end up with their youngest (and previously most favoured) daughter coming to the rescue.

Though there are many similarities, the movies differ in many, many ways. For example: Ginny brings up the fact her father molested her aswell as her sister Rose, where as Goneril feels nothing but love and admiration for her father. The love is portrayed more innocent and wholesome. Ginny shows how you could hate her father, for the fact he molested her as a child. King Lear is told from a male perspective, Shakespeare didn’t have a female mentality especially not back in that age, not portrayed atleast in this movie. A Thousand Acres is written by a female, and this is why there is a different, more twisted perspective. A female view as well as a males, as she wrote it later on mirroring this novel, she got to put her own ‘two cents’ in.

King Lear is a changed man at the end of the movie. He goes from being a horrible tyrant, to a changed man. Larry? Not so much. He remains a dispicable man, solely caring about his possessions, power and money, who’s attitudes and beliefs never change. Because of the fact that the movies are in two different perspectives, they have different themes. Though both hold a theme about the abuse of power, and a theme of abusive family relationships, as well as father daughter relationships – they differ in what the main themes are. A Thousand Acres is about living life to it’s fullest and for yourself, where as, the main theme of King Lear is family and power.

Another difference is the fact the town thought that the daughters of Larry were cruel to him, where in fact they weren’t. He was respected by his town. King Lear was also a very respected ruler of his lands. However, nobody suspects King Lear’s daughter’s of being cruel to him.

A Thousand Acres vs. King Lear. (2016, Oct 01). Retrieved from https://studymoose.com/a-thousand-acres-vs-king-lear-essay 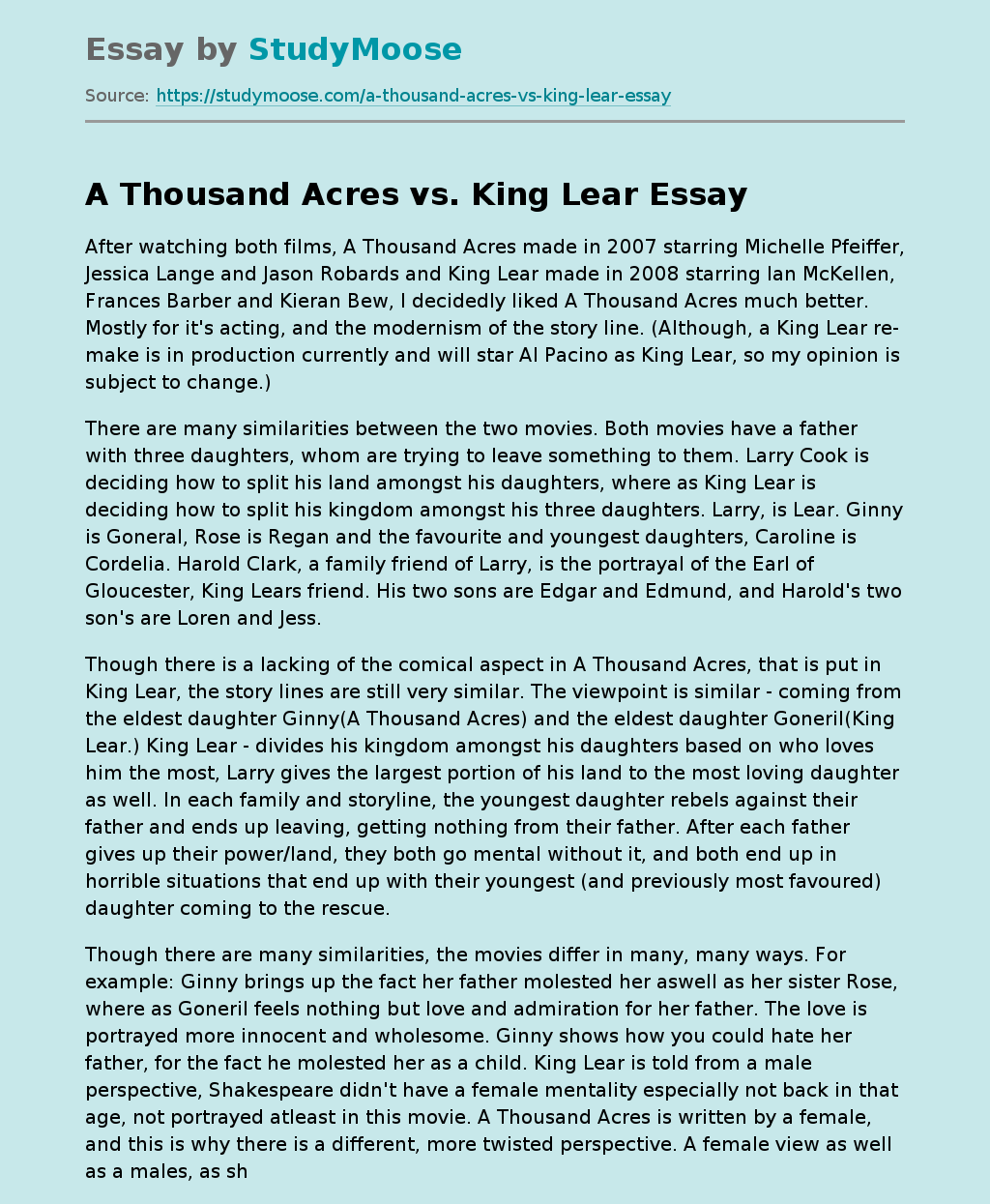