What do a talking baby, stock markets, and golf all have in common? Nothing, right? Wrong. E*Trade – a popular public online financial services group – uses all three of these entities to create a commercial that has had people talking for years. When the commercial is over, you are left in shock at what you just saw, a baby in a high-chair talking about the stock market. But will the ad’s weirdness produce sales of the company’s program for years to come as well?

Or just make it a highly talked about YouTube video? To the contrary, E*Trade does a professional job in conveying its message of simplicity to “average Joes” who are looking to either become day traders, start a retirement fund, or even banking.

Don't use plagiarized sources. Get your custom essay on
“ A Talking Infant, Financial Systems, & Golf ”
Get custom paper
NEW! smart matching with writer

E*Trade’s main audience is not a person with a net worth or five million dollars. E*Trade is looking to sell their product to “average joe” type clients. It can be assumed this because E*Trade uses the financial term “401k” in their commercial; this is the most popular tax investment form everyone has.

The main character of the commercial is “The E*Trade Baby,” but there’s a catch, the baby speaks with a mature older man’s voice. This adds a sense of weirdness to the commercial right off the bat. One may question the validity of a company whose commercials star a talking baby, but this is a clever marketing approach because if people see a talking baby, something they don’t see every day, they will immediately become engaged in the commercial.

E*Trade uses a baby as a symbol for inexperience, simplicity and an older man’s voice for knowledge.

E*Trade wants to show the audience that if a baby can you use the program, so can the audience. They also want to show knowledge, that E*Trade is a reliable and trusted company, so they use the voice of an older man to portray legitimacy. E*Trade wants to declare that “Yes, this is a legit company and yes, we’re simple to use,” so a talking baby fits in perfectly to both categories. Just like the Old Spice commercials talked about in class, the E*Trade Baby ads have many spinoffs with numerous situations the baby is in. The commercial I am focusing on is set in a golf country club locker room.

The ad starts off with the baby talking to a man named Frank. The baby says “Ah, this is weak, man. Frank’s trying to not pay me my winnings for the skins beat down I just issued him. ” The baby has now caught the attention of the audience with this opening line because people are drawn into the weirdness of a talking baby in the commercial. Now when he starts to talk about finance and what the company actually does, viewers will be already engaged. Not only does the talking baby raise questions that attract us to this ad, but there are many other.

For instance, why is a baby playing golf with old man? And why is there a computer in the locker room of a country golf club? All All these questions have no answers but it draws us into the commercial and makes us connected to it, hopefully throughout the commercial we will find answers to these questions, but in this case we do not. E*Trade’s goal is to get a lot of publicity and attention with their commercials while providing us with the smallest amount of information. This is because E*Trade wants people to inquire about the company and have them visit E*Trade’s website us. etrade. com.

Once on the website, people will be impressed by the fancy website that proves it is a legitimate company, and lured into signing up for an account The baby says “His (Frank) 401k’s tankin. Ya gotta grab the reins man. Get E*Trade, do some analytics, do some research (into the stock market), and take charge so I don’t have to subsidize your lack of skills. ” There’s actually a lot of information about the company and its message all in that little saying. The E*Trade baby uses a clever balance a financial terms and jokes to put the viewer in an informal setting while talking about a big decision a person must make.

E*Trade is not an elite company for only the “one-percenters” to use. E*Trade’s goal is to get skilled and novice users with just a little amount of money to open an accountant. Using the term 401k is strategically brilliant because everyone who works for a company most likely has one. E*Trade could have used any tax form number, but chose the most popular one to relate to the most people and with the current economy, it’s probably on the minds of most people right now. When the baby says, “Do some analytics, do some research, and take charge,” he is describing the job of the novice investor.

The baby is now describing that when using the E*Trade software, you are able to look at analytical charts and graphs, read news articles and research about potential stock purchases and basically to take charge of your life. E*Trade does not buy and sell stock for you; you have to do it yourself. You are in control of the future and E*Trade presents the question “What are you going to do to prepare yourself for it? ” It’s hard to tell whom is the exact audience E*Trade is trying to promote itself to, but assumptions can be made.

Since it is a golf setting in a country club, they are focusing on males anywhere from 20s to 60s (the general range of persons with a 401k). E*Trade did a good job picking a wide range of ages with this advertisement, which is what makes it such a good ad! Since the ad is set in a country club locker room, E*Trade is also advertising to a certain class of people I believe: well educated men who know a think about finance and who play golf. Golf is an expensive sport. I think if you have money to play golf you would be interested and would know the benefits of investing.

But are they also advertising to a whole inclusive audience with a cute baby to grab the attentions of mothers and grandmothers? Only the directions and producers know that answer. You can have a good commercial, the best commercial ever known to man. But if you don’t have the right exposure no one will see it. E*Trade played this commercial before and after Superbowl XLII on February 1, 2009. Back to what was said before on the age of the audience, 20s to 60s. That basically sums up the audience of the Superbowl as well; perfect.

E*Trade picked the most opportune time to run this commercial and not only reaches its projected audience, but all 90 some odd million people that tune in each year to watch the game, and the commercials. Another part of the commercial that is important to take into consideration is the point of view in which we view the commercial. Since the program E*Trade is used on a computer, the great minds behind this commercial put the camera where a usually webcam should be. This is to provide a visual of where the user of E*Trade’s product will be using the product.

This is brilliant because now we see the baby sitting in a chair in front of the computer using a keyboard and a mouse, in the same spot where we would use the program was well. The E*Trade Baby Commercial is trying to sell to their audience a financial services program available to download on the computer. E*Trade does a good job in getting the attention of its viewer and making a hard subject of finance fun and entertaining. E*Trade describes everything that their company’s mission statement says that they are, “A financial services ompany that is simple to use. Designed with the user in mind. ” There is no doubt in my mind that this commercial will go down as a classic and will have people talking about the “E*Trade baby” for years to come. To respond to the question previously stated in the beginning of this paper. Even though this commercial will be popular for years to come, will the ad produce sales of the company’s program for years to come as well? It turns out, no. When a person is looking to invest in money, they normally look for a company that is well-reputable and well-respected.

Humor is no doubt, un-debatable, a marketing tool to grab the attention of a viewer, but humor in advertising is very hard to pull off because you simply never know what people will laugh out. Some think it funny, others think it’s not. In order for a commercial to use humor, the company should be trying to sell humor. Clearly E*Trade does not sell humor.. Instead of a talking baby to grab the audience’s attention and provide a laugh, E*Trade should create a well-informative commercial that captures the audience’s attention and show how one can benefit from using E*Trade. 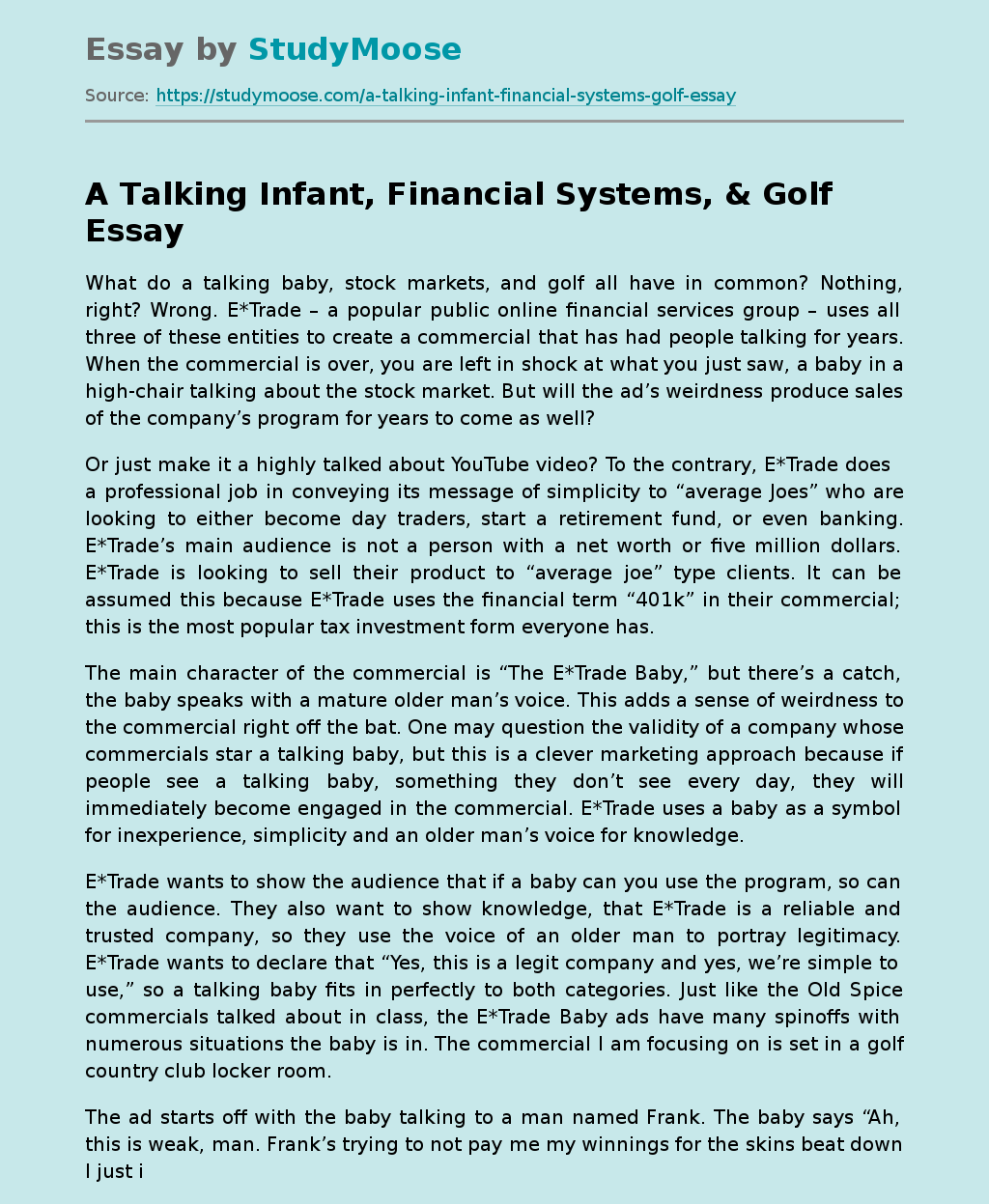