A 29-year-old man from Michigan intended to kill a woman and her boyfriend from San Diego who got unwittingly involved in the man’s virtual love affair. The man, by the name of Hile, had gotten himself involved in a “catfishing scheme”. A “catfishing scheme” is “when a person uses social media to pretend to be someone their not, typically to engage in misleading online romances”. Hile was involved in an Internet-only relationship for two years. He exchanged explicit photos and romantic communications with someone who he believed was a woman.

Don't use plagiarized sources. Get your custom essay on
“ A study of the catfishing scheme of hile according to special agent steve kim ”
Get custom paper
NEW! smart matching with writer

When Hile learned that the “women” he thought he was in a relationship was a man living in South Africa he “became enraged and vowed to find the man who deceived him and the women when images played a role in the deception”.

According to Special Agent Steve Kim in the San Diego Division, “The woman, in this case, was a victim twice”. Kim explains “when the woman was 18 years old, she took revealing pictures of herself for personal use, never intending for them to be seen publicly.

Those photos were later stolen from her online account, which she was aware of, but she had no idea what was being done with them”.

Hile was determined to learn the woman’s identity he cyberstalked her, conducted extensive online searches, and used hacking tools. Special Agent Steve Kim said “Eventually, he was able to hack into her e-mail account,” Hile got a hole of very detailed personal information on the women. He found not only information about the women but her live-in boyfriend and also their extended family and friends. After finding out her Address, telephone numbers and even information such as her favorite restaurant he purchased a bus ticket from Michigan to San Diego to kill the women. “Fortunately, Hile’s family sensed that he was planning something and alerted authorities, which eventually led to Hile’s detention in San Diego, about a mile from the woman’s residence.” When hill was arrested he not only had all of the information he collected about the women but also had duct tape, zip ties, and a to-do list which included things such as obtaining a knife and chloroform. Special Agent Steve Kim said, “Had he gotten there, we are convinced he would have hurt or killed the victims”. “Hile was found guilty by a San Diego jury in August 2013.”

This case influences my ethics because I feel that what this man did was wrong. Hile had no reason to attack the girl in the pictures, she was unknowingly involved with the internet-only romantic affair Hile was having. If Hile chooses to get involved in an internet-only romantic affair with someone he should have known the risks of doing so. I also feel that from a standpoint of him being arrested 5 years is not enough time in prison. “The maximum allowed by law for interstate stalking is five years in federal prison,” I think this man should have been charged with intent to kill. I know each state has its own cyber laws but is their not a law covering this type of situation? I could only find information on laws with intent to kill that involved a type of battery or assault paired with it. I could not find any laws specifically relating to someone who was cyber-stalking someone with an intent to kill them. I think this man should have had a different sentence due to the circumstances of this crime.

A study of the catfishing scheme of hile according to special agent steve kim. (2018, Apr 13). Retrieved from https://studymoose.com/a-study-of-the-catfishing-scheme-of-hile-according-to-special-agent-steve-kim-essay 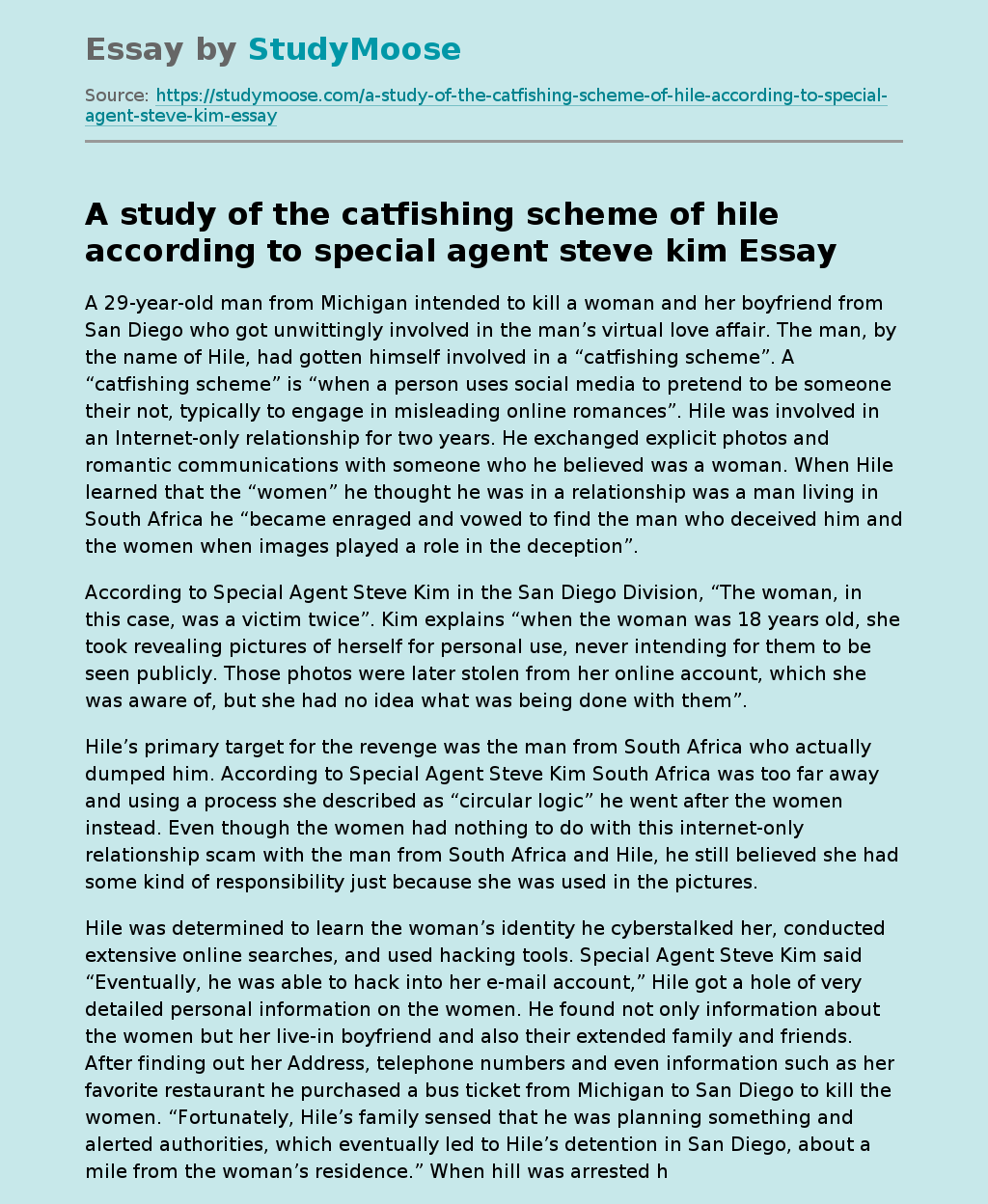