A Rose for Emily: Emily as a Tradition, a Duty and a Care

Emily Grierson is the title character in the short story “A Rose for Emily.” The narrator portrays Emily as a “tradition, a duty, and a care,” (Faulkner,79) but in her actions, it is obvious that Emily is a true outsider. She shuts out the townspeople, only allowing them to see certain aspects of herself and leaves them to speculate the rest. She lives with her father until his death. Any chance at love for Emily was denied due to her father driving potential men away so that he could have her all to himself.

Don't use plagiarized sources. Get your custom essay on
“ A Rose for Emily: Emily as a Tradition, a Duty and a Care ”
Get custom paper
NEW! smart matching with writer

Having been sheltered and secluded by her father, she continues to lead that kind of lifestyle after his death.

The house is also falling into decay which also coincides with Emily’s aging and bloated and pallid appearance.

It is clear that Mr. Grierson was extremely controlling of Emily. He showed this in his attempt to drive potential suitors away. After his death, Emily attempts to take control by denying that he has passed and refusing to give up his body. Before they can resort to using the law to take his body, Emily finally gives in and releases the body to them so that he can be buried properly.

The townspeople are not surprised by her actions. They felt it was something she needed to do because she had nothing left, so she had to cling to the one thing she did have, and that was her father.

Miss Emily follows her own rules. She does not abide by the law like everyone else. A deal had been made that she didn’t owe any taxes. Colonel Sartoris told her it was because her father had loaned the town money and therefore the taxes were remitted. When a new generation took over and sent her a bill, she either ignored it or sent back the bill with a note. When they came to her home to talk to her about it, she still adamantly refused to pay the bill, telling them she owed none and to speak to Colonel Sartoris about it.

Even though the Colonel had been dead for ten years and there was nothing in the books to show that the taxes were remitted, she refused to accept the new authorities and has them shown out. She also refuses to put numbers on her mailbox when federal mail is put into place and in stating why she is buying the poison. No one ever pushes her and forces her to follow the law, it is as if they are afraid to question her or just ignore her eccentricity. They even refused to bring the multiple complaints of a bad smell to her attention and instead snuck into her yard at night, breaking open the cellar door to sprinkle lime in there as well as in all the outbuildings. No one wanted to “bother” Miss Emily.

Eventually a man named Homer Barron comes to town. He begins to spend time with Miss Emily. At first the townspeople are happy that someone has piqued her interest. Many thought that they would eventually marry, even though Homer states that he is not the marrying kind. Many feel that she will find a way to persuade him to marry even though it seems as though he is interested in men. Eventually, the townspeople all believe that they will soon be married because of items that Emily buys for Homer. Homer leaves at one point while Miss Emily has family visiting. The townspeople see him return, but it is the last they see of him.

This is when Emily’s failure to follow the law takes a turn. She was never questioned on why she needed the arsenic. It of course gets around town that she has purchased it, and they all believe she will kill herself. Even though Homer is never seen again and even though her home is mainly closed up until her death, except for the few years she teaches china painting, no one ever thinks that the arsenic is being used in a more sinister way.

After Miss Emily’s death, the townspeople come to pay their respects. The men do so more out of respect while the women are more interested in seeing her home after all these years. It is soon discovered that Homer Barron’s dead body is lying in a bed in one of the rooms. Next to his body, on the pillow, it is clear that Miss Emily has spent time laying there beside him. It is clear that Miss Emily couldn’t bear the thought of Homer abandoning her, so she poisoned him so that she would always have him with her. She clung to him just as she had her father, but this time she found a way to make sure Homer would not be removed from her home.

No one ever calls Miss Emily crazy, even though she had a great aunt that had gone crazy. All her actions are just thought of as part of her eccentric ways. No one thinks to question her or what she does. It is clear that Emily is suffering from some sort of mental illness. She clearly shows she has abandonment issues after being sheltered by her father. She refuses to accept or reveal his death until forced to do so. It is also clear in her actions of poisoning Homer Barron. After her father’s death, the narrator states that “she was sick for a long time after that.”

It seems as if maybe she had some sort of mental breakdown after she is left alone. If only her father hadn’t sheltered her so much and refused to allow her to find love and seek friendship, she would not have acted in such desperate ways. If she could have gotten help to get over her fears or was able to talk to someone about it, maybe Homer would not have been poisoned. Although her actions and the outcome were tragic, in a way you have to feel bad for her because she was following the example that her father set for her. He desperately clung to her and in turn, she desperately clung to the men she cared for.

A Rose for Emily: Emily as a Tradition, a Duty and a Care. (2016, Dec 31). Retrieved from https://studymoose.com/a-rose-for-emily-emily-as-a-tradition-a-duty-and-a-care-essay 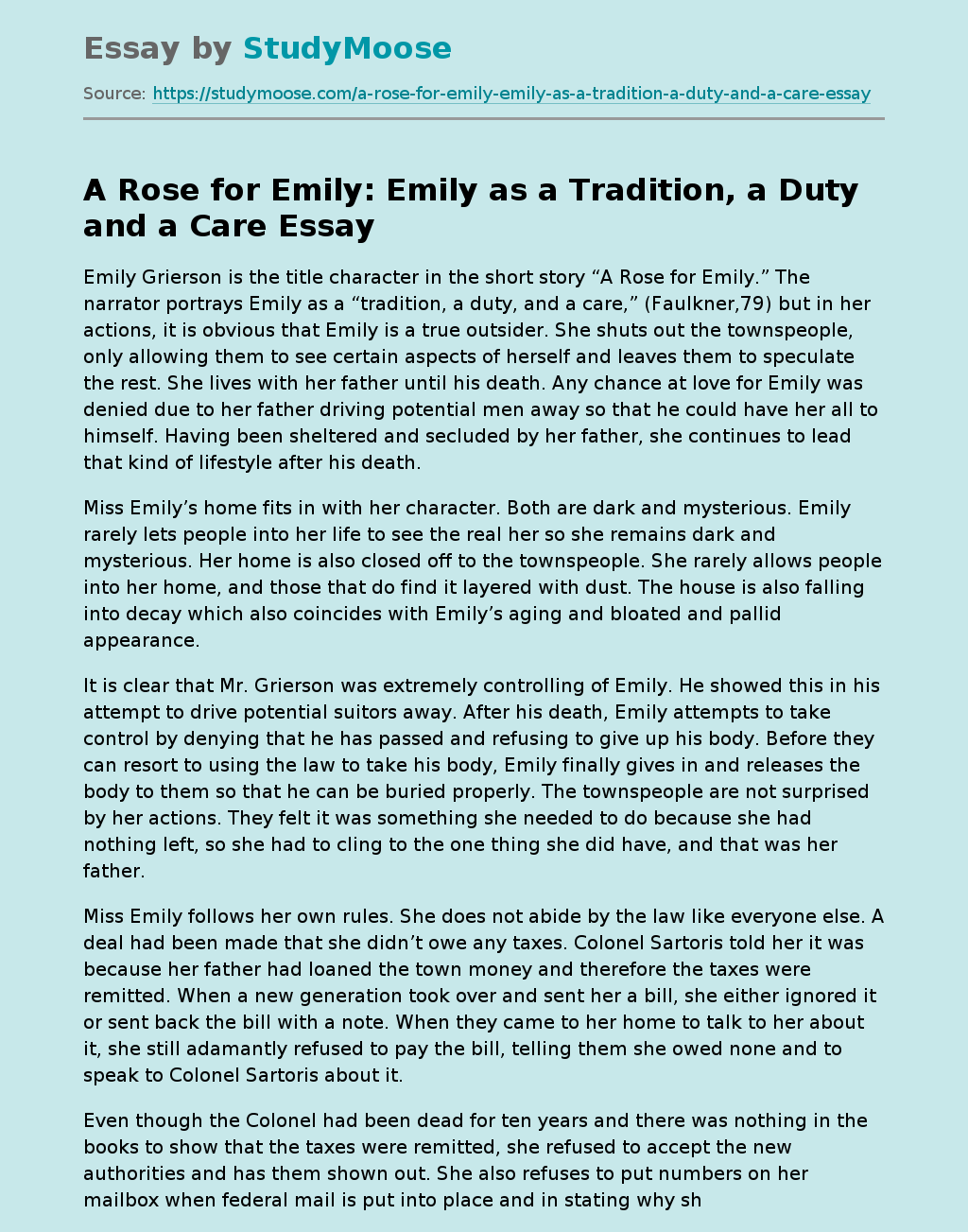