"A Rose For Emily" and "The Lottery"

“A Rose for Emily”, by William Faulkner and “The Lottery”, by Shirley Jackson are both short stories that deal with conflict from either the community or individually. Faulkner hints us readers the main conflict in “A Rose for Emily” is not only Emily but other characters in this short story. For “The Lottery”, Jackson hints the readers the conflict is more on the social side meaning the community or society not only the main characters. But the main comparisons between these two short stories are the characters, and the communities that seem to be stuck in the past.

William Faulkner starts the short story off with saying the character Emily, from “A Rose for Emily”, is dead. Faulkner divides the short story into five parts, and those five parts talk about Emily’s life which is spoken from the town’s perspective. Emily is described as a burden, whose “old fashioned” and is basically a mean old lady. The first part starts off with Emily not wanting to pay her taxes and the mayor sets up a meeting of the Board of Aldermen to her home.

Not only was she showing no manners, she kept saying she had no taxes to pay and tells her servant, “the Negro” to show the gentlemen out. The short story continues on with mentioning Emily’s father’s death. The town’s people felt sorry for Emily, not only on the fact that he passed away but the fact that her father was a controlling man.

Controlling meaning her father didn’t want her to seek men. Emily was in denial for her father’s death, “She told them her father was not dead. She did that for three days” (151). She couldn’t let her father go because her father was her life and that was the only life she had.

The other parts talk about Emily’s sweetheart named Homer Baron. Everyone in town are happy about her having a sweetheart, but it goes downhill once they find out Homer Baron liked young men. Emily ends up buying poison and it wasn’t easy buying since the druggist was curious as to why Emily wanted it for. The townspeople on the other hand assumed it was so she can kill herself since she’s going through a lot. But Emily doesn’t only purchase rat poison; she ends up buying hologram toilet set with H.B written on them. Six months has passed by and Emily hasn’t been seen, till one day when people noticed her weight gain. Towards the end of the story the people noticed the Negro (servant) runs away while Emily is dying. They then open a door and the first thing the town’s people notice is Homer Baron’s body being decayed. Next to his body was a print of a body that seemed to lay there every night and a piece of Emily’s grey hair.

“The Lottery”, by Shirley Jackson is about a small town that gathered in a square on a summer day, June 27th. When you think of “Lottery” you probably assume something positive that deals with money. But that’s not true, in this short story “The Lottery” is a ritual that’s been going on for generations. It has to do with throwing a rock to a person that gets a mark in the middle of the paper, all towns had stopped doing this ritual but this was the only town that continued. The person who’s in charge of this ritual is Mr. Summers along with a helper Mr. Graves who’s the post master. The Lottery starts off with mixing the papers inside a box and calling out the names from a list. Once everyone had picked out the paper and seen if they had got picked, the people in the village noticed Bill Hutchison ended up getting the black dot. Tessie who is the wife, stands up for her husband and say’s it wasn’t a fair pick so Mr. Summer gives them another chance. Everyone in the family got to pick a paper out and this time Tessie ends up getting picked. Now since it’s a ritual it was something you had to do, that’s when everyone in the village including Tessie’s family picked up rocks and threw it to her. “It isn’t fair, it isn’t right.” (192) Tessie constantly is yelling this because she knew this wasn’t right, it wasn’t right to kill an innocent over a ritual.

Both these short stories seem to fall in a similar comparison which is conflict between individual and the community. The narrator in “A Rose for Emily” gives away that Emily is stubborn; she doesn’t care at what anyone says of her. But in this short story it’s not only one conflict, its several conflicts we notice. One was Emily’s father; she didn’t want to let his body go because he was her only life especially since he was controlled. Another conflict was the community and Emily. People that lived in that town would always say rumors, and basically won’t help her they would just sit back and wait. Then we have Emily and Homer Baron, Emily was lonely, and Homer seemed to be the only person that was someone she loved. Even if it didn’t turn out the way she hoped, she knew just having his presence there was enough.

So this shows Emily had conflicts with reality, present and past, and being lonely. “The Lottery”, on the other hand was conflict between community and individuality, for example Tessie and the village she was living in. The whole ritual “The Lottery” symbolizes any sin or any bad behavior that has been caused to be passed down from generation to generation no matter how cruel it could be. Tessie is against this whole ritual, she finds it not fair because of killing an innocent person. Old Man Warner was also another person who noticed this ritual wasn’t right, he notices the changes throughout all the years he’s been around. He mentions, “It’s not the way it used to be,” “People ain’t the way they used to be.” (191). In “The Lottery” it shows that no matter if the box changes, the ritual will always remain the same, and instead of the town actually stopping this from happening they join. The past and the community seem to be one of the other noticeable conflicts. The reason for why Tessie could’ve also been yelling out “It isn’t fair” because this ritual has ended everywhere else but continued in this village. The village is still holding onto the ritual that’s been taking hold for so long that they aren’t really thinking of any other consequences. Both of these short stories fall into somewhat of the same conflict. Like Emily, if she wasn’t so focused into the past meaning being “old fashioned” then she would’ve fit well into the society without feeling lonely. As for Tessie and her village, if they stopped continuing a ritual that was held on for so long then Tessie wouldn’t have been killed. 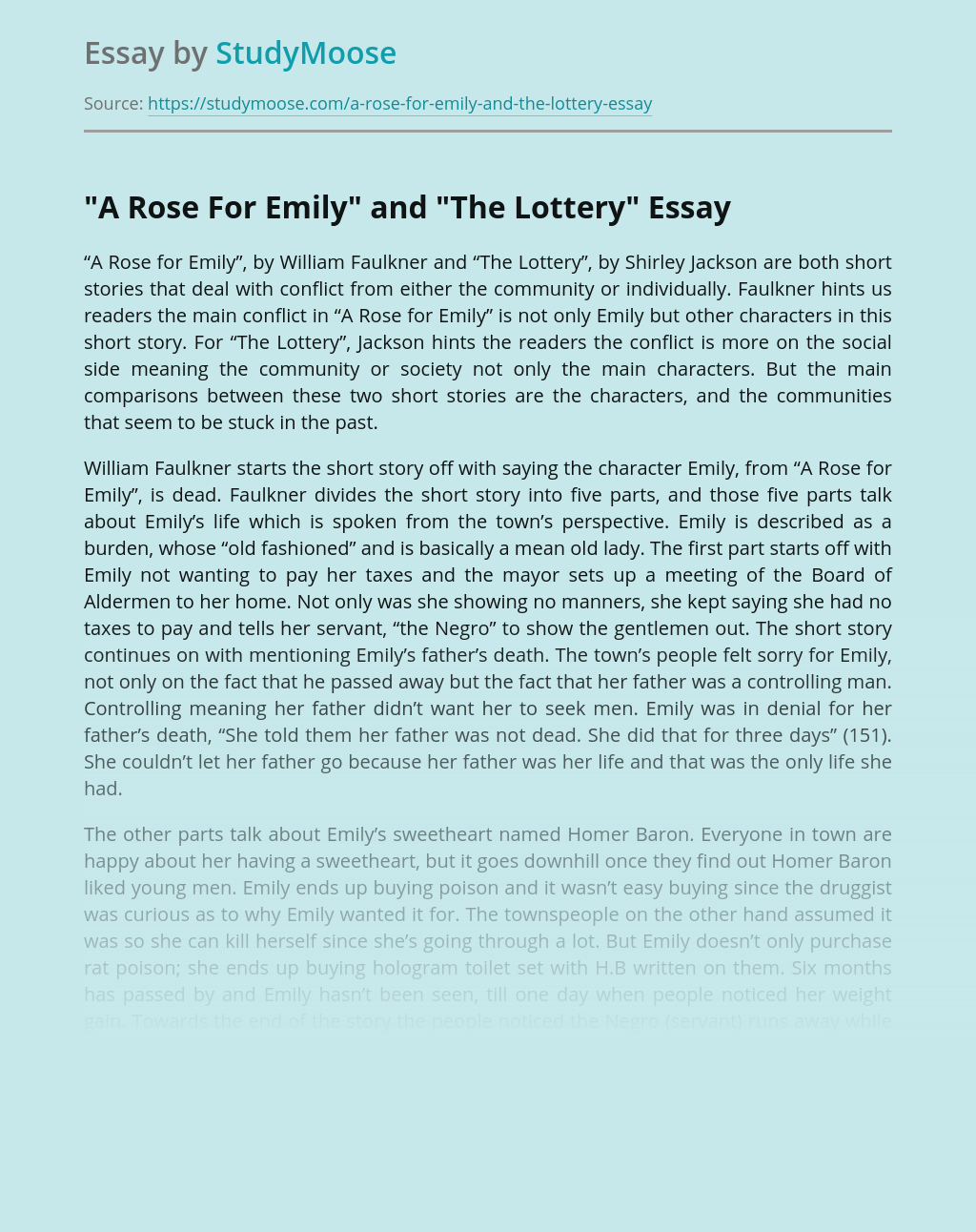 Don’t waste time
Get a verified writer to help you with “A Rose For Emily” and “The Lottery”
Hire verified writer
$35.80 for a 2-page paper
Stay Safe, Stay Original