"A Rose For Emily" and "How to Date a Brown Girl (Black Girl, White Girl, or Halfie)" Analysis

In the works of literature by Junot Diaz, and William Faulkner, when analyzing components such as socioeconomic class, search for love, and location, all three are different in each piece of writing.

‘A Rose For Emily’, takes place in an old house built in the 1870’s on what used to be one of the best streets in town. The house is fancy and has cupolas and spires. William Faulkner created his own Mississippi county called ‘Yoknapatawpha.’ It’s very comparable to any southern town during that period.

Don't use plagiarized sources. Get your custom essay on
“ “A Rose For Emily” and “How to Date a Brown Girl (Black Girl, White Girl, or Halfie)” Analysis ”
Get custom paper
NEW! smart matching with writer

Emily’s home remains unchanged while the rest of the town is more modernized. The townspeople don’t admire Emily. People in town were jealous of the wealth Emily possessed before her father passed away. Now that Emily isn’t wealthy anymore, the people in town believe she will be more equal to them and fit in with them more. Her poverty gives the town a reason to feel sorry for her and to see her as a regular human being.

In Junot Diaz’s ‘How To Date A Brown Girl (black girl, white girl, or halfie)’, the location is very different and it takes place in New Jersey during the 20th century. It is probably somewhere between the 1970’s and 1990’s specifically ‘the terrace.’ The terrace represents ‘the ghetto’ a place where minority members of a group reside. In ‘Homecoming for Turtle’, Junot Diaz talks about immigrating to New Jersey when he was a kid from the Dominican Republic and finding it hard to go back to the place he once called his home.

He hasn’t gone back in 20 years. I can empathize with the feeling of leaving your home behind since I also haven’t gone back to my home country in 12 years. Many people migrate to America hoping for opportunity and a better life as well. There were issues, which emerged when Junot Diaz arrived to Santo Domingo. For example, he was arguing constantly with his novia and did not feel as welcome when he arrived as he expected to feel. At one point he even felt like his family was trying to poison him by giving him sandwiches with ants. ‘

She blithely served me and the novia sandwiches completely covered in fire ants.’ Junot even states that if he didn’t have such high expectations in his head, then maybe things would have turned out better.

Socioeconomically, there were many differences between all three pieces of writing. For example, in ‘A Rose For Emily’, Colonel Sartoris who is the mayor made up a plan for not making miss Emily pay taxes. The mayor didn’t want her to feel like a charity case so he made up an imaginary loan from her father to the town and described that the town was paying it back by releasing her from having to pay taxes. When Emily’s father passed away, she became a responsibility of the town in a way. Emily was

A tradition, a duty, and a care; a sort of hereditary obligation upon the town.’ However, people in town did decide they do in fact, want Emily to pay taxes. Emily would receive lots of letters and bills. Representatives of the town would come to her house and ask her to pay the debt. Emily is constantly in denial and tells them to speak with the mayor who has been dead for 10 years at that point. She rarely leaves her house and returns the bills she receives every December. ‘After her father’s death she went out very little; after her sweetheart went away, people hardly saw her at all.’ In Junot Diaz, ‘How To Date A Brown Girl (black girl, white girl, or halfie)’, ‘The narrator feels the need to hide aspects of his life from his ‘dates’ the speaker stereotypes how his dates will behave and react to certain events. You can tell he comes from a lower income family. For example, ‘Clear the government cheese from the refrigerator.’ This cheese is something that has been provided by the U.S. Government so it signifies assistance he receives. It represents his social status. Also, he lives in an apartment and based on this quote ‘Since your toilet can’t flush toilet paper, put the bucket with all the crapped-on toilet paper under the sink. Spray the bucket with Lysol, then close the lid.’ We can see his toilet doesn’t function properly either which a sign of his status. He also lives where mostly minorities live and sometimes people live in those areas because of economic pressure.

The search for love and desire is a key theme throughout all three works. In ‘A Rose For Emily’, Emily’s father was always strict and had high expectations for Emily when it came to marriage and finding the right guy. He turned away every guy that had an interest in her. When a northerner Homer Barron is seen giving Emily rides in his buggy, some people in town are happy for her despite the fact he’s from the north. Other people believe a person as wealthy as him shouldn’t be with her. The town thought that she would end up with Homer. However, Homer drinks with younger men and mentions that he isn’t interested in marriage. This leads people to believe that he is gay. Emily is unmarried and over thirty, which is considered to be old within their society. Emily never learned how to truly love someone. When Homer came into her life, she wanted to have him but she couldn’t. I believe that her lack of certainty and not knowing how to respond to the situation properly, when Homer didn’t want to marry her ultimately caused her severe and abrupt behavior. Her actions led to Homer Barron’s death. Emily has issues moving on from things. For example, she slept with Homer’s dead body for over 30 years and I believe this signified she didn’t want to let him go. There was evidence of this when her gray hair was found on the pillow. In ‘Homecoming for Turtle’, Junot Diaz has his own version of searching for love. For him, he didn’t feel as if he was home in his heart. He longs to feel welcome and home where he belongs. When he came back home finally, he described his feeling as ‘If you fused the instant when heartbreak occurs to the instant when one falls in love and shot that concoction straight into your brain stem, you might have a sense of what it felt like for me to be back ‘home.’ I believe he’s comparing falling in love to the love he has for his hometown and heartbreak to not being there in over 20 years. I believe he desires deep down to find that place where he really feels at home truly. In Junot Diaz’s ‘How To Date A Brown Girl (black girl, white girl, or halfie)’, it’s ironic how the title is called this but you shouldn’t take his advice. Junot Diaz shows he just wants a relationship for something physical. Diaz usually alters himself to fit the girl and the stereotype he has set for her. He doesn’t want to be himself; in fact I think he’s a little bit embarrassed. For example ‘He also recommends running a hand through your hair like ‘the white boys do’. The narrator hides his origin when he gets rid of the Dominican ‘artifacts’ in his apartment. He hides his true identity in my opinion and who he really is and tries to be the ideal guy for these girls. He seems to know how things will play out based on the girl’s background and it seems as if he’s accepted all possible outcomes that may occur, even failure. In all three pieces of writing there is desire and search for love in a way.

Overall, within all pieces of writing, we can compare and contrast many aspects of each piece. When looking at components such as search for love, socioeconomic classes, and location. They are all different but similar in some ways too. For example, when looking into society and social status, Both Emily and Diaz were poor and had a low status in society. Emily’s taxes were being paid for her and her father did not leave her much when he passed away. She lived in a nice home however; it was deteriorating day by day as the rest of town became more modern. When discussing the search for love, Emily didn’t understand what real love is or what it means. Perhaps Junot Diaz doesn’t either since instead of focusing on making deep connections and getting closer with the girls he socializes with, he just puts his focus into their background and fitting in towards their standards and what they are looking for. In ‘Homecoming with turtle’, Junot experiences a different type of heartache; he’s trying to find his place to call his own and to call home. He also had issues with family and his girlfriend as well. He had high expectations which led him to be let down in the end. In terms of location, Junot Diaz’s took place in New Jersey and the Dominican Republic and Faulkner’s took place in the south.

"A Rose For Emily" and "How to Date a Brown Girl (Black Girl, White Girl, or Halfie)" Analysis. (2019, Dec 11). Retrieved from https://studymoose.com/a-rose-for-emily-and-how-to-date-a-brown-girl-black-girl-white-girl-or-halfie-analysis-essay 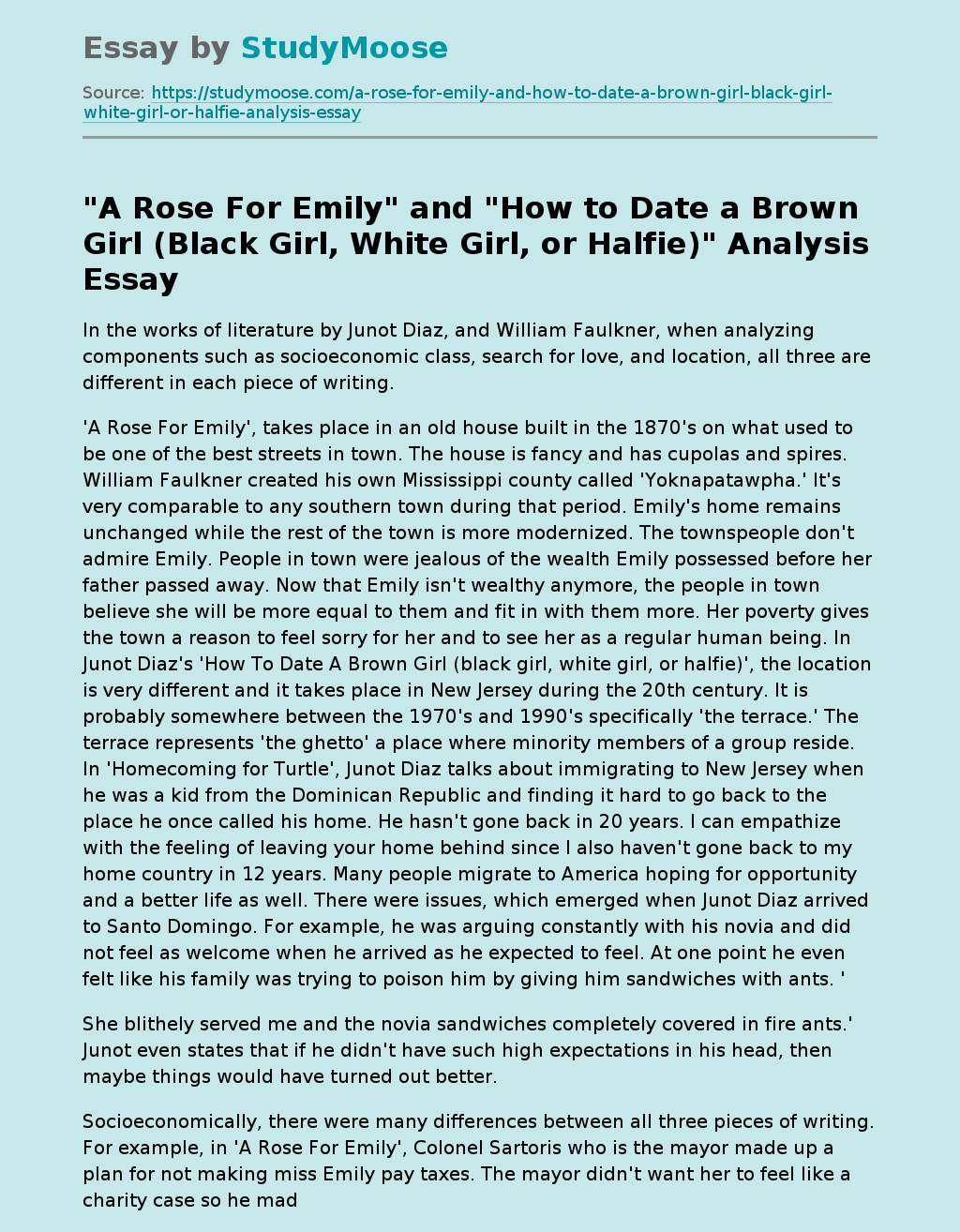