A Review of “Everything Good Will Come”

Everything Good Will Come heralds the full-length debut of a powerful new voice in feminist fiction – Sefi Atta, whose short stories have garnered acclaim from Red Hen Press and Zoetrope, among others. Told in the voice of Enitan Taiwo, a young woman living in Lagos, Nigeria, in the aftermath of that country’s independence, Everything Good Will Come’s narrative covers nearly thirty years and is framed by the lifelong friendship between Enitan and Sheri, a half-caste neighbor girl with a sharp tongue and wild ways.

Don't use plagiarized sources. Get your custom essay on
“ A Review of “Everything Good Will Come” ”
Get custom paper
NEW! smart matching with writer

A nation struggling to come to terms with its independence, couching its freedom in the oppressive terms of internal military rule, Nigeria is a country with unnatural borders created by outsiders. But to Enitan as a growing girl, the private wars within her parents’ home shape her natural skepticism and fear of loss. Sheri’s daring defiance provides a welcome but forbidden counterpoint to Enitan’s own willful uncertainty – until the day when a group of boys, including one on whom the boarding-school educated Enitan has a crush, rape and ruin Sheri at a secluded party.

The incident cements in Enitan an enduring distrust of men, a notion bolstered by the fact that so many seem to betray her. When she finally commits to the quiet, strong Niyi, she struggles to keep herself intact in their personal orbit of in-laws and expectations that would have her submit, even though she has a career as a lawyer and a fierce intelligence that should otherwise put her on equal footing with her husband.

As her failure to carry a pregnancy to term and her philandering father’s political outspokenness put additional pressure on Enitan’s marriage, she finds herself at odds with Niyi, over-extending herself and endangering her unborn child to try to make a difference in a country whose political terrain is as unpredictable as its “no water no light” infrastructure. The conclusion she reaches, the choices she finally and deliberately makes raise this novel to levels of bittersweet greatness. Everything Good W ill Come is the first novel by Sefi Atta, a Nigerian born-writer who has already won awards for her plays and short stories.

Everything Good is the story of a girl and then a woman finding herself against the backdrop of a dynamic and often dangerous Nigerian landscape. Enitan Taiwo, the fictional female protagonist who “writes” the story as an autobiography, is eleven years old when she meets Sheri Bakare, the daring girl next door, just the kind of girl her mother doesn’t like. The two are only fourteen when Sheri is gang raped in the park one summer afternoon; twenty years later, the women are still bound together, jinxed, by an event neither of them can forget. It took several years at boarding school in England before anyone challenged Enitan”s belief that only bad girls were raped; it was several more before she was able to shake off the burden of guilt and disgust about sex imparted in her by her mother. It is even longer, a lifetime (or the twenty-four year span of this novel at least), before Enitan manages to wriggle free from the strait-jacket of expectation she feels strapped into by her society’s ideas about and demands of women.

For much of the novel, which begins in 1971 and ends in 1995, men define Enitan’s life – but women hold it together. As the years go by, Enitan recounts a series of let-downs by the men in her life; unfaithful boyfriends, and a father she once idealised hiding painful secrets about the past, politicians, who gradually run the country into the ground. The pillars of her world are her friend Sheri, “the nearest I’d come to having a sister;” her mother, after years of estrangement but eventual understanding and reconciliation; Grace Ameh, a campaigning journalist she initially distrusts but comes to respect. This support network cements Enitan’s life, along with the dependence she develops on herself and her own resources. Politics are initially a far-off backdrop to the events at the fore of Enitan’s life – further in the background than the tumultuous relationship between her parents, which ends in divorce and years of bitterness in the family; further than the day-to-day danger of living in Lagos; more distant than her own marriage and the problems she encounters.

Enitan has always lived a sheltered and privileged, middle-class life, screened from the reality of real life in Lagos. She notes changes in government like the changing of the weather, and questions why women should want to fight in the political arena when there is so much to fight for at home: “Human rights were never an issue until the rights of men were threatened,” an angry Enitan tells her father, an outspoken lawyer who is calling for release of political prisoners unlawfully detained by a military government. “There’s nothing in our constitution for kindness at home. And even if the army goes, we still have our men to answer to.” Yet as Enitan wakes up to the world around her – to the challenges of her sex and the value of family – we witness a gradual political realisation, too. And when her father is imprisoned by the military government for his call for strike action, politics leap suddenly to the fore of Enitan’s thoughts – driving her to finally make a break from her closeted existence. Published in 2005, Everything Good Will Come is consciously written in the mould of a long tradition of African and black American women writers. At one point, Enitan is looking around the office of the female journalist who becomes her friend: “I recognised some of the authors on her shelf.

Ama Ata Aidoo, Alice Walker, Buchi Emecheta, Nadine Gordimer, Toni Morrison,” she says, intimidated. Whether Sefi Atta will ever reach the heights of the authors she so admires remains to be seen. Her first attempt is a vivid and explorative read – a very real portrayal of life in Nigeria for a middle-class woman in the latter part of the twentieth century. At times, her feminist musings become a little tired, a little repetitive – certainly for a reader who does not share her viewpoint. But Atta has produced a beautifully crafted novel which gives a loud voice not only to silenced women, to a troubled Nigeria, but also to a quiet Africa, writing with pride about a continent she loves. Through Enitan, she explores the issue of African writing, and the need it feels to explain itself, where other literature would not. “After I’d come to terms with how polite I was being, I became incensed at a world that was impolite to me.

Under-explained books, books that described a colonial Africa so exotic I would want to be there myself, in a safari suit, served by some silent and dignified Kikuyu, or some other silent and dignified tribesman. Or a dark Africa, with snakes and vines and ooga-booga dialects. My Africa was a light one, not a dark one: there was so much sun. And Africa was an onslaught of sensations, as I once tried to explain to a group of English work mates, like eating an orange. What single sensation, could you take from an orange? Stringy, mushy, tangy, bitter, sweet. The pulp, seeds, segments, skin. The sting in your eyes. The long lasting smell on your fingers.” Atta’s Africa is tangible, its characters real, its story told in a way that you really feel for its protagonist.

A Review of “Everything Good Will Come”. (2016, Jun 05). Retrieved from https://studymoose.com/a-review-of-everything-good-will-come-essay 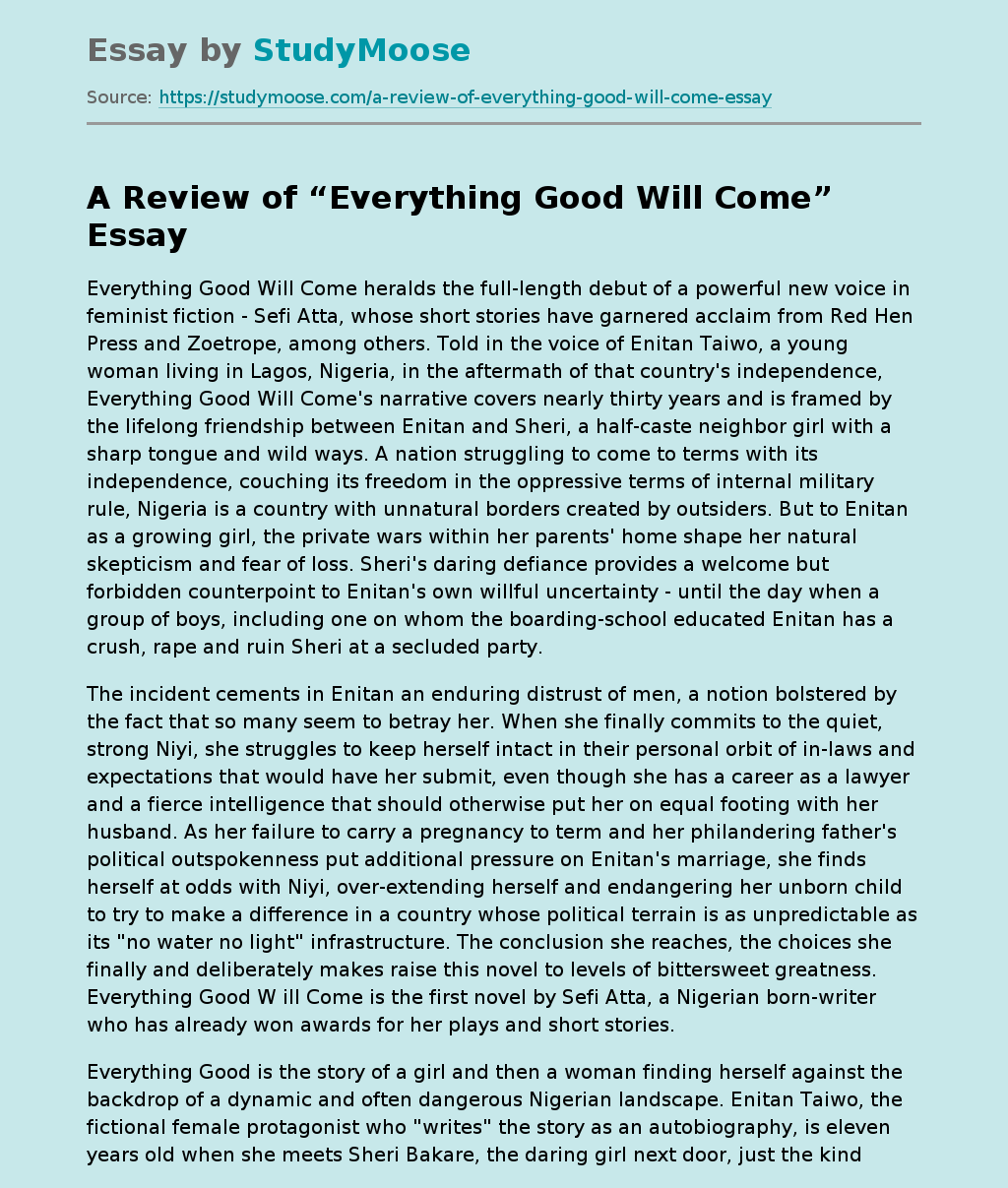