A Research on Socialisation Issues

The term socialization is used by sociologists, social psychologists and educationalists to refer to the process of learning one’s culture and how to live within it.

Socialization is also a way that people learn the norms and value of their society. Norms are the rule that governs how people are expected to behave, while values are ideas that people share about what is good or bad in the society. An example of normal behavior is to hold the door open for people behind you. The seriousness of norms can vary; someone that commits murder will receive legal punishments and a child with bad table manners will irritate others.

For example if an individual is shy and his or her friends are out going, it will help him in a way that he will be outgoing and regain his self esteem.

Early childhood the most severe and most crucial socialisation as it is then that we acquire language and learn the basics of our culture. As we grow older we start to form primary attachment with friends and other adults, this is done through our early days in school. Beliefs, behaviour and other characteristics are what make up culture. Culture is learnt behaviour. Secondary socialisation occurs between individual and those people in their life with whom they have secondary relationship. After the age of 5, secondary socialisation begins. Secondary relationship is one in which the individuals does not have a close personal intimate or face to face relationship with the people that are responsible for the socialisation process. The secondary socialisation represents the way we start to learn about the nature of the social world beyond our primary contacts. We have to learn to deal with people. It is often done through other agents such as the mass media, religion, peer group and workplace.

All these are known as agents of secondary socialisation. The most important agency that children come in contact with is education. This is because it reinforces the norms and values that a child has already been taught. The child begins to make friends and have many influences which are very opposite to primary socialisation. Both agents of primary and secondary socialisation belong to agencies of socialisation which are families, schools, religion and mass media. The main agencies of socialisation are the families, education and school, religion, peer groups, mass media, and workplace. Socialisation is important because without it, we will not behave like humans. For instance, kamala and Amala are one of the feral children found in wolves’ den the jungles in INdia. Feral children do not have any of these two types of socialisation, they are children brought up by animal instead of human being. An example of feral children is that of two infant girls Kamala and Amala who were discovered in jungles of India, by reverend J.L.A.Singh in 1920. The infant girls ages are, Kamala who is the older one was about eight years and Amala the younger one was about one and half years old. They had no cloths on, they can not walk upright, and they can not sing, they can not eat with their hands, they eat raw food and they were afraid of humans and kept good distance from humans. They did not display any characteristics of human qualities.

For example, they did not use tools of any kind, not even a stick. They did not know how to make shelter; they did not laugh, and did not show any affection. These did not use any language in communication; they did not point at things or directions, nor nod their head in agreement or disagreement. They preferred to eat and drink with wolves by lapping it from a bowl. Reverend Singh said that he tried to teach both Kamala and Amala ordinary human behaviour. Amala the younger one died in a year later. Worms came out of her mouth immediately after she died. Kamala became more approachable after death of her sister. She was eventually partially house trained and became used to the company of other children. After a year of the training, she was able to walk upright and learnt how to speak a few words.

The interaction of gender and ethnic socialisation powerfully affects identity development and prompts, differential reaction to majority prejudice. A gender is considered as the differential socialisation of male and female in relation to change social structure. Socialisation tells us that socialisation reinforces our gender identity. Gender roles has been learnt and passed on from generation to generation. Gender roles vary considerably in different societies and Anne Oakley in a range of books over many years has demonstrated that gender roles in our society acquired via the process of socialisation rather than biologically determined. Oakley (1981) argues that 1992) gender socialisation had four central element thus Manipulation, Canalisation, Verbal appellations and Different activities. Only Canalisation and Manipulation on will be discussed. This is done through two process described by Oakley (1986) as Canalisation, where parents directing their children interest towards appropriate games and toys for their gender or sex. Example of canalisation is that of Stephen Pfohl (1992) talks about how he asked his parents if he could have a baby brother or sister, and his parents refused. He then asked if he can have a doll instead, and his parents agree, he went upstairs to his room with his window open, he heard his parents discussing the doll and their concerns about it. Hearing that, Stephen came downstairs to his parents and asked them to take the doll back and exchange it with a gun, which his parents did. The second one is manipulation and here the parents would encourage or discourage their children way of behaving on the basis of what they considered to be normal or abnormal behaviour for male or female child. Example of manipulation parents that influences their children choice of friends through manipulating environment, such as choosing where they live, monitoring and supervising them and also teaching them how to behave and relate to other children around them. Some parents will like their children to associate themselves with rich children or children from good home.

Sociological theories of gender identity show that sex belongs to biological attributes that play some roles in reproduction. Gender refers to social expectation of behaviour which have a place in determining our status. Murdock (1949) believes in the sexual division of labour. He belies that biology is important in explaining gender socialisation. Men will be socialised to carry out strenuous tasks like mining and house building while women undertake domestic tasks like cooking and water carrying. Parsons (1955) also believes that biology is important. That woman will have expressive role as a career in the family. Man should be the head of the family who plays a role model for the children and also bringing them up. Oakley is a feminist sociologist who thinks that Murdock and parsons are biased because the only paid attention to some of the evidence Re-socialisation takes place in our adulthood when we learn new things. A good example of re-socialisation is that of our workplace where we are taught how to operate machines. How to us the utilities in the work place. Another example of re-socialisation is that of Kamala and Amala, they learnt how to eat with their hands, how to walk upright, how to speak straight, how to drink from cup, how to eat cooked food, how to put on clothes, how to socialised with human beings. Another example of re-socialisation Is that of a prisoner.

Prisoners that have spent a very long time in prison will need to be re-socialised when the finish serving their sentence as they have spent a lot of time inside the prison. They need to be taught how to do certain things out of the prison world; how to be independent and also what to do to keep them busy. They also need to know how not to behave. Re-socialisation also involves racism as a learning process involving one’s culture and how to live within it, but refers more specifically to the socialisation of the ethnic minority groups. Racial socialisation also buffers a child’s awareness of racial discrimination. Perceived racial discrimination is associated with negative mental health behaviours in adolescents such as low self-esteem, depressive symptoms, psychological distress, hopelessness, anxiety and risky behaviour. Racially socialised children are aware of the presence of racial barriers, and the oppression and injustice of racial discrimination can be actively resisted through socialisation, creating a stronger racial identity. In conclusion, according to Chinoy, (1961:75) socialisation prepares the individual for the roles he or she wants to play, providing him or her with the necessary repertoire of habits, beliefs, and values, the appropriate patterns of emotional response and modes of perception, the requisite skills and knowledge. It also plays a vital role in communicating the contents of culture from one generation to the other as it provides for its persistence and continuity. In conclusion socialisation is in our day to day life as human being. Without socialisation we would have a perfect life on this earth, we will all have been behave like animals, knowing nothing about good or bad.

A Research on Socialisation Issues. (2016, Feb 27). Retrieved from http://studymoose.com/a-research-on-socialisation-issues-essay 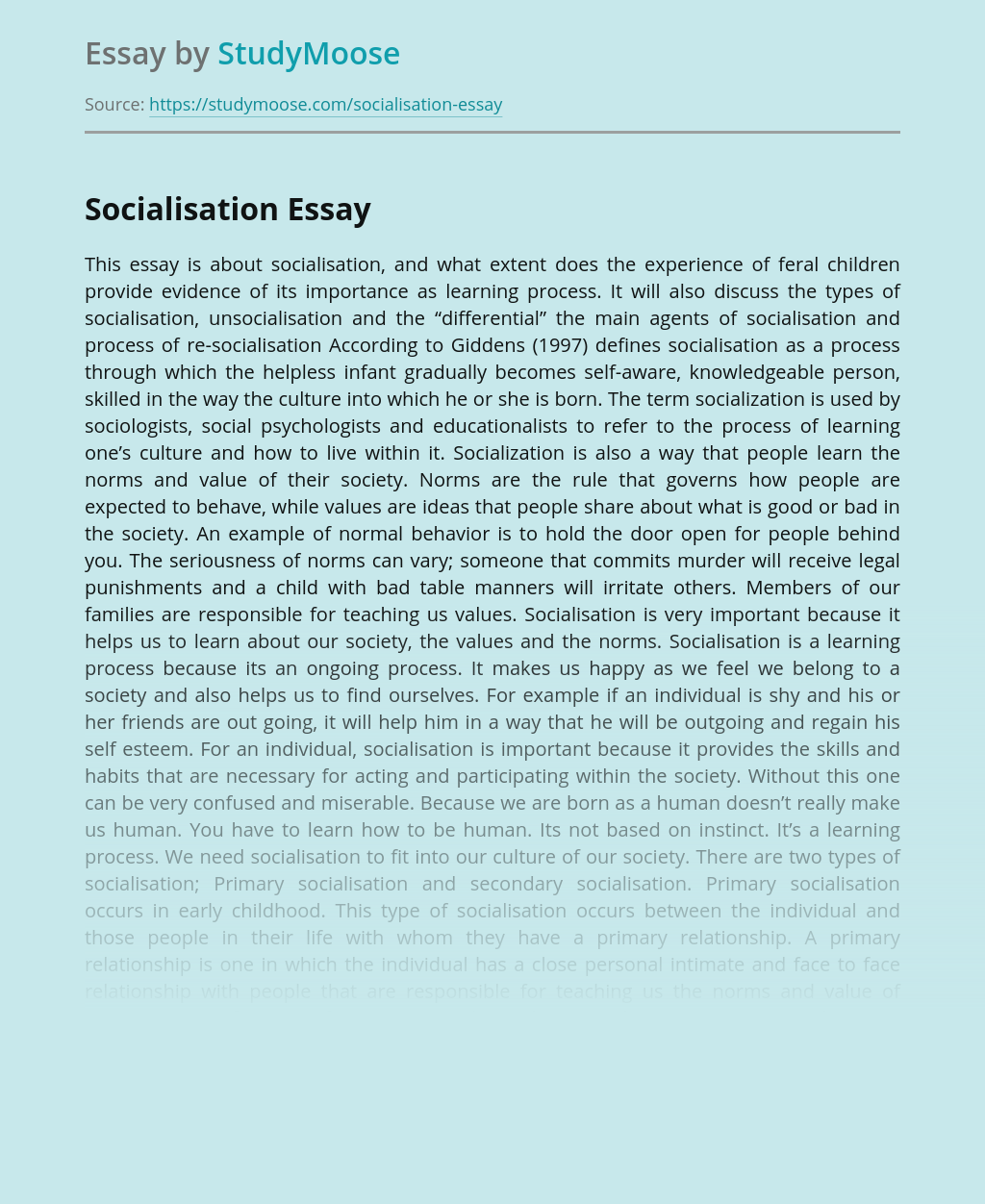 Don’t waste time
Get a verified writer to help you with A Research on Socialisation Issues
Hire verified writer
$35.80 for a 2-page paper
Stay Safe, Stay Original