A Reflection Paper of Mumbaki film

The film Mumbaki is about the conflict of modern and folk beliefs being faced by an Igorot named Joseph (played by Reymart Santiago). He was given the opportunity to study Medicine in Manila. The problem here is caused by the different socialization or culture that occurs in the Philippines. There came the time that the lead character has to choose between his dream to work in other country together with his girlfriend, Nancy (played by Rachel Alejandro), or fulfill his duties as a member of his tribe.

Don't use plagiarized sources.
Get Your Custom Essay on A Reflection Paper of Mumbaki film Just from $13,9/Page

It is clearly seen in the film, the opposite socialization that occurs in the Philippines. The simplest manifestation of this is the type of clothing worn by characters in the film: the city has grown to wear jeans, polo, t-shirt, etc. while in the mountains, they wear the traditional “bahag” or barely bold. Also the difference between the alcohol from the city and the once that came from the mountain is shown in the film.

Furthermore, the use of modern and indigenous methods of treatment is also shown in the film. The methods of treatment studied in the city are using antibiotics to stop the spread of epidemic illness in the Igorots while the indigenous method is praying to their gods/baki or to their so called ‘mumbaki’. The last is, what is ought to be followed by the main character: the vengeance for his tribe or to use his knowledge in medicine.

I agree on the decision that the main character applied to his problem. As one of the member of his tribe, he chose to fulfill his responsibilities to his tribe to take revenge to the opposing tribe yet he made it to sustain his profession by putting up a health center up the mountain to support the medical needs of the tribal people.

Joining two different cultures is a big deal and it is hard for them to do that, yet the group still managed to help each other to resolve their problem and create a new different culture out of it….

A Reflection Paper of Mumbaki film. (2016, Apr 09). Retrieved from https://studymoose.com/a-reflection-paper-of-mumbaki-film-essay 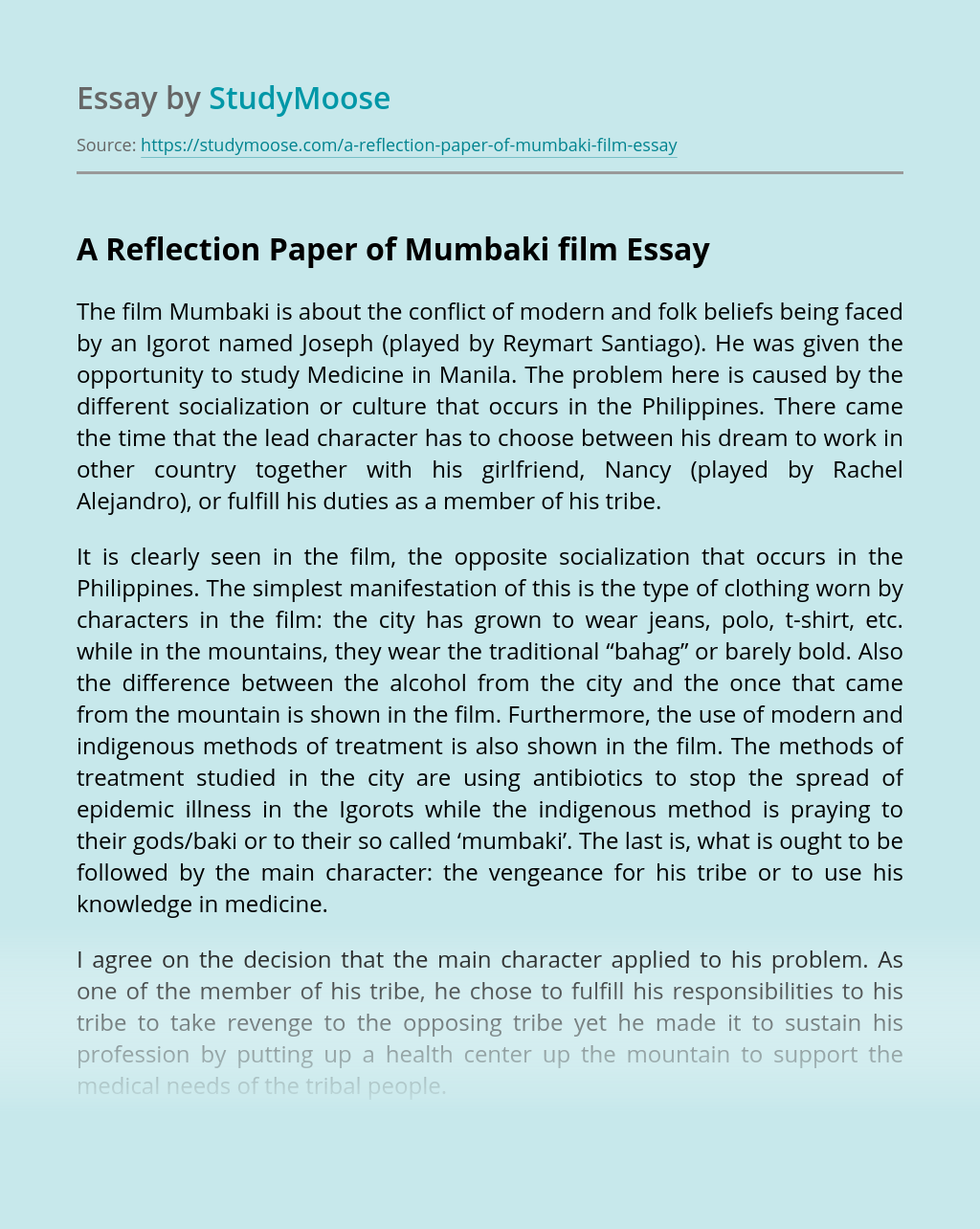 Get Essay
The Effect of Television on the American Culture

Rate this post The television has positioned various issues pertaining to the lives of the general public in a number of ways. Undoubtedly, views and opinions of the public may be easily controlled and influenced through content of various commodities of television. People opinions may perhaps form by their views on certain subjects. Starting slightly...

The Film Is Not Yet Rated

Rate this post At some time in your life, you probably have been prohibited from watching a movie either by a doorman at a movie theater or by your parents, simply because of the rating. I have to say, I never really paid attention to how films were rated, or who was behind the rating...

Modern Cinema Is a Boon

Rate this post Cinema is a major source of recreation in most countries of the world especially in India where the majority of people live below poverty line. It provides us with entertainment and sometimes educates us too. Depending on the quality of films produced by the directors, one could label cinema as a curse...