Comparison of Nims' and Burns' Poems

Robert Burns wrote “A Red, Red Rose” and edited by Peter Urbani. It was first in printed in 1794 in A Selection of Scots Songs. This was shown in ballad stanzas because it was composed with four – line stanzas or quatrains, having alternating tetrameter and trimeter lines which emphasized that the first and third lines of each stanza had four stressed syllables, or beats whereas the second and fourth lines had three stressed syllables. The line of this poem “That’s sweet / ly play’d / in tune” was an example of iambic meter in which the first syllable was unstressed and the second was stressed.

Turn in your highest-quality paper
Get a qualified writer to help you with
“ Comparison of Nims’ and Burns’ Poems ”
Get high-quality paper
NEW! AI matching with writer

The implication of this poem was about the thoughts and descriptions of love in a way that exceeded beyond the non – literary sources from which the verse was drawn. The poet first similarly declared his love in a blooming rose in spring and then in a melody “sweetly play’d in tune. ” For me, these similes indicated the beauty and happiness of being in love.

The metaphor “sands o’ life” pointed out the eternal nature of the writer’s love that explained the extent of his love.

There were much imagery mentioned here like the color red that meant love and passion and the exquisite image of the rose was represented by the recapitulation of the color “red. ” The word “Newly Sprung” intended for his sincere and great love. As I analyzed this piece, I obtained the knowledge and information about the true meaning of love. The way he illustrated his love, I observed that for him it was precious and worth keeping for.

Burns also declared that once we felt love and it was true, it must be for a lifetime. “Till a’ the seas gang dry, my dear, And the rocks melt wi’ the sun”, meant that no matter how far or near the lovers were, love will always be there and stays forever. The entire logic of this poem is about the unconditional love that he can offer to the one he used to love. The true love in a sensible way was being illustrated by John Frederick Nims in his poem entitled “Love Poem. ” The love that was impossible and unreachable was also the idea being shown by this sonnet. The essence of sticking to the one you love regardless of his imperfect qualities was the theme of this poem.

From the metaphors in Nim’s piece, he brought to reality the figure of a very clumsy individual. “All devotion, at your knees” meant that despite of that unpleasant quality, she was so beautiful, charming and refine. Her good qualities were the reason why those who knew her keep her. From the lines “So gayly in love’s unbreakable heaven/Our souls on glory of spilt bourbon float,” it characterized that even clumsiness wouldn’t affect his love. The line “Their souls float on spilt bourbon”, which proved that they were happy with the presence of her fault.

The metaphor in the line “Be with me darling early and late,” meant that they must stayed together during their youth and when they became old. The meaning of this line “Her hands, which “shipwreck vases,/At whose quick touch all glasses chip and ring,” showed the gracefulness of people. , and “should your hands drop white and empty/All the toys of the world would break,” described that the things she did using her hands wouldn’t fade away but will still remain and unreplacable.

There were also symbolic images like “my clumsiest dear,” “chip and ring,” “bull in china” and a “bur in linen” that showed the partnership of appreciation and condemnation. But in the stanza “The refugee uncertain at the door/you make at home…”(6 – 7) he commended the quality of his lover as a charitable one. Nevertheless, the whole idea of this poem was about the exposition of the girl he loved, her positive and negative side. He wanted to share the readers that in loving a person, we must adore his good qualities and love them despite of flawed qualities.

The two poems are the same in iambic meter and in quatrains. The tone of both writers as they convey their feelings on their loved one’s shows that they are so much in love with love. They are so sincere in expressing their affection and passion towards their lovers with no hesitation and no limitation. When it comes to the voice according to the writers, I can see that Burns is so fascinated to his lover. All the things that he can see are all beautiful and the way he promises his love is so precious for him.

As we go deeper beyond the meaning of the poem, the author doesn’t mind the negative traits of his lover nor mentions his flaws. Nevertheless, Burns only indicates how big his love is for the girl whom he loved. Moreover, how he promises that he can offer and sacrifice a lot for the fulfillment of his love. While, Nims obviously starts his poem in a different way. He shows the negative side of his lover. He even mentions the wrong impressions toward his girl. He doesn’t even bother to cover up the flaws of the one he loves instead of covering, he exposes the blemishes of his lover.

However, the author doesn’t mean that he just wants to intimidate his girl but proudly tell the whole world and all the readers that despite of her flaws and shortcomings, he loved her so much. Now the difference of the two poems when it comes to declaring the love for their special someone is that the first author loves without looking or even mentioning the flaws of his girl or loving the person unconditionally while the latter explains how to love by accepting the reality that a person has the negative and positive characteristics.

The symbols or images use in both poems also differ. Burns uses similes that focus on the natural resources like rose, music, seas, sun, sands, and rocks. For me, it implies that the author is a nature lover. He shares to the readers that when we are in love, the beauty of the things that surrounds us are all that we can see and appreciate and it gives a happy feeling. While, Nims uses metaphors where in the center idea is about the things or toys that can cause noise and to the things that we usually use everyday like vases, glasses, bulls, burs, dime and toys.

In here, he shows the poem as if it is in a movie or in a story telling type. He details what are the happenings and how he accepts the flaws of the one he loves. For me, this poem is so interesting because he directs the readers to the exact situation of the things that are happening to him. He never hides the flaws of his girl maybe because the true meaning of this poem is about acceptance. According to my evaluation, accepting the weaknesses of the one he loves will show the true meaning of love.

We don’t have to hide the imperfections of our loved ones because if we learn to love and accept them despite of the blemishes of the one we use to love, I think the power of love will strongly manifest and can’t be broken or shaken easily. But for me, both poems are so interesting and appealing. In reality, there are two kinds of lovers. The first one is the one who doesn’t see the negative side of the person that he used to love because he is blinded by his love while the other one is that he sees first the weaknesses of his lover and then learn to love that person.

Both kind of love is passionate and ideal. Learning how to love though in different ways depends upon the person but we must love unconditionally, fervently, without hesitation and reservation, with acceptance and forgiveness, and by showing it through actions and words.

Comparison of Nims' and Burns' Poems. (2017, Jan 30). Retrieved from https://studymoose.com/a-red-red-rose-essay 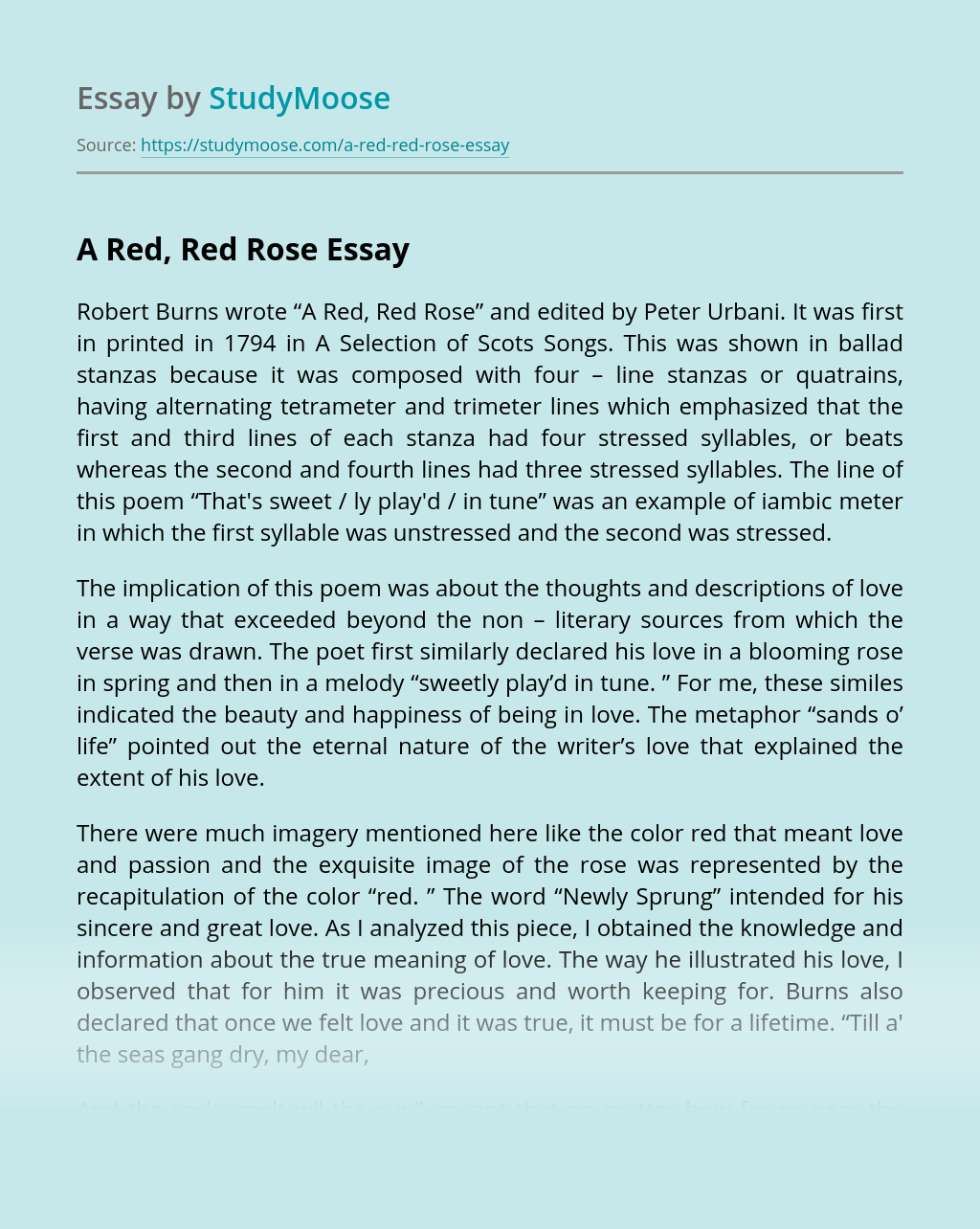 Turn in your highest-quality paper
Get a qualified writer to help you with
“ Comparison of Nims’ and Burns’ Poems ”
Get high-quality paper
Helping students since 2015
Stay Safe, Stay Original