The theme of the poem, “Rising five” by Norman Nicholson is that humans, adults and children, like nature are impatient and are always looking to the future and, in effect, are dead if they do not spend a moment to appreciate what is around them (the present). This theme is demonstrated by means of subject matter, carefully chosen diction, figures of speech, parallel construction and antithetical parallelism.

To demonstrate the theme of impatience the poet begins the poem by quoting the boy when he says “I’m rising five, not four” which also introduces an irony that one so young should measure his life in terms of numbers and look forward to the future when he should have no need to do so.

Turn in your highest-quality paper
Get a qualified writer to help you with
“ A Poem Rising Five by Norman Nicholson ”
Get high-quality paper
NEW! AI matching with writer

The word “alive” in the first stanza is also an ironic diction that suggests that the boy is more dead than alive. To make the idea of impatience more clear to the reader the poet also uses parallel constructed refrain at the end of each stanza: “not four, but rising five.

To convey the idea that nature like the boy is impatient, rushing quickly for the finish line, to end the season, the poet uses antithetical parallelism: “we never see the flower, But only the fruit in the flower: never the fruit, But only the rot in the fruit.

” What the boy does not realize is that nature (the seasons and their specialty for example (spring is the season for the flowers to bloom)) never dies but only returns the next year and will return again and again, but after the boy dies he will be gone for ever.

The fact that we stop being human if we reduce life to numbers is conveyed in the seventh line of the first stanza when the poem reads “fifty-six months or perhaps a week more.” The poet could have chosen to use the words “four years and eight months,” but chose to use the words “fifty-six” to emphasize more on the numbers. Although these words aren’t spoken by the boy it is an emphasis on the usage of numbers, showing that the boy has reduced his life to numbers and therefore is no longer living fully. By quoting the boy and introducing an irony at the same time, using ironic diction, parallel constructed refrain, antithetical parallelism, subject matter and greatly emphasizing the use of numbers Norman has skillfully demonstrated the impatience that the world has, humans and nature. 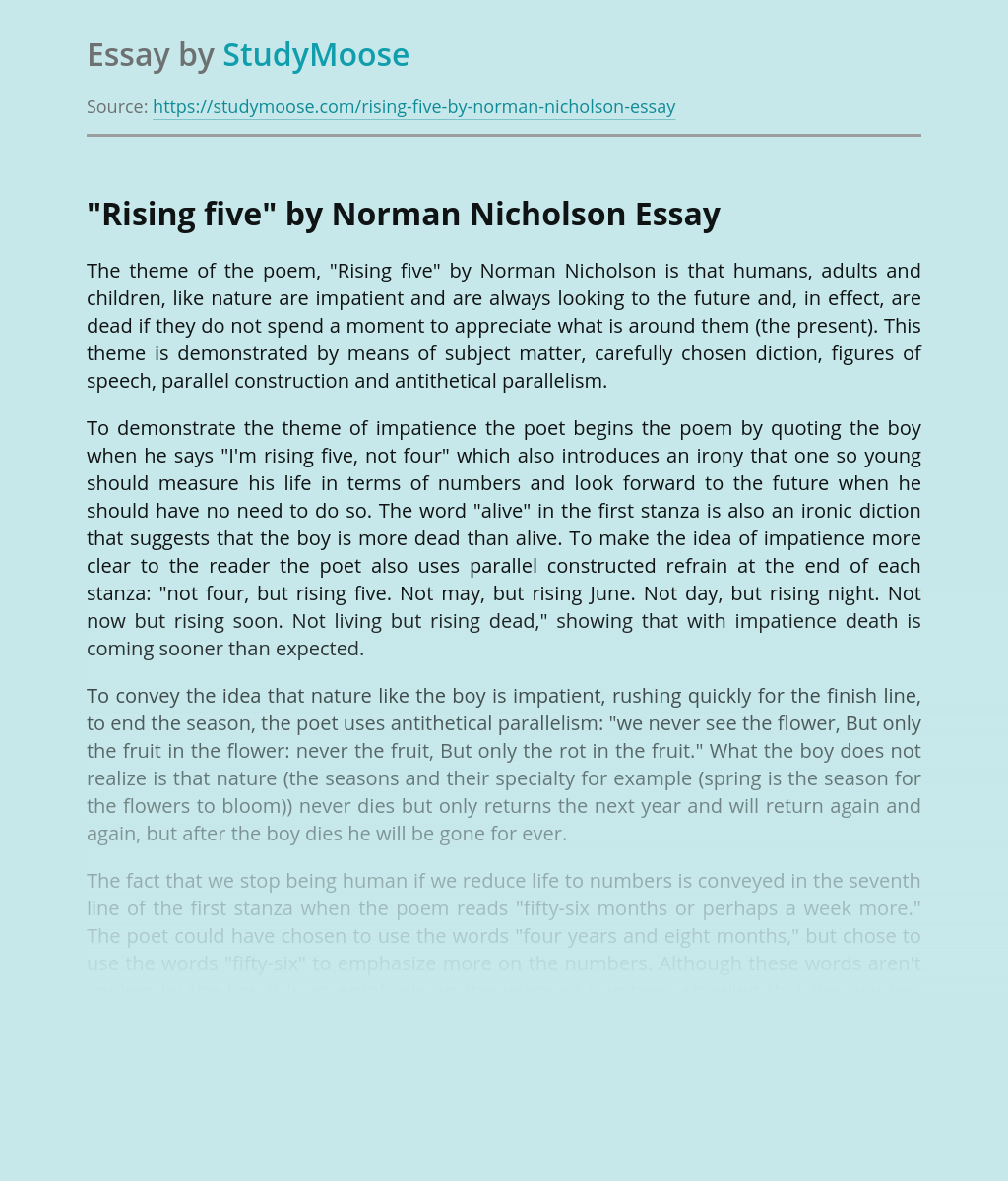 Turn in your highest-quality paper
Get a qualified writer to help you with
“ A Poem Rising Five by Norman Nicholson ”
Get high-quality paper
Helping students since 2015
Stay Safe, Stay Original