A Play Baal by Bertolt Brecht

I saw a performance of Baal, written by Bertolt Brecht and directed by Evan Parry. The play was not an emotional play, but an intellectual play. It caused the viewer to think about the existentialist nature of Brecht1s writing and the underlying meaning of the play. Although I have studied existentialism and followed the play intently, I still could not fully understand what Brecht was trying to say through Baal.

Don't use plagiarized sources. Get your custom essay on
“ A Play Baal by Bertolt Brecht ”
Get custom paper
NEW! smart matching with writer

My interpretation is that Baal represents man and his desires and what those desires can lead to. At the beginning of the play, Baal is in good spirits and loved by all. He has doors open to him; he is asked to publish his poetry and sing his songs at a bar.

Through the play, his life gradually becomes worse because he drinks too much and has many girlfriends. People start to dislike him and he loses his apartment.

Then more and more people start to dislike him and he moves from job to job and location to location with nothing but Ekart to see him through. But then he realizes that he is finally in love – with Ekart, but she doesn1t love him and makes it obvious by having other men and women in her life. So, Baal kills her since he can1t have her for his own. By the end, Baal has nothing but himself to blame for his condition. His drinking problem and his problem of seducing every woman he meets drives him to his death, and causes everyone to repudiate him.

The acting ranged from not-so-great to very good.

The only problem was that since not all the actor1s names were used, it was difficult to figure out who was who in most cases. Baal, played by Robert Seay, was in the very good part of the spectrum. The amount of lined he had to memorize was great and he didn1t stumble on them once. His emotion was clear throughout the play and his focus was obvious. The way he played drunk was great; his hair and shirt were disheveled, but he wasn1t stumbling all over the place and slurring his words. He acted just like a drunk person trying his hardest to pretend to be sober. When he spoke you understood what he was feeling and saying because he spoke clearly, slowly and loudly which helps, but he also understood what he was saying, which helped the audience understand what he was feeling.

At the end, when he was dying, the audience understood that he was dying alone, with nobody to help him through and that his life had held no meaning. The audience knew this because of his actions and because of the tone of his voice. Ekart was also very good. In the beginning, when she was trying to persuade Baal to sleep with her, she was seductive and conniving. She tempted him to leave the woman who he made leave her husband for, but Baal resisted. Her tone of voice was what I found to be her greatest asset because it told so much about her. Her tone of voice made her objectives clear. Whenever she spoke, I found what she wanted to be clear. Her movement was comfortable onstage which made it easier to watch her. It was easier because since she was comfortable, I wanted to follow what she was doing at all times.

When she was with Baal, she acted indifferent, and when she wasn1t with Baal, it was obvious that she didn1t care for him as much as he did for her because she was not faithful to him. In the end, she acted the same way Baal did at the beginning. And the way she did it was with precision, she indulged in whatever she did, just like Baal. I felt that Ekart1s acting was very good because she was understandable and easy to follow. The girls who shared words in sentences were also very good. The way they followed each other and the way they made their voices to sound the same was what pleased me the most.

There were no uncomfortable silences in between what each girl said, which meant that they were very well prepared. If they weren1t as prepared, they wouldn1t have been able to follow each other as well. Their preparation was also quite clear because there were no uncomfortable spaces in between what each girl said. They did not have much physical acting to do, but the way they used their voices and the way they followed each other so well impressed me. The acting in Baal was good; the acting ranged from the priest, who wasn1t all that great to Baal, Ekart and the chorus girls who were great. I found Baal to be interesting and realize the acting was difficult to take on, but it was obvious who prepared the best for the play. Those who were prepared were good, but those who weren1t either didn1t have a good performance or didn1t warm up until late in the play. Overall, I felt the acting and the play were both successful.

A Play Baal by Bertolt Brecht. (2020, Jun 01). Retrieved from https://studymoose.com/a-play-baal-by-bertolt-brecht-essay 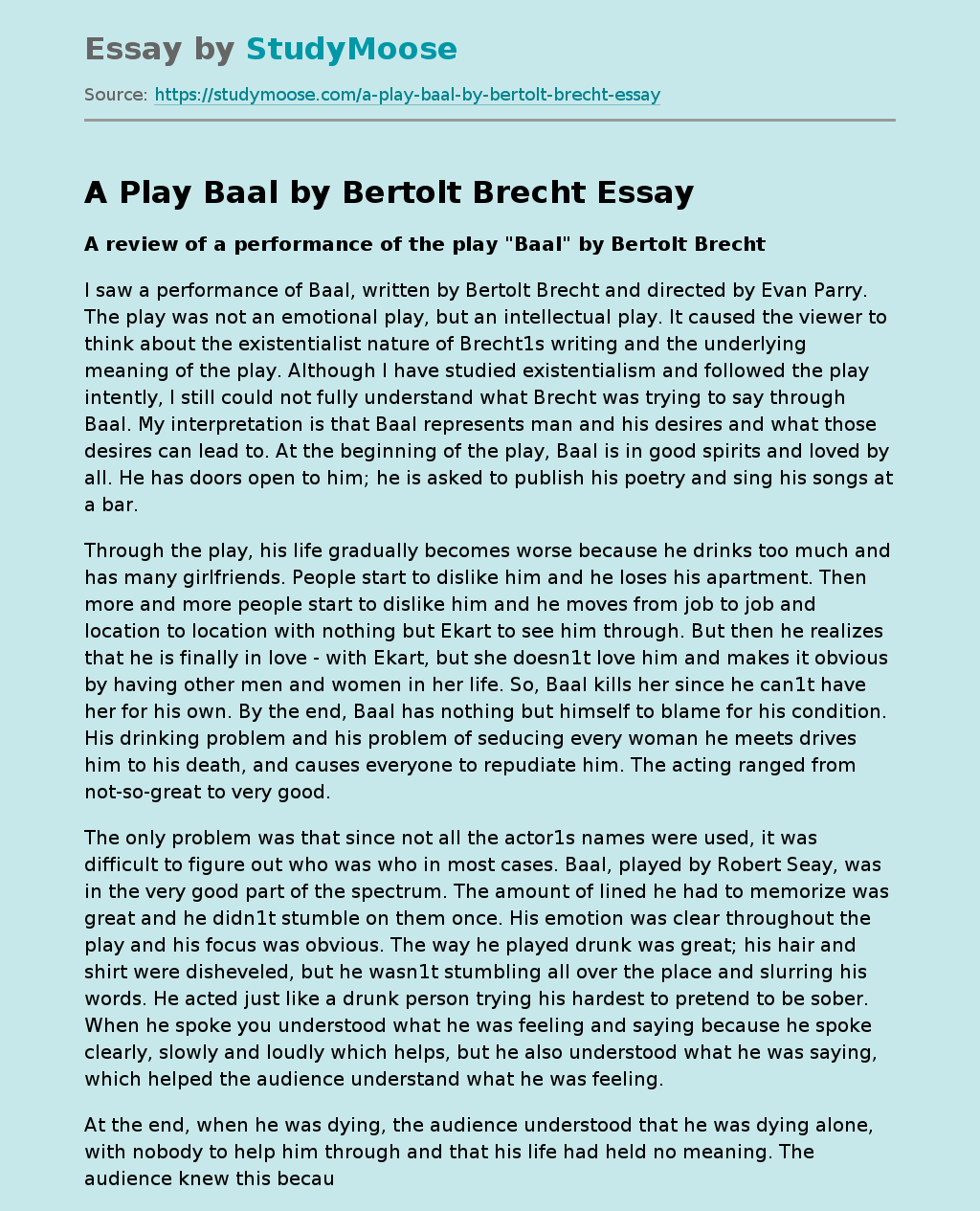