A Planet without Trees: A Nightmare or Our Future?

Can we imagine a world without trees? What a world without trees would look like? Could such a world even exist? Let us close our eyes, and try to imagine a desolate Earth. Imagine no more paper, and everyone would have to resort to some other source or maybe technology could help, but that is, if anyone was left at that time. Trees are an important factor to our existence not only because they produce paper, lumber or chewing gum, but due to the fact that they serve an important role in the carbon cycle, they are the key factor to our very existence! Due to our ever increasing population, that seemingly distant future is getting near with each passing day.

Don't use plagiarized sources. Get your custom essay on
“ A Planet without Trees: A Nightmare or Our Future? ”
Get custom paper
NEW! smart matching with writer

Many solutions have been proposed to this environmental issue called deforestation, from shipping to the Moon or to what not. But what’s missing is that no one actually knows the importance of these quite and calm beings that have been in our service for millions of years, that not only hold the earth together in a way, but also hold us together, without them it won’t be paper or timber that we would be missing but nothing else would be there in the first place.

We can ask anyone what is a tree? And the answer we will get in “that thing outside” with someone pointing us in the direction, but what actually are trees? What is their importance? Are they just useless things standing out of the ground? Should we be so ignorant or oblivious to something so important in our life that we purposely are destroying it? Let’s begin with what are trees? Trees are the largest and the longest living organisms that have ever been on this planet.

Trees display miraculous and tremendous feats of engineering and combined with a complex chemical factory and a huge biological system. Their roots give them the ability to absorb water and salts from the earth and transport them up to the leaves, to great heights sometimes crossing over 400 feet.

After absorbing the vital nutrients and ingredients required, then a complex process begins to produce food for the plants, the process being photosynthesis. The factory for photosynthesis is located in the leaves, where water and salts are combined with carbon dioxide from the air to produce the food for the tree. Along with this process, trees create wood, as well as many chemicals, seeds and fruit of great facility and utility to mankind. Not only that the trees also remove carbon dioxide, a major greenhouse gas from the air, and all of these processes take place simultaneously, quietly within the physical structure of a tree.

That was just one way trees serve mankind, they also house animals and insects, a tree itself is a little earth, sustaining and housing different species of biological entities along with cleaning and providing for the environment. Tropical rain forests are also significantly important as they sustain more than half of the biological species on Earth, but our constant efforts have reduced them to the point where they only occupy less than six per cent of the land on Earth. It’s our human nature that we tend to take things for granted, just because something is there for so many years, we tend to think that it’s going to be there just like that, but that’s not how everything works, God has blessed us with so much to thank for but we are constantly finding new ways to have a “luxurious” life that we forget the very fact that trees are also being a “luxury” nowadays as not everyone has access to them.

They are getting less and scarce and that day will not be far when we would have nothing with us but regrets. We owe a lot to trees, its emotive power, they are the very lungs of this planet, they breadth life. Our luxurious lifestyle is reducing the forested area of our planet. This is resulting in degradation of the environment and the extinction of many key species. As it has been said, “Earth provides enough to satisfy every man’s need, but not every man’s greed.” If we continue with our ways we will reach a point where we have to make room for humans or trees and animals, and we all know that the decision will not be a tough one to make, and the aftermath would lead to massive extinction, first of animals and then of mankind which will not be the first time that a large proportion of the species on the earth have been extinguished.

Without trees we would eventually all die. Nothing on this planet will survive, as the population increases and trees decrease, carbon dioxide gets more into our environment and oxygen gets depleted, there will not be any oxygen to breadth, resulting in massive deaths all over the globe. Trees and the basis of life on earth, they have leaves and fruits which animals and humans consume, the provide shelter to animals, they bind the soil together, they act as a noise barrier, they are a home to many small insects and animals which are a source of food to larger animals and thus along the food chain, those animals are used for human consumption. Our food is based on animals and plants and if there are no trees, then there will be no animals and if there are no animals then there will be no food for humans to consume and this in turn will affect the food chain and the life cycle on earth. The balance of nature would be affected, chaos and destruction would follow.

As the human race progressed and new machines were invented to provide comfort and ease it was thought that the future would forever be about comfort and ease, that the future holds progress and luxury, that tomorrow will be better than today, those promising words were so attractive that in the race for progress and luxury, we forgot everything that money couldn’t buy or fix. Trees are just one part of nature that we are pushing to extinction, many important species or trees and plants have been wiped out which in turn have resulted in extinction of many animals. The heath hen is an extinct bird that was found in America, one of the major reasons for its extinction was rapid increase in human population, and deforestation. Each biological entity present on the face of this planet is linked to the other, and we humans are linked to them, with all are linked to our mother earth.

Nothing in this world is useless and the loss of any plant species or animal species is beyond repair, one specie wipes out from this planet and many other species are effected which were benefited by that specie, and soon a cycle is formed, a never ending cycle, slowly devouring each and every specie on this planet till in the end nothing is left on this planet. A chain of events has already started, slowly each and every specie is decreasing in number, animals raised in captivity are increasing, more animals are being put up on the “endangered list” along with many trees and plant species, as their number decreases, the list increases and just like that the time for destruction comes closer. A planet without trees would just be a lifeless planet, trees are the life of this planet and we owe it to them and to our future generation this much that we must act to protect them, we must educate and spread awareness because the longer we remain silent and oblivious, the quicker will be our end. (1290 words)

A Planet without Trees: A Nightmare or Our Future?. (2016, Sep 14). Retrieved from https://studymoose.com/a-planet-without-trees-a-nightmare-or-our-future-essay 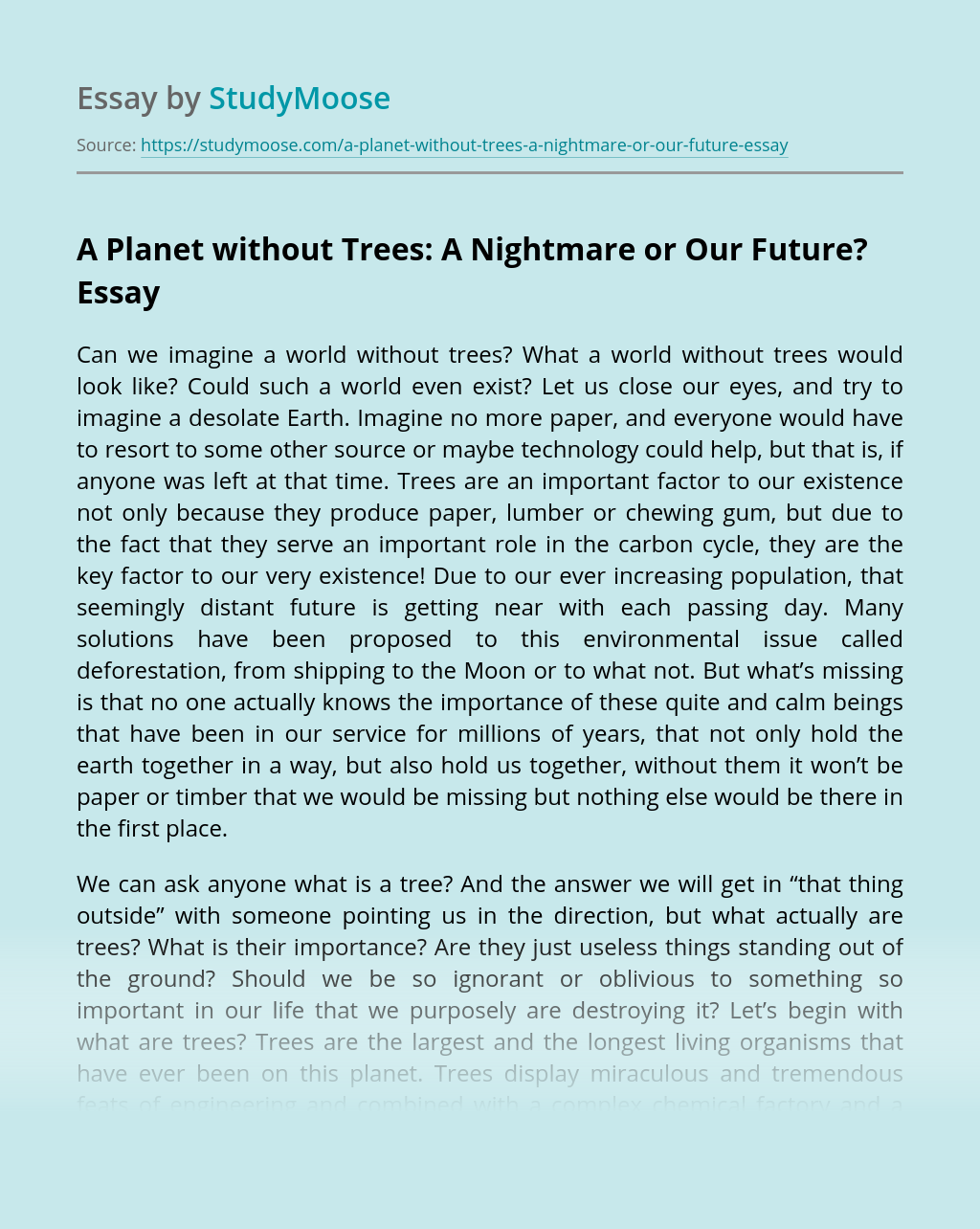