When I was in first grade, Barack Obama was elected as the 44th President of the United States. The week leading up to his Inauguration, my parents were unusually excited. As my mom was brushing my hair, I remember asking “What’s the big deal?”. My mother’s response was “We are witnessing history”. Not only was he an inspiration, but to me, he was the greatest President in American History.

Don't use plagiarized sources. Get your custom essay on
“ A Personal Opinion on Barack Obama Being the Best President in American History ”
Get custom paper
NEW! smart matching with writer

To start with the obvious, President Obama was the first black president in American History. At the time my fellow classmates didn’t realize the scale of this movement, but looking back at our country’s history, this was a big move. Even though it seems like a long time ago, the Civil Rights Movement was less than 50 years ago. This country was built on slave labor. Flash Forward to his presidency, and out of 80 policy positions requiring Senate confirmation, President Obama appointed more than women and minorities in 53.5%, compared with 25.

Frankly, I’m surprised most people forget that it was during President Obama’s Presidency that the mastermind behind 9/11, Osama Bin Laden, was captured and killed. That reason alone should move him to the top of our greatest presidents list. 9/11 was the single worst terrorist attack in American history, and changed the politics and policies of our nation for years to come.

On June 27th, 2015, America woke up to the news that same-sex marriage was legalized. This stopped 14 states where it was illegal to marry the same sex from enforcing their discriminatory laws on the LGBT+ community.

In a press conference, President Obama’s response to the ruling was something that stuck with me for the next two years. “When all Americans are treated as equal, we are all more free” (BBC 6). These words should apply everywhere in our country, because our diversity is what truly makes America great.

Though it was controversial, President Obama attempted to create nationwide healthcare for America, under the Affordable Care Act. It was opposed because it created too many costs on business, with many describing it as a “job killer”. However, studies show jobs in the healthcare sector rose by 9%. (BBC 8) No matter the cost, people deserve healthcare. Even though it was a flawed system, the fact that he attempted to create nationwide healthcare was a big step in the right direction.

No person is perfect, including our president. You can have the best intentions and still making the wrong decision, but the real test is what you do to correct yourself. Admitting you’ve made a mistake is something to respect in any person, especially a president. Future Presidents should admire President Obama not only for this, but for keeping a calm and level head when faced with discrimination. When President Obama was elected, he was threatened to be hung, people burned effigies of him, and tried to convince the country he wasn’t a true legal citizen. (Dionne 1) It may be the President’s job to act calm and serious, but as a human being, keeping patience during this is extremely difficult.

President Barack Obama, the first black president, led the way for progressive ideas. He took down the mastermind behind 9/11, and created nationwide healthcare. Not only this, but President Obama led the way for other minorities to take places in office. Soon, maybe we’ll have our first Hispanic, or even Muslim President! But for now I, along with the rest of America, will look back fondly and with respect to his presidency.

A Personal Opinion on Barack Obama Being the Best President in American History. (2019, Aug 19). Retrieved from https://studymoose.com/a-personal-opinion-on-barack-obama-being-the-best-president-in-american-history-essay 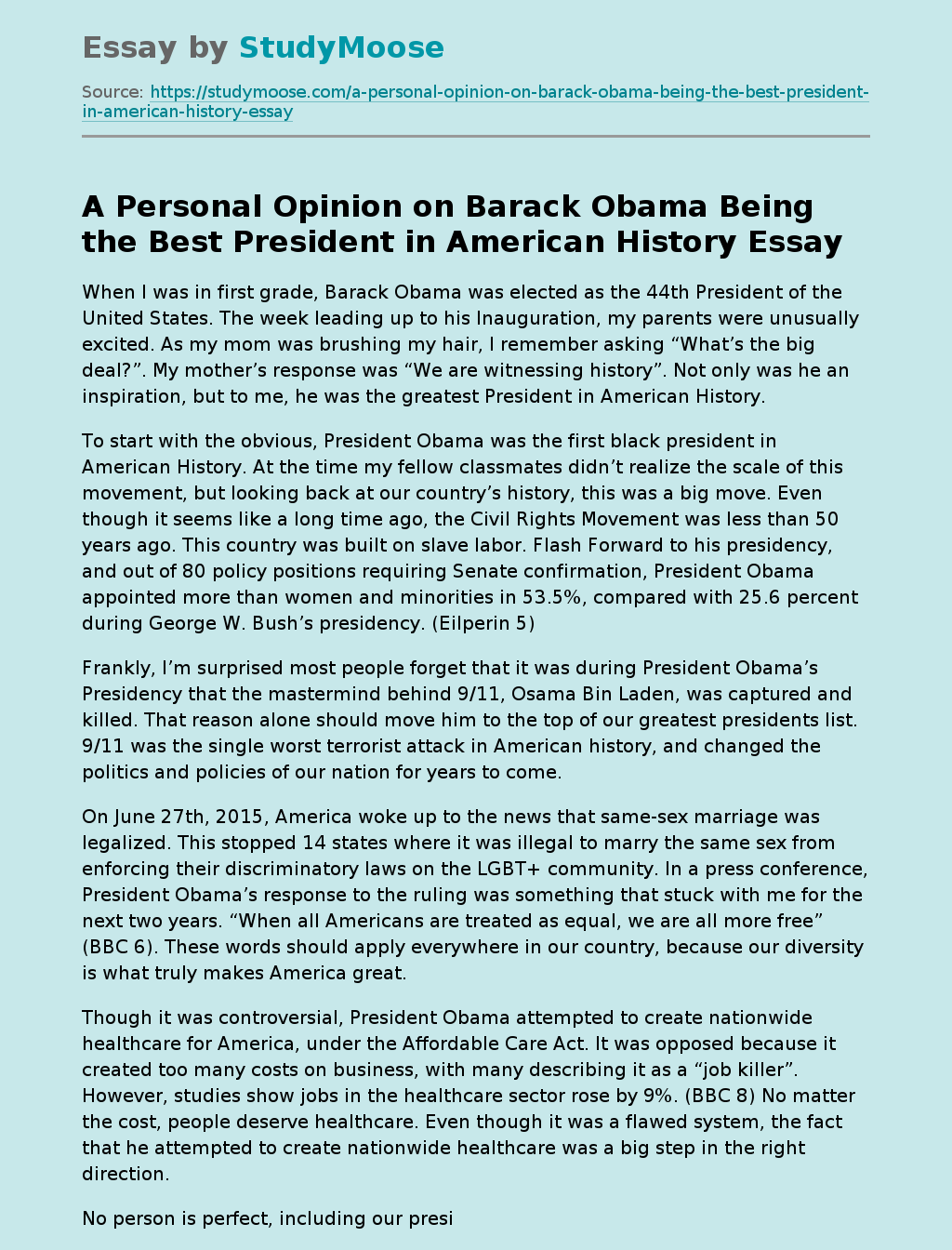