A Peaceful Woman Explains Why She Carries a Gun Essay

In the article “A Peaceful Woman Explains Why She Carries a Gun,” the author, Linda M. Hasselstrom, has a credible argument for carrying a gun. Hasselstrom has a solid ethical appeal and her argument had logic based on her many dangerous personal experiences. Although her argument is credible, she uses many fallacies to make it seem that if women have a gun they can protect themselves from men. Ms. Hasselstrom has ethical appeal because she used credible personal situations to support her authority to possess a gun.

Don't use plagiarized sources.
Get Your Custom Essay on A Peaceful Woman Explains Why She Carries a Gun Just from $13,9/Page

Because she was such a peace-loving woman, carrying a gun would be a fallacy. Her cause and effects gave this article logical appeal on the subject of carrying guns for safety purposes. Although she establishes good logical appeal, she failed to include statistics that could have made her argument more credible. Despite Hasselstrom’s characteristics of being a peace-loving, caring woman, a series of unfortunate dangerous situations caused her to feel the need to protect herself.

She states in the article “I am a peace-loving woman.

But several events in the past ten years have convinced me I’m safer when I carry a pistol. ” Although she feels that a firearm may be a security blanket for her, she struggles with the thought of possessing one. Before she eventually purchased a gun and obtained a license, she had taken some action to prevent this from happening. One action that she took to prevent from having to purchase a firearm was taking a kung fu class, which teaches self defense when someone enters your space without permission; another was to carry spray deodorant acting as mace.

She had the most difficultly convincing herself mentally that she could shoot a person. The sense of safety made her sometimes doubt her ability to ever shoot a person. The article states that “she was against firearms, and local police told us that mace was illegal. ” Although she did not like the thought of possessing a firearm, she felt as if it was her last resort. Throughout Hasselstrom’s many dangerous personal life threatening situations and her need to feel safe had emotional appeal, especially to women.

The threat of realizing that locking her windows and car doors and avoiding places that are known as dangerous, was not providing her the safety she needed. She then practiced shooting a gun and made it legal by purchasing a license. Although she sates in the article, “just carrying a pistol is not protection; avoidance is still the best approach to trouble,” she usually put herself in these life threatening situations. All through her many dangerous situations, her main fear seemed to be of men. Hasselstrom’s goal of reaching the feeling of safety was met.

She had many personal experiences that made her argument ethical and logical. Although after reflecting on the men that caused such fear in her life, she began to look at her situations from a different point of view. She states that “A pistol is not the only way to avoid being raped or murdered in today’s world, but, intelligently wielded, it can shift the balance of power and provide a measure of safety. ” Although she does not enjoy the thought of possessing a firearm she has realized that it is a measure of safety that she needs.

A Peaceful Woman Explains Why She Carries a Gun. (2017, Jan 05). Retrieved from https://studymoose.com/a-peaceful-woman-explains-why-she-carries-a-gun-essay 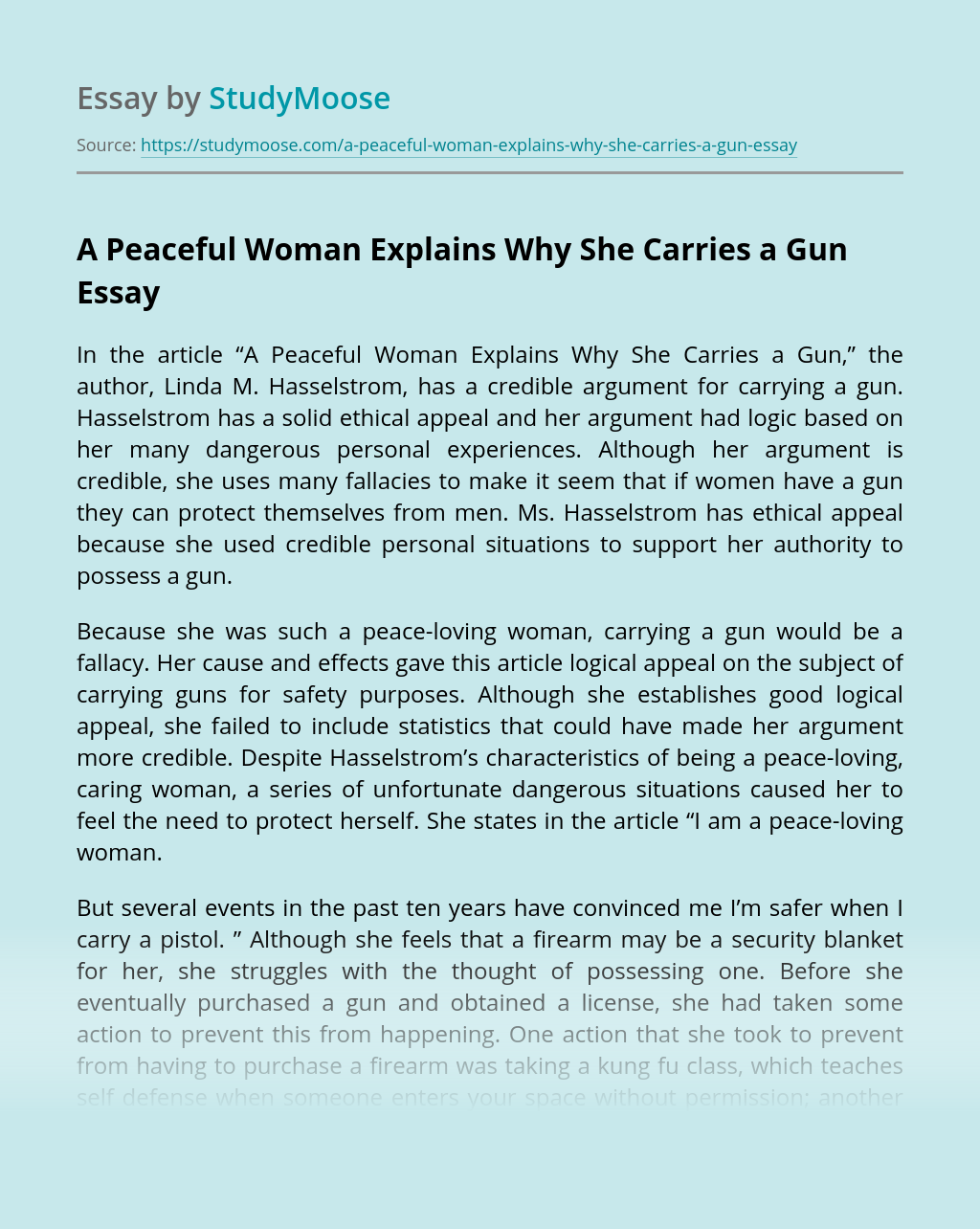