A passage to India - Symbolism

Analyse the symbol of the mosque to bring out the complex picture of Islam in the novel A Passage to India. Mosque is the holy place for all Mohammedans, and in the Novel ‘A Passage to India’ it has a greater significance. The first part of the novel is named as Mosque. E M Foster has a unique technique to use symbolism to convey the way society, religion, caste and treatment of different class of people.

Foster uses mysticism and complexity throughout the novel, yet he also has real interpretation of the journey the characters take from beginning till the end.

Turn in your highest-quality paper
Get a qualified writer to help you with
“ A passage to India – Symbolism ”
Get high-quality paper
NEW! AI matching with writers

Similarly, he brings out the qualities which transpire “what Islam is, and what it means to Aziz?” using mosque as the symbolism. For this purpose, Mosque is not just portrayed as a religious building but also the significance it has to Islam.

As a religion which is against iconography, Mosque is unlike the place of worship compared to Christians or Hindus, where there is a painting or idol is present for worship.

Instead, in a mausoleum there is none and just a courtyard that points towards Medina. The Mosque and Muslim faith point out that “There is no God but God”. The complexities build further when Foster writes about Aziz and his attachment to the Mosque in the beginning of the story. When we read that Aziz is walking down the lane towards the Mosque and is thinking of the place, and in his mind the attachment what it bring to him.

The Mosque serves as a place in his heart which no one can take it, the place where his mind and soul can rest and be at ease. With all tensions with British in India and the way the religions were colliding leading to multiple ideas, the educated were starting to question the olden ways of the religion. Here the attachment to Mosque and its symbolism provided not only a sense of how the religion stood in current world of Aziz, but it also provided happiness.

The Islamic doctrine dictated equality towards all worshippers under God. There was no priesthood hierarchy in the Mosque, but rather the place provided each person with one’s own way of worship. The house of God also designates an unreachable friendship with the God with every follower of Islam. Foster describes using Aziz, as the mosque has indeterminate sentiments towards the faith.

A passage to India - Symbolism. (2016, Apr 16). Retrieved from http://studymoose.com/a-passage-to-india-symbolism-essay 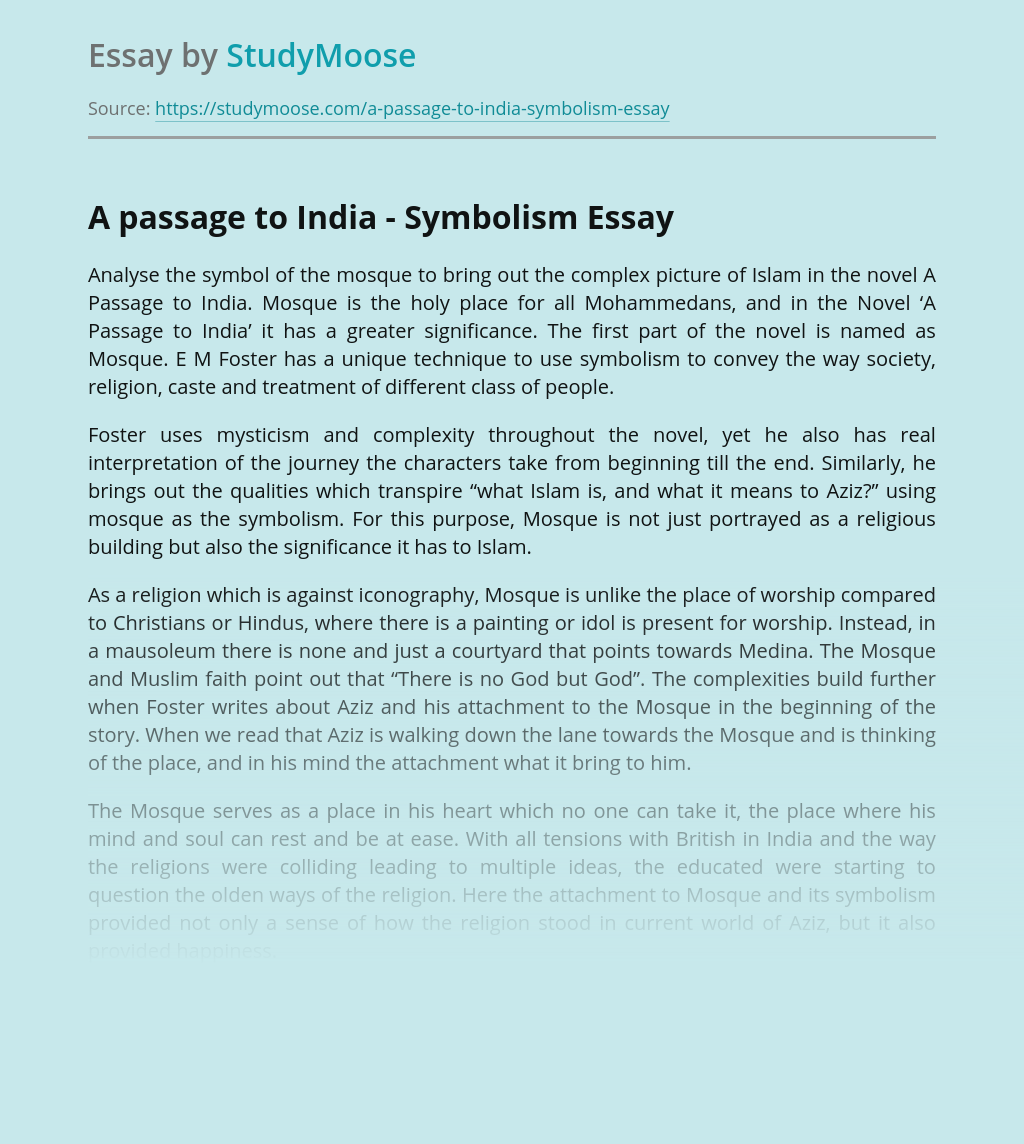 Turn in your highest-quality paper
Get a qualified writer to help you with
“ A passage to India – Symbolism ”
Get high-quality paper
Helping students since 2015
Stay Safe, Stay Original