“Ian had stopped rasping and ran a hand along the slat’s edge, trying to gauge the curve. All his years here, he had worked with straight lines. He had deliberately stayed away from the bow-back chairs and benches that required eye judgment, personal opinion. Now he was surprised at how these two shallow U shapes satisfied his palm. (347-348)

This passages is found towards the end of the book in chapter 10,”Recovering from the Heart-of-Palm Flu” While making a crib for his soon to be child, Ian comes across this thought.

Don't use plagiarized sources. Get your custom essay on
“ A Novel Saint Maybe by Anne Tyler ”
Get custom paper
NEW! smart matching with writer

This was around the time Ian and Rita had gotten married. It show how after Ian let and tried new things in his life that made him happier. Also this made him more open-minded as a person by seeing that there are more ways than just one to do things, and not being afraid of things that are different than what he is used to. Another interpretation is that Ian has been freed from his guilt and is now allowed to experience things, get on where his life left off so long ago.

This is really the resolution of the internal conflict that Ian has been going through since the climax of the book at the start. He is now guilt free and able to enjoy life. This also really effects the kids, Thomas, Agatha, and Daphne, because they felt like they had ruined his life by having to raise him, and so they still felt like they owned him.

Now they can feel content know that his life is moving forward. The Bedloe’s don’t have to carry their burdens and are all able to carry on now.

This connects to the essential questions and themes of Saint Maybe.

Theme #2,” Redemption can only be achieved through forgiveness of oneself and others,” This shows that Ian forgave himself because he changed his life for the better. Had he not forgave himself he would still be using “straight lines”, or still be the same Ian who felt guilty about causing his brother’s death being cautious not using his “personal opinion”, and not being able to have “U shapes” or happiness with his life. So, in a sense, by being able to create what he did show that he has feels redeem, by being able to move on and try new things.

This Passage also answers Essential Question #2, “ Does forgiveness need to be earned or should it be given? ” because it show how Ian had to work so hard to achieve the “satisfaction” of being set free from his guilt, or forgiven, for what he thought he did. Had he not tried he would have never been forgiven he would still lead a life of despair and depression and die not ever getting to enjoy his life. Another that can be answered is Essential Question #4,” Under certain circumstances do individuals deserve a second chance?

”Cleary Ian need a second for what had happened. Ian blamed himself at first but since he tried so hard and changed what he is used to doing just for forgiveness he is entitled to a “second chance” a chance to live again and have a good outlook on life, to grow up.

One literary device used in this passage is tone. The tone use here is happy and uplifting. This voice the author chose, by using worse like, “satisfied” and “surprised”, tells us he is now not the same depressed person that he once was and that he is content with where his life is now.

He has stop dwelling on the past and changed for the better. Another literary device is used here is foreshadowing. It foreshadows that the rest of Ian life, and all the Bedloe’s lives, will not be plague with what had happened and will live normal lives. By being able to try new things such as the “U shapes” it shows that he has moved on and is able to try new things without the fear of making a mistake. In other words he is no longer a “saint maybe” and is a new man. This passage is really is symbolism for Ian’s forgiveness and him being able to move on.

The “straight lines” symbolize Ian’s life before he forgave himself not able to put his own “… judgment and personal opinion” in things because he felt guilty for what he did to his brother and was afraid to do anything like it again because he was so traumatized. After he forgave himself he was able to do the “bow-back chairs and benches” because he is able to use his opinions. He is able to do so because he is now a different person, a free (forgiven) man, able to do as he pleases, not able to doubt himself anymore. So the change in his style of wood working really displays the change in his life. 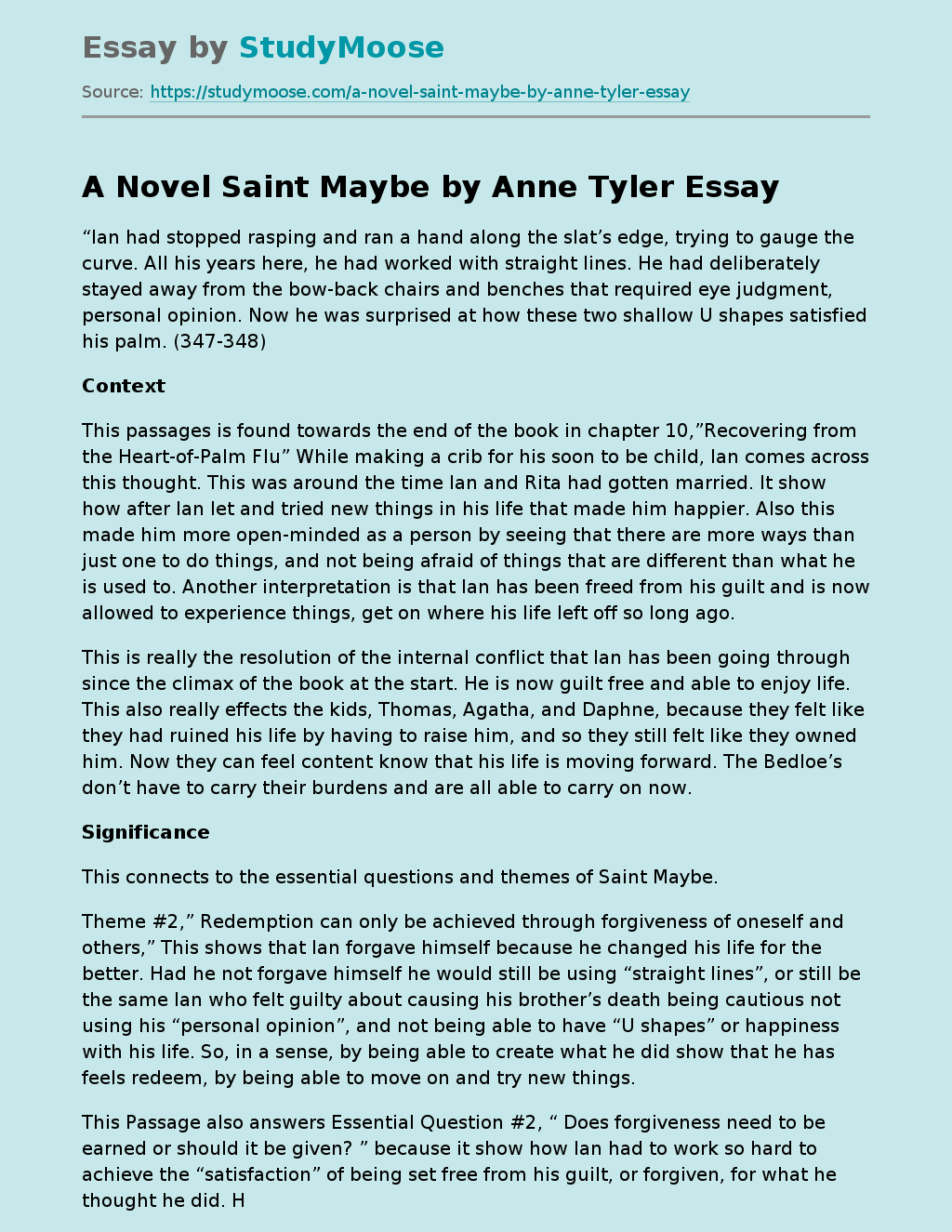