A note on social criticism of novel Joseph Andrews

Here the example of lady booby explains the point clearly. She loved Joseph as claimed by herself, but she wanted to keep their relation hidden from people, thus depicting the point of artificiality.

Turn in your highest-quality paper
Get a qualified writer to help you with
“ A note on social criticism of novel Joseph Andrews ”
Get high-quality paper
NEW! AI matching with writers

She intended to seduce him just for the sake to gratify her sexual appetite. She, by no means portrayed any signs of true love. This factor, fielding critised by employing the character of lady booby as discussed above. Moral degradation

Another social evil of that time, certainly was that the people look down upon morality with an eye of contempt.

They degrade it in all possible ways. Here the example of Joseph can be taken into consideration. His inner goodness was ridiculed in the very society. Lady Booby once mocked him of his being maintain an ally of morality, when she herself as of superior stature had discarded her own conscience for him. Sympathy within the same class

Sympathy is a factor that prevails only within the same class. As the example of postillion who provided Joseph with his coat when he had nothing to cover himself and was in a very miserable condition, states very well the fact.

Indeed, both belonged to the lower class. Lack of charity

Charity, a quality not so common in common man. When parson Adams consulted Parson Trulliber as his Christian brethren, with the aim of expecting some charity to pay off his bills of the inn they stayed at, got nothing but rejected in the face is just a demonstration of the fact of lack of charity. Duality in nature

Parson Barnabas presents himself as a character with duality in nature. A glutton and drunkard, yet a parson by profession, indeed a presenter of dual sides. Such characters as this do exist in our society and are tainting the fabric of world with their paint. Lack of knowledge

The world also has people who claim the professions they have no thorough knowledge of. They are professionally incompetent, yet roam around in the society like foolish quacks with pride. The surgeon and parson Barnabas are such examples. Lust of ladies

Lady Booby and Mrs.Slipslop had amorous disposition. And to gratify their sexual apetite they look upon Joseph with an eye of lust. Consequently, because of their intentions they lay Joseph open in the jaws of chastity. Such people as these should be placed infront of mirror, to render them with the realization that what creature have they become. Height of jealousy

Jealousy, a trait found very well-groomed in society. Fielding has portrayed this social-ill as one of the core aspect in his novel. Mrs.Slipslop out of extreme jealousy blamed Joseph of being an ill-character and of amorous inclinations. Indeed, a very dangerous trait. Hypocrisy can also be attributed to the consequence of height of jealousy. The higher class in the novel is portrayed as highly submerged in hypocrisy. False promises

A trend common in that society was to make promises and then break them. While Joseph, Fanny and Adams are on their way, they encountered one such fellow and fell for his promises. A trend that ought be condemned with solemn attitude.

Corruption
People like the surgeon and Parson Barnabas are perfect examples of tainting the society with corruption and morally ill-standard behaviour. Such follies and vices of society depict very well a social criticism, in the light of book I and book II.

A note on social criticism of novel Joseph Andrews. (2016, May 17). Retrieved from http://studymoose.com/a-note-on-social-criticism-of-novel-joseph-andrews-essay 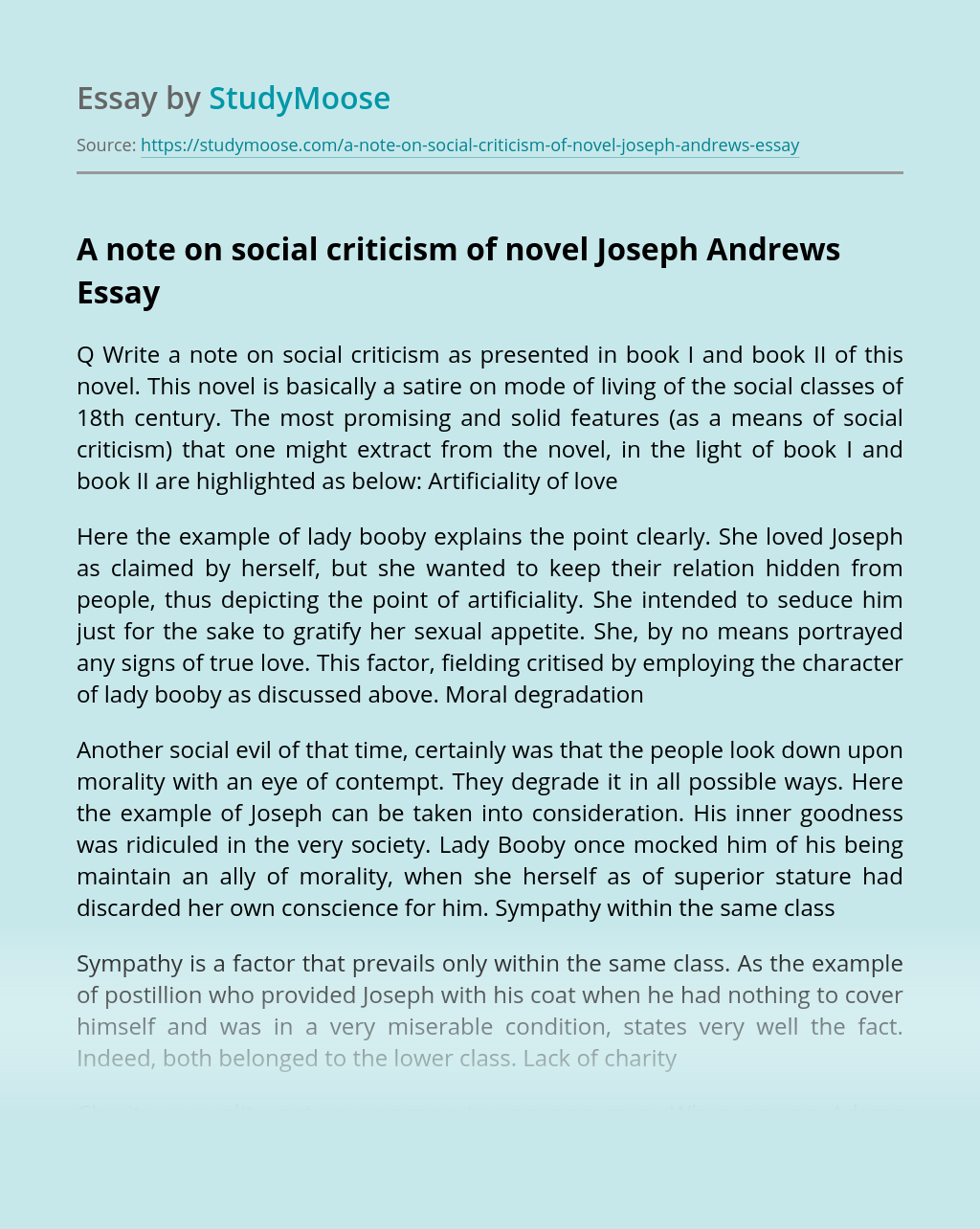 Turn in your highest-quality paper
Get a qualified writer to help you with
“ A note on social criticism of novel Joseph Andrews ”
Get high-quality paper
Helping students since 2015
Stay Safe, Stay Original