A New Chance at Life

“It was the best of times, It was the worst of times…”(Dickens 1). Throughout this book many people were losing hope, yet many were gaining inspiration. As the book continues many characters go through a stage of rebirth and get a new chance at life. In A Tale of Two Cities, Dr. Mannette, Sydney Carton, and Charles Darnay are all affected by the theme Resurrection. Resurrection the main theme of the book is defined as “rising up from the dead, the resumption of life” or known as rebirth.

Don't use plagiarized sources. Get your custom essay on
“ A New Chance at Life ”
Get custom paper
NEW! smart matching with writer

Dr. Mannette experiences resurrection in A Tale of Two Cities. Setting the book into motion Dr. Manette is released from the Bastille after 18 years of solitary confinement. Manette was took from his wife who was pregnant at the time and imprisoned. He was driven to insanity. During this time Manette forgot his name and worked with shoes to pass time. He was put into jail for knowing information that the Marquis St. Evremonde did not want to get out.

Dr. Mannette is released and picked up by Lucie and Mr. Lorry. He refers to himself as “One Hundred and Five, North Tower”. He only knows his prison life and he constantly goes to just randomly making shoes, he picked this up in jail. He has forgotten what it is like to not be in Prison. Lucie helps him regain his old self and helps his go back to normal. Lucie shows her love for him from the beginning. His rebirth starts in chapter 6 of Book the first when Lucie states “that the agony is over and she has come there to take him from it.

Dr. Manette recovers gradually with the help of family and friends. Lucie is dedicated to assisting her father. After Dr. Mannette returns to England, the doctor is starting to return from his crazy state of mind. He is able to make full conversation at Darnay’s trial. As time goes on Manette starts making shoes less and less. By chapter 7 of Book the Third, Dr. Manette does not make shoes anymore or refer to himself as a different name. By the end of the book, he is fully recovered from insanity. Lucie has nursed her father back to normality. Where he is rebirthed, but not only has Lucie helped Dr. Manette she has helped Sydney.

At the start of the book, Sydney has no hope and thinks life as worthless. He is a clerk for Darnay’s attorney, which the attorney receives all the credit, yet Carton is responsible for all the ideas. Although Carton would like his life to be made of something and for him to make a difference he has a rather boring, worthless life. Lucie will try and save her friend Carton as she did her father. In chapter 13 Carton confesses his love to Lucie and tells her how he feels about himself. He describes himself as a “self-flung away, wasted, drunken, poor creature of misuse.”

He also explains how there is no hope for making his life better. Lucie encourages him and gives him motivation. Lucie helps Carton to believe again. Lucie uses her caring personality to lead Carton to resurrection. When Carton leaves he tells her, “For you, and for any dear to you, I would do anything.” (Dickens 159) Carton now has a hope for life knowing the woman he loves, has faith in him. He strives to do better and to succeed. He stops getting drunk and becomes a better man.

In another instance in which someone is “reborn” involves Charles Darnay. Darnay is a wealthy aristocrat, but lives a modest life. He is married to Lucie. At the start of the book he is put on trial for treason in England. He is thought of as a spy. Most people think he will be found guilty, which means they foresee death. The court notices similarities between Darnay and Carton. He is then set free due to the resemblance. Sadly, later on Darnay is later sentenced to death in France due to a crime his father and uncle did long ago. The day of the execution, Carton has an unexpected plan. He arrives at the prison and trades places with Darnay. Darnay leaves the prison with Carton still in his place, waiting for death. Carton only does this due to promises to Lucie, that he would do anything for her. Carton sacrifices his own life for Darnay, and Darnay is given another chance at life, thus being “reborn”.

The theme of resurrection is shown through characters. The characters that experience this are Dr. Mannette, Sydney Carton, and Charles Darnay in A Tale of Two Cities. Dickens gave many characters a new chance to change there life. He let Dr. Mannette reunite with his daughter. His daughter Lucie also helped Sydney Carton start over by giving him hope for his life. Finally, he gave Charles Darnay a unexpected chance to relive his life and escape death. As the book comes to an end all of them bettered their life, even if it met hard work. 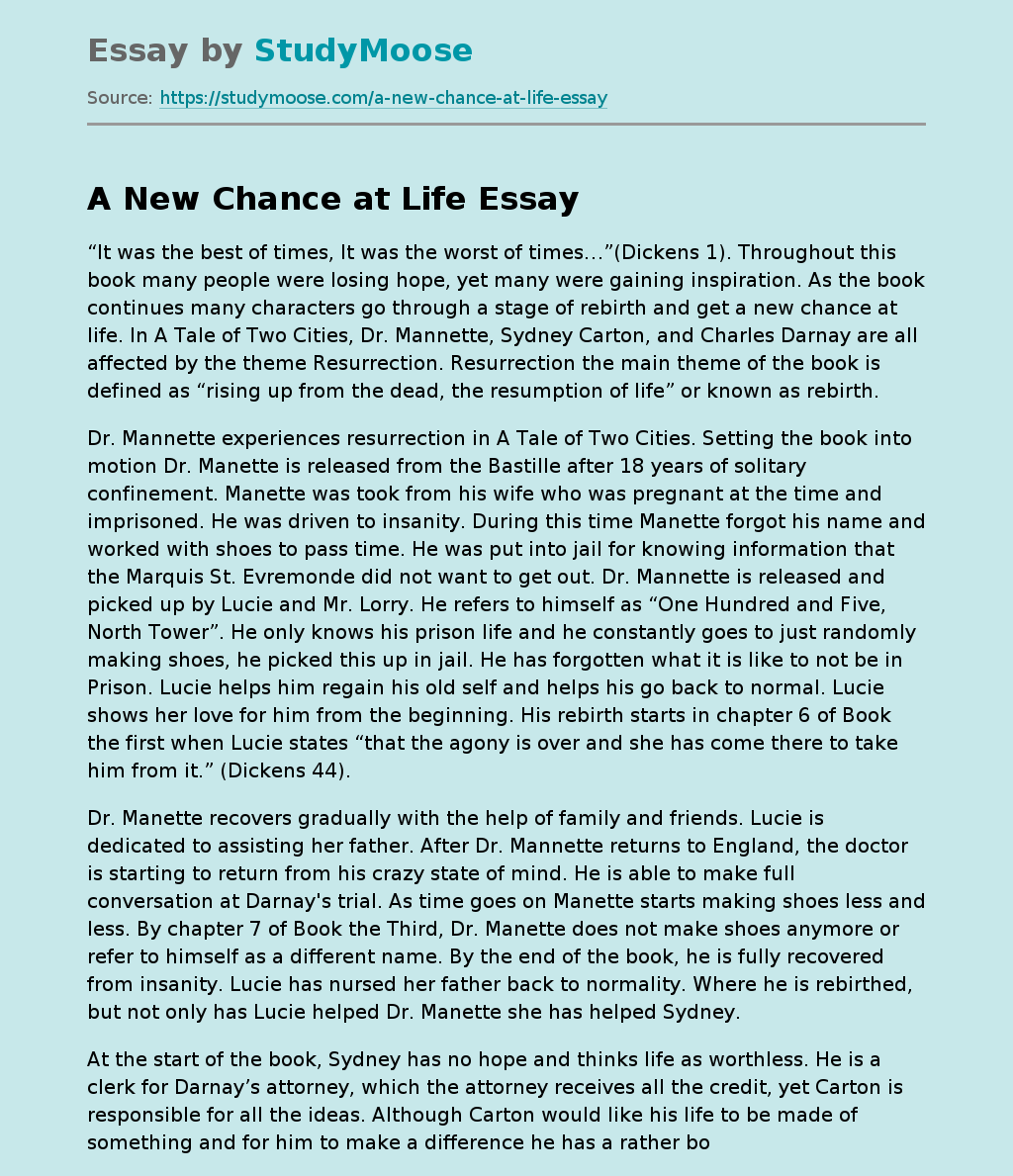