ducation is one of the most important pillars of the nation’s development. Education is a weapon which can change the world. Primary education is the base for the students. So a country should have a very good curriculum for the students in their Primary school study. A curriculum, which will make each student withstand the future competition and will lead to country’s development. So if a nation have the same national curriculum it would be beneficial in so many perspectives.

Don't use plagiarized sources.
Get Your Custom Essay on A nation should require all of its students to study the same national curriculum until they enter college Just from $13,9/Page

If a nation have same national curriculum then it would be easy for government to construct a nationwide program to train teachers. It would be easy to evaluate students on the same basis. Same national curriculum will decrease the efforts to construct the region wide education course in country. In India we have Central Board and State Board. Central board is followed by some states, while all other states follow a separate State board program.

Each state has its own Program of primary education including different evaluation system, marking system and subjects to study.

This requires a big management to maintain the track. So same national curriculum will cut down these efforts and can make use of these efforts in improving the education system. This approach would be beneficial for the students in terms of options available. The same curriculum will open the doors of all the colleges and courses available there nationwide. Students will have a healthy competition environment. Students can study variety of courses and will be able to go in desired college.

In the current system of a student wants to go in any other college belong to other state then he has to give an entrance examination and it differs according to the course he wants to study. But if this approach get followed by the nation then it would be easy for a student to get this rid of this. A student can follow his heart and make his dreams true. It would be propitious for them who have to frequently transfer their locations because of their service such as in military services, government services etc.

Currently it is very difficult for their children’s to accommodate in new environment, especially school and its curriculum. For example in India If a student belonging to Maharashtra went to study in Chennai then it would be difficult for him to get into routine. He has to start again in new way in the new environment. But if the curriculum would be same at national level till college then it would be easy for them to continue their study without any difficulty. But though this approach is good enough, it may create some problems while implementing it at national level.

Like to change the established system and to implement the new on nationwide would take significant amount of time and efforts. Students in the middle of the primary education may find it somewhat difficult to get adjust to new curriculum. As students would be having more options to choose then it might lead to confusion while making choice. Those students who don’t want to leave their native place or state then it would be difficult for them. For example if a student don’t get admission I any college residing at his place then that student might have to go another place. But overall this approach is beneficial enough to implement. Though it would require some efforts and time once get implemented it would be best.

A nation should require all of its students to study the same national curriculum until they enter college. (2016, May 05). Retrieved from https://studymoose.com/a-nation-should-require-all-of-its-students-to-study-the-same-national-curriculum-until-they-enter-college-essay 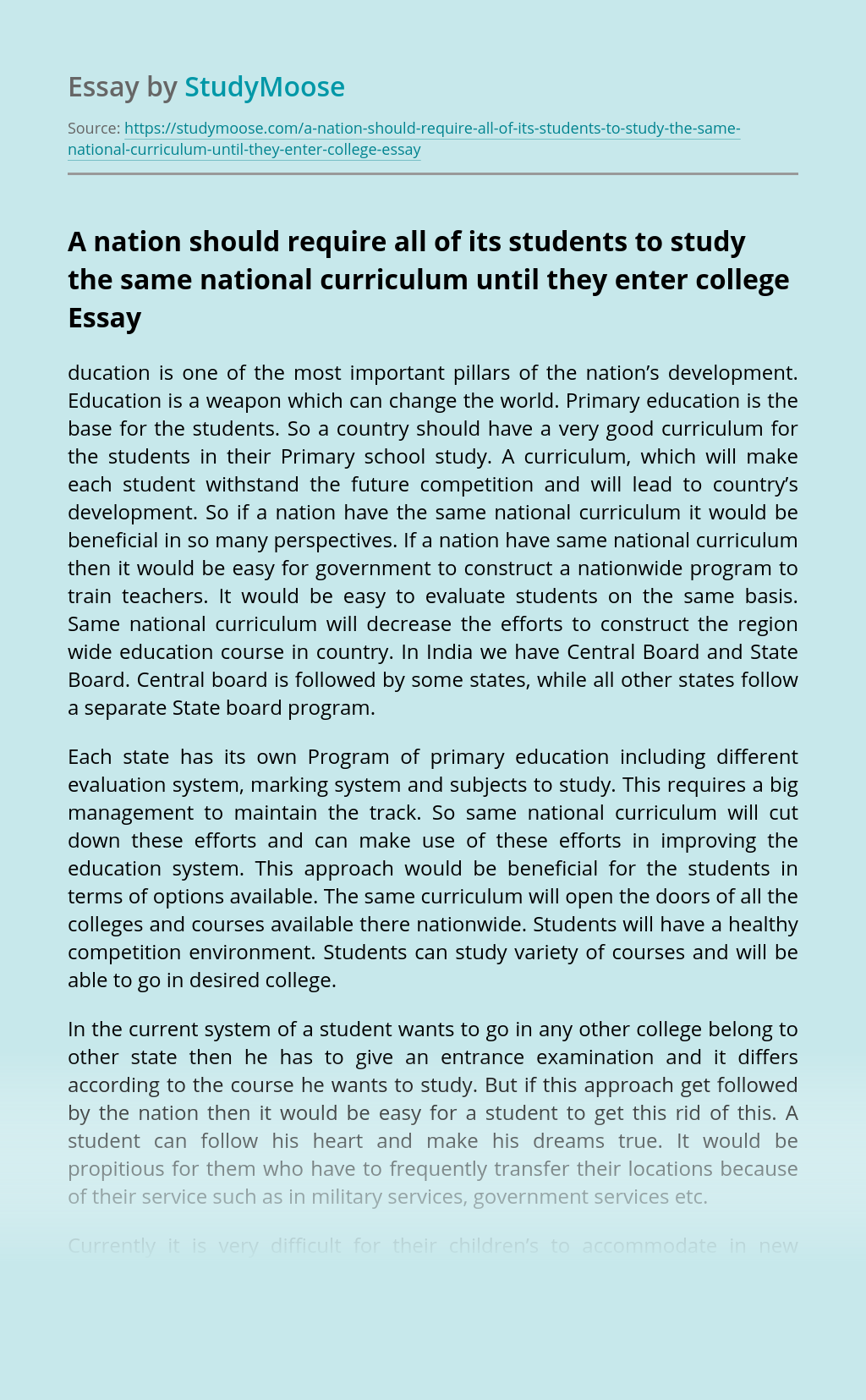 I would like to begin my speech by asking if anyone has ever felt like giving up on their education? Like myself, I am sure most will answer ”Yes”. Today, I would like to speak on the importance of staying in school and completing your education. Hopefully what I have to say can both inspire...

Paulo Freire said that education can be construed as an exercise of domination if it manipulates the naivete and innocence of the students. This kind of pedagogy tends to use authority heavily so that the students would learn to accept such authority without challenging it. They become subservient to the interests of the authorities who...

Brief Summary of Daniel Willingham - Why Don't Student Like School

The answer to the question ‘why don’t students like school’ was explained very clearly on the first chapter. It was made clear that our brains are slow and unrealiable. Our brains tend to avoid thinking, which makes it unlikely for us to like thinking. But apparently our brains release some amount of dopamine when there...